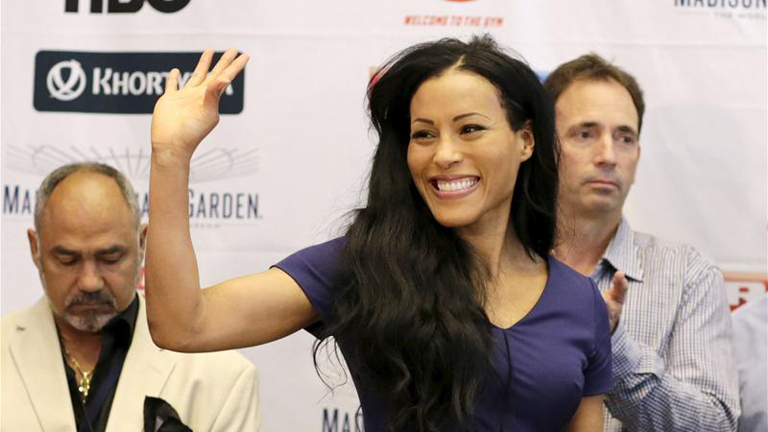 Cecilia Braekhus is not a great female boxer. She is a great boxer, period. One of the greatest in the world, in fact, so let us spare ourselves the trouble of employing qualifiers when referencing a master and her craft.

In her ten-year professional boxing career, Brækhus has defeated every opponent she has ever faced, acquired every major championship title available in her division, ascended the pound for pound rankings to become the best fighter in the sport, and firmly secured a place in the boxing hall of fame.

It seems that the only thing she hasn’t accomplished is a fight in her home country of Norway in front of her family, friends and thousands of fans.

That all changes this Saturday night when Brækhus puts her WBC, WBA, IBF, WBO and IBO titles on the line against French knock-out artist Ann Sophie Mathis at The Spectrum in Oslo. The bout is a rematch of their 2012 fight, in which Brækhus earned a unanimous decision victory.

“The support I have received has been amazing, from my fans to the public and politicians.” said Brækhus to Boxing News about her homecoming. “It definitely feels different than being in a foreign country preparing for a fight. I get to be at home surrounded by friends and family. I have had many proud moments in my career. From winning a title at age 17, to now being able to fight at home in front of 10,000 fans. This is very special for me.”

Brækhus returned from a foot injury in February of this year and retained her titles against former WBO super lightweight champion, Chris Namus. There seemed to be no signs of ring-rust and she didn’t miss a beat, winning every round on each official scorecard.

Since then, Brækhus has been out of the ring for seven months, but stayed active, commencing camp for the Mathis fight in the latter parts of summer.

“Training has been great. I feel 100%. Thankfully my injury wasn’t career-ending. Of course, now I have to be more careful with how I train and how I eat. I have to rest more. But I have a great medical team that supports me in camp and monitors my training very closely. As long as I pay attention to them, things will go well.”

Boxing was illegal in Norway from 1981, the year Brækhus was born in Cartagena, Colombia, until 2014, when the ban was finally lifted and the sport was allowed to return to the Scandinavian country.

During that span, you could be jailed for months if you broke the “knockout law,” so aspiring boxers had no choice but to leave the country to pursue their dreams of becoming a professional fighter.

As a teenager, Brækhus remembers sneaking out of her home, unbeknown to her parents, to attend her training sessions- a risky affair, not only due to the chance of getting caught but because her apartment was on the fourth floor.

She moved to Berlin in 2008 to hone her craft, training in the rigorous “German style,” and building an impressive and perfect resume.

After shifting her promotion from Sauerland to K2 in 2015, she paired up with Wladimir Kilitschko’s trainer, Johnathon Banks, and a more mature and well-rounded Brækhus is out to conquer new territories.

“Working with Johnathon has been great,” continued the Norwegian champion. “In Germany, the style is very rigid. It is very focused on physical training and on defense and, as a result, I was a bit stiff. Johnathon focuses more on the boxing which has made camp, overall, a bit more relaxed. He has really helped to loosen me up without losing the defense. I can say that I am enjoying the sport much more these days.”

Having a more “relaxed” training camp, and spending time at home with friends and family prior to one of the biggest fights in your career, may spell trouble for some. But Brækhus assures hat her homecoming hasn’t been a distraction, adding that she is one hundred percent prepared and focused on defeating Mathis.

Mathis is a powerful opponent, with a 72% knockout ratio and a list of victims that includes UFC star, Holly Holm. But she is coming out of a long lay off to fight Brækhus. She moved up to super welterweight after her first fight with with her Norwegian rival and hasn’t fought at 147 pounds in over four years. On Saturday night, she guarantees a stronger and better version of herself than the one that first faced Brækhus in 2012.

In response, Brækhus insists that she is not taking her opponent lightly.  “My first fight with Mathis was definitely the toughest of my career,” she said. “She is a strong fighter and her primary goal is to come forward and knock you out. I am very focused on this fight and am prepared for whatever she will bring.”

A win for Brækhus on Saturday would be her 29th. With a storybook homecoming, a hero’s reception, a burgeoning promotional company, and every possible accolade on her mantle, one is left to wonder what else Brækhus hopes to accomplish.

“My only goal right now is to defeat Mathis,” she replied with the focus and professionalism that we’ve come to expect from her.  “She is a tough opponent and I refuse to look past her. After Saturday, we will see what the future brings.