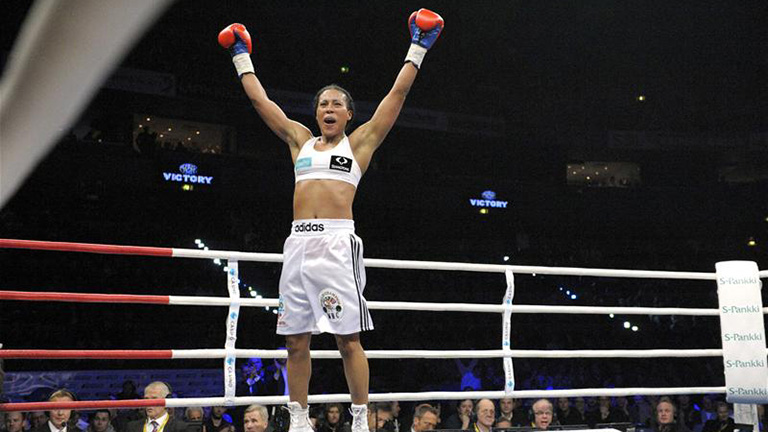 The consensus female pound-for-pound best boxer in the world retained her WBC, WBA, IBF, WBO, and IBO world titles in her first match ever in her home country of Norway. It was a long awaited rematch of their 2012 fight, in which Braekhus came out victorious.

In the first round, both fighters were slow out of the gate but Braekhus was the first to launch an attack. She was effective with the jab early on but seemed jumpy on defense and as she worked he way around the ring. Perhaps it was a sign of the jitters, fighting at home in front of her family, friends, the prime minister, and nearly 10,000 adoring fans.

Partway through the first, Braekhus landed a thudding straight right which landed flush on Mathis but her opponent quickly scored off the counter, backing the champion off momentarily.

The opening round was still in contention in its closing seconds, until Braekhus landed another straight right that staggered her rival.

The second stanza started with Mathis sporting a fresh cut over her left eye, a weakness that Braekhus immediately tried to exploit. The Norwegian hammered a solid right hook over Mathis’ guard which hurt her rival and caused her to retreat.

Braekhus caught up with Mathis in the center of the ring and landed a left jab, straight right combination that seemed to hurt the French challenger.

Mathis clinched and appeared to lose focus, perhaps anticipating a break from the official. Braekhus took full advantage of her foe’s lapse in concentration, landing a thudding right hand that sent Mathis reeling back against, and partially over, the ropes- protect yourself at all times, they say.

The defenseless Mathis was then smothered by the champion and the referee had no choice but to stop the fight at 1-05 of the second round.

With the victory, Braekhus improves to 29-0 and celebrates a win for the first time as a professional boxer on home soil.

After accomplishing everything that theres is to accomplish in the sport at 147 pounds, Braekhus may consider moving up in weight to take on a new challenge at junior middleweight. Or perhaps, she’ll entertain a showcase fight against another top fighter from a different discipline.

Braekhus and mixed martial arts competitor, Cris Cyborg, traded barbs on social media last month about a possible clash. Cyborg, whose real name is Cristiane Justino, is a Brazilian powerhouse that competes in the the Ultimate Fighting Championship.

Unable to secure a big money fight in MMA, Cyborg has stated that she is open to crossing over to test herself in the squared circle against Braekhus- if the money is right.