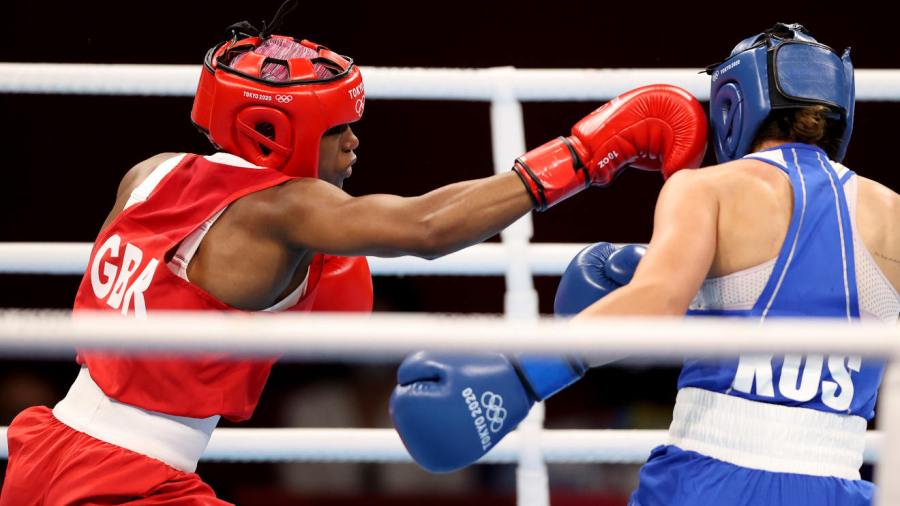 Caroline Dubois and Pat McCormack are victorious, but GB's Cheavon Clarke is eliminated on the fourth day of the Tokyo Olympics

CAROLINE DUBOIS and Pat McCormack won their opening Olympic contests at the Kokugikan Arena in Tokyo on Tuesday (July 27), but their GB team-mate Cheavon Clarke was eliminated.

Dubois’ swift southpaw jab carved out rounds against Kosovan lightweight Donjeta Sadiku. The latter barreled into the Londoner, making it awkward at times, but the quality shots came from Dubois, securing her the unanimous decision win.

“The fight went as planned. We knew she was a tough opponent and she would try and make it as messy and scrappy as possible. She is older and has more experience than me and has fought at a major level. She has been to Worlds, Europeans, so she has fought the best. I knew she was going to be tough and she wanted it just as bad as me and it was going to be a battle of wills,” Dubois said. “Normally I’m first on, so there’s no pressure like that, but this time it was building, building, building. Seeing people win, seeing people you know get closer to their goals. I just couldn’t wait to get in the ring. I was a bit nervous, but I got through.”

“It’s definitely different to what I expected. I remember watching Katie Taylor and Natasha Jonas [at London 2012] and when they walked out the crowd went absolutely mental. The noise was unreal, I was just blown away by it. Here, there was no crowd. That atmosphere ain’t here, but the pressure is still there. This is the Olympic Games, this is where dreams are made or broken. We all want the same thing. We are used to fighting in empty arenas when we go to small tournaments so even if this is not much different to what I am used to the pressure is still there,” she continued. “You can sense that, feel that. There is an intensity and you just want to get what you can out of it.”

Belarus’ Aliaksandr Radzionau showed grit as he looked to charge down Pat McCormack. But the world number one was too clever for him, whipping in hooks and solid lead lefts as he manoeuvred round the ring. McCormack emerged without taking damage and winning a unanimous decision. “It was a good one to get out of the way. He is a decent fighter, messy, but I just hit, turned him. I had to be careful as he was being a bit devious with his head but I’m through to the next round,” the Briton said. “I’m happy being top seed. I always reach my seedings in tournaments so hopefully I will reach it in this one and bring that gold medal home.”

“It’s better fighting with a bigger crowd, when you catch them with a decent shot and the crowd is cheering, it gees you on. It’s a bit quiet here, but I’m here so that’s all that matters,” he added. “Winning the Olympic gold medal, I don’t think there is a bigger prize in sport.”

Cheavon Clarke worked hard against tall Brazilian southpaw Abner Teixeira. He directed to his attacks to the head and the body, but Teixeira could land long shots and edge him out on a split decision.

Japanese welterweight Sewonrets Okazawa took Cuba’s Roniel Iglesias, a London 2012 gold medallist, to the wire. Iglesias had a point deducted for hitting behind the head and fought hard in the third round to dig out a split decision win. “I thought I had done enough to win at the end of the last round. I thought I was really good in the beginning and was boxing well but in the latter half I couldn’t show my strengths and the weapons that I have,” Okazawa said. “I needed to use them more, be more aggressive in the final round. I need to drill myself more now, work more often.

“I wanted to make the Japanese people proud. I gave my best and I hope that my teammates that follow me into the ring can make our people proud.

“I love my sport, so I will try my best from now on. From these Games I feel a lot of people support me and I want to thank all those people.”

America’s Delante Johnson took a very creditable result over Kazakh welterweight Ablaikhan Zhussupov, turning around a first round deficit to win a split decision. “At the end of the first round my coaches told me I was going a bit too slow, so I had to get more aggressive and throw more combinations and body shots,” he said. “I’m just keeping it one fight at a time now, so I can go get that gold medal.”

US welterweight Oshae Jones also prevailed on a split decision, beating Mexico’s Brianda Cruz Sandoval. “I was kind of rusty. But I’ll be happy to get back in the ring to show the world I’m better than that,” she reflected. “I need to work on my movement, and my angles. My legs were kind of staying behind as I was boxing.”

The big shock of the day came when Enmanuel Reyes, a Cuban-born boxer who is now a Spanish citizen, knocked out Vassiliy Levit, the Kazakh heavyweight who had been extremely unfortunate just to win a silver medal at the 2016 Olympics. For Reyes that sets up a fascinating quarter-final showdown with leading Cuban Julio La Cruz on Friday (July 30).

Morocco’s Youness Baalla lost on points and then was subsequently disqualified for ‘intolerable action’ as he bit New Zealand heavyweight David Nyika during their contest. “He didn’t get a full mouthful,” Nyika laughed afterwards. “Luckily he had his mouthguard in, and I was a bit sweaty.

“I was bitten on the chest at the Gold Coast Commonwealth Games but come on man, this is the Olympics, get your s**t together.”