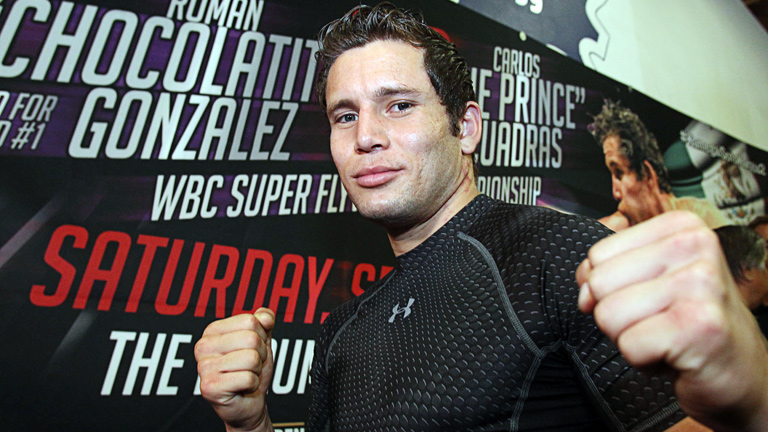 Cuadras will be defending his WBC Super Flyweight world title on September 10th against Managua, Nicaragua’s Roman “Chocolatito” Gonzalez, the man that many boxing experts believe is the best fighter in the sport.

“I know what a great career Gonzalez has had and it really motivates me to train and get ready to fight him,” said Cuadras.

Cuadras jumped rope and shadowboxed for the media members in attendance, showing off his version of the “Ali Shuffle” while taunting his impending opponent, “You better hang on, Chocolate!”

The Mexican champion was all smiles as he showed off his speed and power on the mitts with trainer Rudy Hernandez and took questions from the media.

Does it bother Cuadras that the focus has been mainly on “Chocolatito” in the build up to their September 10th clash?

“It doesn’t bother me,” said Cuadras. It’s normal He is a three time world champion. He has had a longer career. In fact, I admire him. When I first met him in Japan he was already fighting for world titles. I was barely fighting 6 and 8 rounders. So I recognize the great career that he has had but people’s attitude will change on the day that I beat him in the ring.”

Defeating the number one pound-for-pound fighter in the world would immediately transform Cuadras into a superstar, especially in his home country of Mexico.

The Guamuchil, Sinaloa native is certainly proud of his career thus far but doesn’t deny the fact that defeating Gonzalez means reaching the pinnacle. “I love boxing and I love what I do and I am very excited about this fight, said Cuadras. “This is the fight of my life.”

Sharing the day with Cuadras was his countryman and former world title challenger Jesus Soto Karass, who is scheduled to fight on the Gonzalez-Cuadras undercard against Yoshihiro Kamegai.

Here are some of Soto Karass’ quotes from the day:

“I feel the same adrenaline and the same excitement for this fight, the only things that have changed are the location and the main event. I am now sharing the stage with my countryman and world champion Carlos Cuadras.

It feels great to be fighting on such a big event. A victory here can really put me up for a bigger fight in my career.

“I feel great, this training camp we have focused on improving things from the first fight. Working on hand speed, on keeping my distance, but as we all know inside the ring it can be unpredictable and we can have an old fashioned brawl for all the fight fans.

“I don’t expect this fight to be the same as before, I can only hope that it turns out as great for all the fight fans.  What I can say is from my part is that I am prepared for anything, and will deliver a victory and an exciting night of boxing at the Forum.”