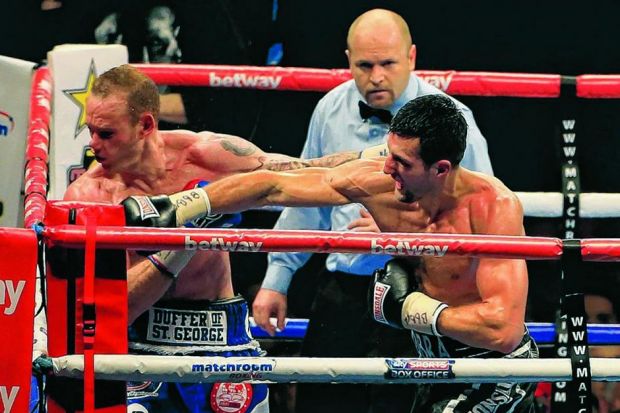 CARL FROCH announced today that he would retire from boxing.

Adam Smith, head of boxing at Sky, paid tribute to Froch. “He had the pedigree: he was a great amateur and unbeaten pro, Mick Hennessy had done a great job getting him in the Super Six tournament and on the world stage. Carl’s a throwback, a warrior, what he lacks in skills he more than makes up for in grit, determination, engine and chin, he’s been phenomenal entertainment, taking on everyone. Even when he’s been beaten it’s not dampened his spirits, he’s just got back on the horse and done it. He hasn’t ducked anyone, he’s fought Jermain Taylor, Andre Dirrell, Jean Pascal, Andre Ward. People who have a go at Froch need to look at just what he went up against – and where. When he came to us, he was established, he was ‘The Man’ in the trade and he helped Matchroom and the likes of Kell Brook, Luke Campbell and Anthony Joshua. I’m sure a lot of young fighters have been inspired by Carl as they’ve watched him and what he’s put his body through; he’s earned his corn more than anyone I’ve seen in boxing. He may not have had the knockout power of Naseem Hamed or the skill of Joe Calzaghe, a three-time ABA champion, but he had bucketloads of grit and a never-say-die will to win. He’s the ultimate gladiator,” Smith said.

Now his fighting days are past, Froch will join the Sky broadcast team. “Carl has been umming and ahhing for a long time about this. We spoke after the first George Groves fight in Manchester and he was saying his body was feeling it and, as much as he wanted a rematch – the controversy made it a great story – he was worried his body wouldn’t get him through a whole camp. After the rematch at Wembley in front of 80,000 people, which Carl likes to joke about, I wondered if he would carry on. I know he wanted to check a Vegas fight off, it was the last tick in the box then he had a slight injury and other issues meant he couldn’t fight Julio Cesar Chavez Jnr. After that I felt he wouldn’t fight again. But there were no rash decisions, his 38th birthday was coming up – that was on July 2 – and he wanted go out in his own way and on top. I think he was tempted by a match against someone like Gennady Golovkin or possibly Andre Ward again – things were talked about – not so much James DeGale as he felt he’d already done the big domestic rivalry with Groves; Golovkin was possibly the only one that lit his fire. Every week when nothing was happening, mentally he was moving away from it,” Smith said. “I found out recently that’s what he wanted to do and he was keen to come to our side of the ropes.”

READ OUR EXCLUSIVE INTERVIEW WITH FROCH HIMSELF HERE