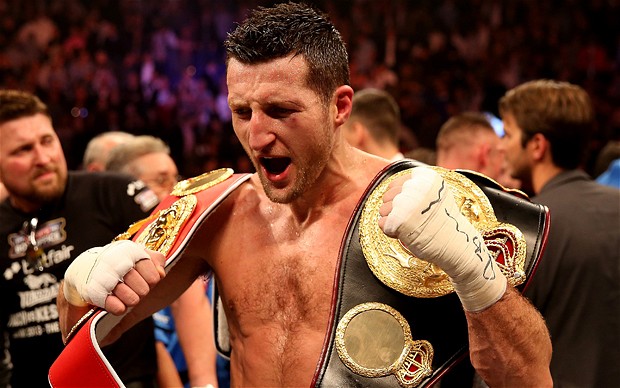 CARL FROCH believes he is at his peak, hitting harder and more accurately than at any point in his career. Five months have elapsed since one frightful right hand smeared George Groves all over the canvas at Wembley Stadium, and the memories still bring an audible smile to the super-middleweight. It remains the pinnacle of his career, and one he is wary of trying to top. He is keeping fit, evaluating his options, and enjoying the final months of an “amazing year.”

The IBF champion is currently being called out by another young domestic contender in James DeGale, but retirement would be favoured over that assignment. The names of Gennady Golovkin and, specifically, Julio Cesar Chavez Jnr carry more interest to the 37-year-old.

“My legacy is at stake,” Froch explained while gleefully cycling into a headwind. “You’ve got to give the fans what they want and from what I’m hearing, that’s not DeGale. It’s a massive risk in terms of whether anybody wants to see it. The problem is he hasn’t fought anybody. The hardcore boxing fan might want to see the fight but I’ve crossed over to the mainstream now.”

DeGale has accused Froch of ‘swerving’ him, and the outspoken pursuit brings back bad memories of Groves’ behaviour during their two-fight rivalry.

“The more I hear him talking rubbish and nonsense with his manager Ambrose Mendy, the more it puts me off,” Froch admitted. “Not only is not really a big fight, I’d also have to spend three-and-half months listening to another pair of plonkers. I deserve more respect than that.”

Froch’s name has been linked with Golovkin after the middleweight dished out his latest thrashing to Marco Antonio Rubio last week.

“You can’t be anything but impressed with him,” the Briton observed. “But he’s doing it against mediocre opposition. He looks great but you can’t judge him fully because he hasn’t been in with the elite. Also, he’s not yet Pay-Per-View and what I don’t want to do is talk about a middleweight, who’s smaller than me, and is not talking about me. The fight that does make sense is Chavez. He’s walking around two stone heavier than me and is 100 per cent Pay-Per-View, and would provide me with the motivation I need at this stage of my career.”

But Froch, a proud father of two, revealed that he will turn his back on the sport if the right fight does not present itself.

“If I don’t get the fight I want I will happily retire,” he said. “I’ve had a wonderful, glossy, fantastic career and I have nothing left to prove. I’ve not been given anything on a plate, I’ve had to fight every step of the way.”