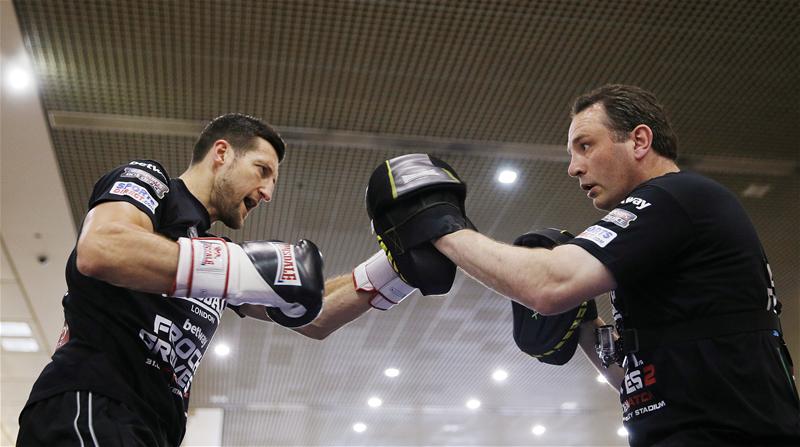 Froch is in the gym and Chavez Jnr is most likely next, writes John Dennen

CARL FROCH has begun training as a Las Vegas clash with Julio Cesar Chavez Jnr looms for later this year, possibly in March or April.

“He’s in the gym, we’ve been training hard. He’s been training this week. I’ve trained him [Thurday] and Friday as well,” said his coach, Rob McCracken. “It looks like Chavez possibly happening. Everyone’s kind of agreed on where it’s going but nothing’s signed so that’s the story. So hopefully that will be happening shortly but till it’s signed you just have to wait and see.

“That’s what’s motivating him at the minute, a big fight in Las Vegas.”

Froch is getting ready. “He’s done his two weeks ticking over, getting back into it,” McCracken said of his training. “Then he’ll have five days with me Monday to Friday [next week]. So we do four days the first week in week 12, then we do five days week 11. He’s already punching well. He’s a lot sharper than I thought he’d be. It’s weird, he’s already clicking back into gear. He’s really reacting and throwing some good combinations. The good news is he’s in the gym, he’s training, he’s looking forward to fighting and the Chavez fight it looks like the most obvious next one. At the same time, if it doesn’t materialize then, he wants to fight so it could be anybody.”

Froch is bringing his glittering career to an end. His trainer doesn’t expect the 37-year-old to fight too many more times. “One, maximum two more, one more fight or maximum two more fights and that will be all he’ll be doing. We take it step by step as we always have done. We’ve always done the same thing, we see how he’s training and how he’s feeling. He wants to fight and if he fights Chavez hopefully in the spring, around March, April time or if that doesn’t materialize he’ll fight in the summer,” Rob said.

“Carl’s been at the top for a long, long time, seven years of back-to-back epics and world class fighters is remarkable. The Chavez thing really interests him and really motivates him and excites him and that’s natural. He’s just fought a British fighter, he’s just come out of a year long training camp for George Groves, he’s boxed him two times. James DeGale’s become his mandatory so we’ll see where we go but right now today it’s Chavez that looks like the obvious next opponent.

“We won’t be pressured or forced to do anything that doesn’t suit Carl Froch. It’s about Carl Froch. Lots of fighters want to fight Carl Froch because you’ll get a huge payday and you can’t lose because if he beats you, you’ve lost to Carl Froch. So I’d want to fight Carl froch if I was a boxer today because it’s huge money and a huge event and if you lose you’re a winner anyway. That’s natural, that’s obvious and DeGale’s looked good. He’s looked good lately in his last couple of fights but of course he’s never fought anywhere near the level of somebody like Carl Froch. So it’s something we’ll look at and then ultimately Carl will decide because it’s what he wants to do and what he’s motivated to do. Will he get motivated to train for 12 weeks to fight James DeGale? Possibly, I don’t know, but possibly. But it’s up to him ultimately. I’m not going to persuade him either way. We’ll look at the options available like we always do and then we’ll decide what’s best for him and what he wants to do and what interests him. When you’ve achieved what he’s achieved in the sport and you’ve just done two mandatories on the spin then he can do what he wants.

“It’s not about avoiding anybody because Carl Froch fights everybody, there’s no issue with that. Right now the most appealing is a huge fight with Chavez in Vegas.”

*For training information and workouts from some of the biggest names in combat sport, including Carl Froch, don’t miss the Fighting Fit: Train like the Stars special*