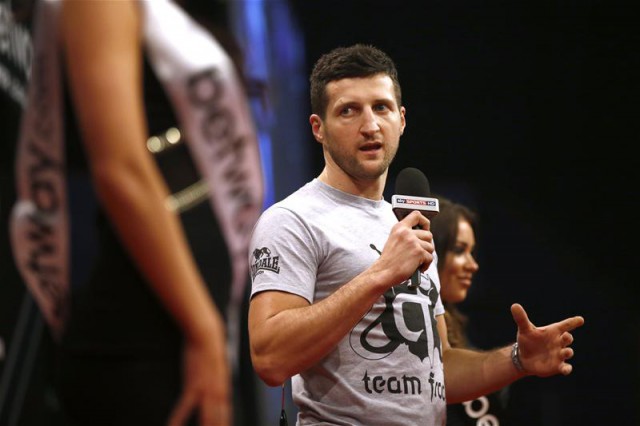 'The Cobra', Carl Froch responds to YOUR queries
WERE you nervous when you were asking Floyd Mayweather that now-infamous question in Las Vegas, regarding your rematch win over George Groves?
Dave Ashley, Facebook
No, I wasn’t nervous because it was all pre-scripted as a part of my dry sense of humour. I had already planned it. [Head of Sky Sports Boxing] Adam Smith told me I was going to get a chance to interview Floyd Mayweather and I thought, ‘I’m only going to get one question, what shall I ask him?’ I told Eddie Hearn before I did it, ‘Listen to what I’m going to ask Floyd Mayweather.’ When I asked him, he must have thought, ‘What the f*** have you asked me there?’ He wasn’t listening to me anyway, he knows who I am but he’s not bothered, he was about to fight in the biggest fight in the history of world boxing, he’s not interested in what I ask him, so I thought I might as well have a little tongue-in-cheek dig here. I enjoyed it and I’m still enjoying it. When I get my MBE off the Queen, I might ask her, does she know I knocked out George Groves in front of 80,000 fans at Wembley?
What are the chances of a fight with Gennady Golovkin happening?
@GlennSpeers, Twitter
Fifty-fifty. It would be more but I’ve heard recently that he’s considering dropping down, and he also mentioned me potentially moving down to 164lbs, which just isn’t an option.

For the rest of this exclusive interview, plus much, much more, buy the latest Boxing News: