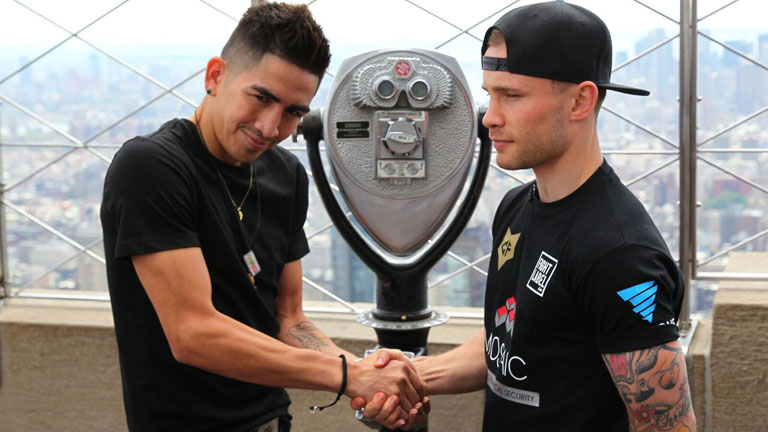 IN today’s social media-obsessed world, a single emoticon can sometimes say everything.

In the case of featherweight Carl Frampton, a Sunday morning wave emoticon directed the way of Leo Santa Cruz, his former rival with whom he splits two fights, was a simple don’t-forget-me plea. Done politely, too. The Irishman even said “hello”.

For context, Santa Cruz had just defeated Mares, doing so for the second time, and Frampton, taking to Twitter, felt the moment was right to remind Santa Cruz the pair had some unfinished business.

“It’s the fight I want more than any other,” Frampton told Boxing News. “It’s one each at the moment and it makes sense for us to have a third one.

“But I feel like I’m the only one talking about it all the time, almost to the point where I look like I’m being a bit desperate. But it’s not that. I just want to settle the score and see who the best man is.

“I think he should feel the same way as me. But it seems I’m the only one being vocal about it at the minute.”

Frampton, 25-1 (14), admits he hasn’t yet watched the fight but will soon get around to fixing that. It’s then, of course, he will be reminded of the time he beat Santa Cruz in Brooklyn in July 2016, and, regrettably, of the time he was on the wrong end of a redemption story six months later.

“They were two good fights,” Frampton, a two-weight world champion, recalled. “You’re not talking about it two stinkers. It should happen again and it can happen again. We’ll see.”

Frampton’s interest in a Santa Cruz rubber match will, for now, remain at a single emoticon level. It’s wise, too, given the fact his next fight is scheduled for August 18 at Windsor Park, Belfast, and his next opponent, he said, will be announced on Monday.

Rest assured, it won’t be Leo Santa Cruz. Nor will it be Josh Warrington, the new IBF world featherweight champion, although Frampton concedes a fight with the Leeds man is more likely to happen this year than one against his elusive Mexican rival.

“It will probably be Josh Warrington first,” said the WBO interim featherweight champion. “If I can fight and beat Warrington, and take his title, that puts me in a stronger position to fight Santa Cruz again some time next year.

“I don’t want to take anything away from Warrington. His last performance against (Lee) Selby was very good. Like everyone else, I expected Selby to win the fight. But Selby was a shadow of his old self and the weight-making was clearly an issue for him. I think it just caught up on him. I knew there’d be a point where it would catch up on him and I think it has.

“I think a fight against Warrington would be a good fight for me. I think he’s made for me because he’s an aggressive, come-forward fighter who’s not really a puncher. That’s exactly what you want. I like people who come forward at me, because it gives me the opportunity to find openings for my shots, and when you don’t have to worry about being hurt, that’s even better.

If Frampton waves at Santa Cruz, he flicks an a-okay sign in the direction of Warrington. The boxing world, meanwhile, hungry for either fight, opt instead for praying hands and crossed fingers.

Only when the fights are made will they let loose the flames and bombs.