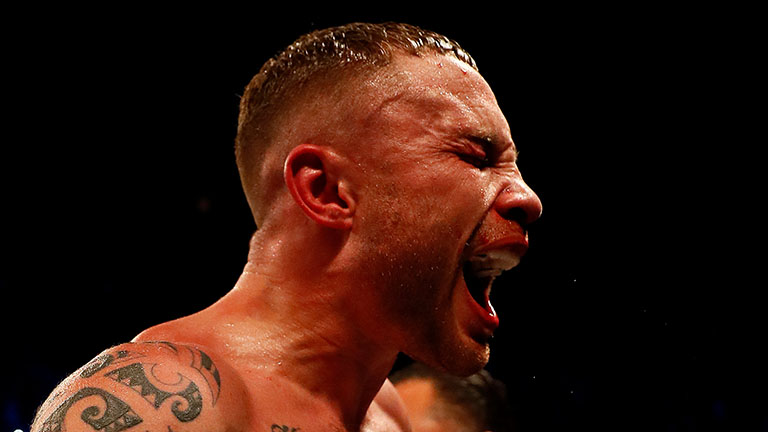 John Dennen watches Carl Frampton vs Nonito Donaire at the SSE Arena in Belfast. Here's how the evening unfolded

Carl Frampton is careful with Nonito Donaire in the first round. A solid left hook from Nonito sinks in the body and he opens up with that shot. Carl goes on the back foot but just before the end of the sessions heaves a big right fully into Donaire’s head.

Satisfied with what he’s seen in the first round, Frampton attacks. He traps Donaire in a corner, the right hand lashes in. Anxious Donaire left hooks furiously to try to get out. Frampton standing his ground and looking strong.

There are moments of fine counter punching from both. Frampton swayed back and landed a quality right-left combination. But he reached for the body with a jab, Donaire’s cross struck his head at once. Donaire tracks forward and Carl begins to marshal the charges.

Frampton shows the dimensions to his game. His right slams down and Carl burrows in close. He hammers hooks to the body, staying on the inside, forcing Donaire into the ropes. Nonito blazes back, repeating right crosses with venom.

Frampton grinds forward, forcing Donaire in the ropes. But Nonito uncorks a huge left hook, and backs it up with a right uppercut. Good connections from those hits, Donaire remains a threat.

A quieter session as Frampton resumes his work off the backfoot. He cracks in a lead left hook and the cross follows. Bruised under the left eye, Donaire still fires in a heavy jab.

Their heads knock together, Donaire complains to referee and without mercy Frampton pounces on him. Fighting furiously on the inside, Frampton back Nonito into his own corner. Carl uncorks vicious left hooks but has to swallow tremendous uppercuts from Donaire, even as he tucks his gloves close in together.

Jabs dictate the opening exchanges, but Frampton looks in general control. Before the close of the bout Donaire launches his right over the jab and lands an uppercut off the same hand. Frampton swings back.

Frampton plies Donaire with jabs, working well on the move. He picks moments to wide in, hitting Donaire with a vicious left hook to the body and a right hand to the head. Carl’s footwork is superior when he backs away, leaving Donaire jabbing from out of range and falling far short in this round.

Frampton is extracting the venom from Donaire’s work. Even as he moves back he peppers Nonito with a triple jab. Work with his lead left remains a constant in the session, reducing Donaire to only the occasional success as he lands a single right.

Frampton controls most of the round but just as it looks as though he’s in cool command, Donaire jolts him with a hard left hook and tears after him. He doesn’t capitalise on the damaging shot.

Donaire sets after him but can’t sustain the pressure. Frampton boxes defensively, rolling under punches, until, with a huge roar from the crowd behind him he barrels into Donaire, attacking the body cruelly with Donaire on the ropes. The bell rings though and they go the distance.

We go to the scorecards… All three judges score 117-111, all for Carl Frampton, now the WBO’s Interim featherweight champion.

After the decision is announced Donaire walks past press row, his eyes and upper lip swollen. He stops to tell us: “He was smart, he’s an amazing guy.” A gentleman to the end.

“There’s only one thing on my mind, Windsor Park,” Frampton declares.

The 11th round I was definitely hurt. I’m not going to deny it, you could probably see it. But I got through it. That’s what champions do.” Frampton pays tribute to trainer Jamie Moore and their gameplan, which Frampton executed marvellously.