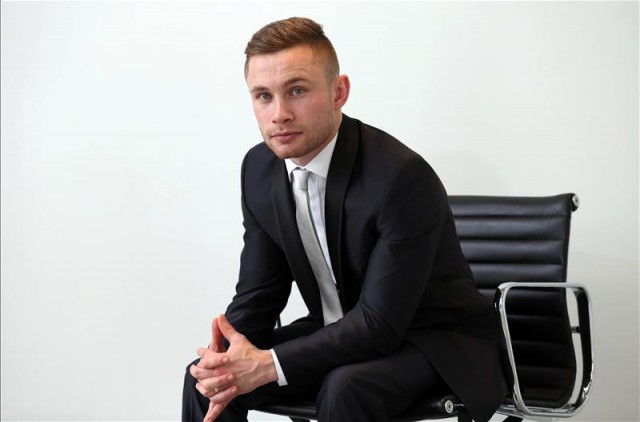 Frampton also talks about a potential move up in weight class

CARL FRAMPTON has questioned Scott Quigg’s world champion status ahead of their super-bantamweight unification fight at the Manchester Arena on February 27.

Quigg holds the WBA title, having been promoted from ‘regular’ champion in order for the fight with IBF champion Frampton to go ahead.

That came about after Guillermo Rigondeaux – the best super-bantamweight in the world – was stripped of the WBA title for inactivity and Frampton feels Quigg should be embarrassed by the situation.

“Well, Rigondeaux is the man you have to face if you wanna call yourself the main man.  So, whatever happens, happens, but I’m happy to face Rigo,” he said.

“I feel a little bit sorry for the position that Rigondeaux has been through.  I feel that Scott Quigg should be a little bit embarrassed in how he’s actually – you know, if we can say ‘won’ world titles.  I don’t know if he’s actually won them.  He’s been handed them a lot of time, and he’s been given them.

“So, I feel a bit a sorry for Rigondeaux, but I’m happy to fight anyone.  That’s why I don’t fear anyone.  I believe I’m the best super bantamweight in the world, but if you wanna prove that then you need to beat Rigondeaux.  I’m prepared to do that.”

Frampton also hinted at a possible move to featherweight although insists his weight is no problem for this fight with Quigg.

“We made a conscious effort for, you know, coming into this training camp.  We sat there as a team and the plan behind it, and it came from Shane really getting my weight down as soon as possible and hold it at a weight that I think that I fight best at.  So, my weight is pretty good at the minute.

“You know, we’re three and a half weeks away from the weigh-in, and my weight’s probably better than it normally is.  So, we’ve made an effort to do that because but I’m not growing anymore.  I’m not getting any bigger. I’m 29 the week before the fight. Obviously I want to move up at some point but that’ll be something that only me and my team will table about after the fight.”