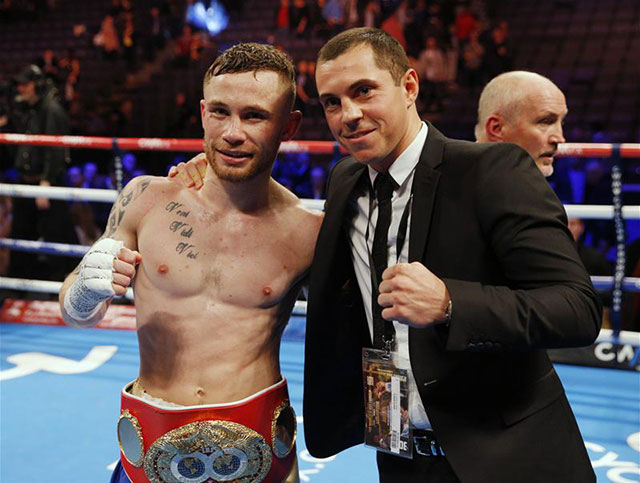 CARL FRAMPTON and Scott Quigg came face to face today for a press conference to announce their huge super-bantamweight unification fight on February 27.

The pair will meet at the Manchester Arena for Frampton’s IBF strap and Quigg’s WBA ‘super’ version, with the bout expected to be aired on pay-per-view in the UK.

While opinion seems to be split over who will prevail, Frampton insists he will improve on his points win over Alejandro Gonzalez in July during which he survived two first round knockdowns.

“This fight is only happening because of my last performance, because I was put over twice in the first round,” he said.

“It wasn’t a great performance from me. I can make this fight easy, Quigg’s a very good fighter but me at my best, I can make this easy. I can knock him out if I want but I think I’ll bamboozle him.”

The 20,000 capacity arena will be split in two, with each fighter being allocated half the venue each for their respective fans. However Frampton – wildly popular in his hometown of Belfast – feels he will have more support on the night, despite travelling to Manchester, which neighbours Quigg’s Bury locale.

“He’s not a massive ticket-seller, obviously this is a massive fight so he’s likely to sell a few more for this one but I’ll have more fans there. I don’t know what it’s going to be like for him, standing on the ramp as the home fighter and getting booed, or getting a worse reception than me.”

Quigg agreed with his adversary in that their much-anticipated clash was finalised because of Frampton’s last performance, though he feels the decision came from Carl’s team because of the scare Gonzalez gave them.

“This fight is definitely happening because of Carl’s last fight. He managed to get through the fight, but he needed to make the fight with me while he was still unbeaten so that’s why it’s happening,” he claimed.

“This is the fight I’ve wanted. There was no better feeling than signing on the dotted line, it’s a fight I’m looking forward to, it’s a fight I one million per cent feel I can win. These are the fights I’m in boxing for.

The press conference became more heated as the pair argued over who is the legitimate champion in the fight, with Frampton dubbing Quigg a ‘manufactured champion’ after being elevated from ‘regular’ to ‘super’ champion by the WBA.