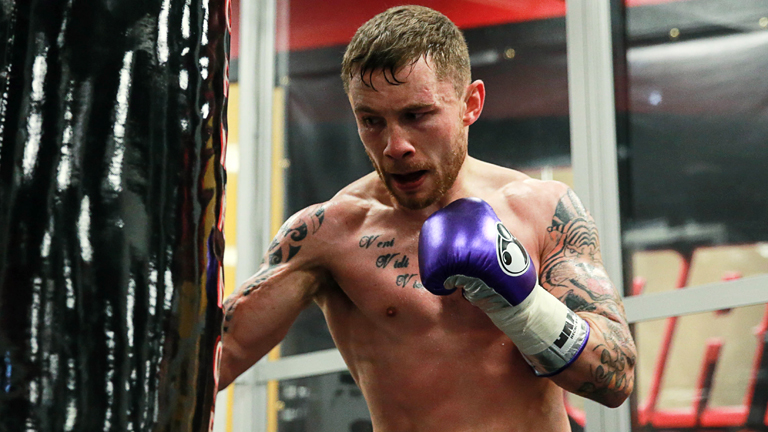 Carl Frampton is focus on Leo Santa Cruz, but has an idea of his future plans

CARL FRAMPTON wants to make yet more history and become the first Irish fighter to win world titles in three weight classes, should he defeat Leo Santa Cruz this weekend.

He defends the WBA featherweight title he won from Santa Cruz last year on Saturday night at the MGM Grand in Las Vegas.

Should he prevail, he wants to move up to super-featherweight at some point in the future – though he knows he cannot take his eye off the ball at the moment.

“People always ask about the future and what’s happening next. I don’t want people to think I’m looking past Santa Cruz because I’m not. But when the question is asked and I think about what I want to do, then I think about being a three-weight world champion. I’m with Steve Collins as the only Irish fighter to win world titles at two weights. I stand alone in Northern Ireland and a three-weight world champion, you’re talking about Hall of Fame stuff. People would remember that for a long time.”

At the moment, Vasyl Lomachenko reigns supreme at super-featherweight, having previously conquered the featherweight division. Frampton has enormous respect for the gifted Ukrainian, but if he were to move to 130lbs, that is the sort of name he would look to test himself against.

“Lomachenko? Why not? I think what you have to do, when you’re involved in fights, they need to be rewarding financially,” he continued.

“I’ve done this before and people have given me stick for talking about money, but when you have two young kids and a family, it’s important. A Lomachenko fight would be financially rewarded and it would be a great scalp if I could beat someone like him. This isn’t me calling Lomachenko out, a fighter I’m in awe of, but I don’t fear anyone.”

For now, his sole focus is Santa Cruz and though Frampton is the favourite this time round, he feels more pressure to perform after snatching the attention of the world last year.

Before any move up in weight, Frampton is also keen for unification fights, in particular against IBF champion Lee Selby, who defends his strap on the same bill this weekend.