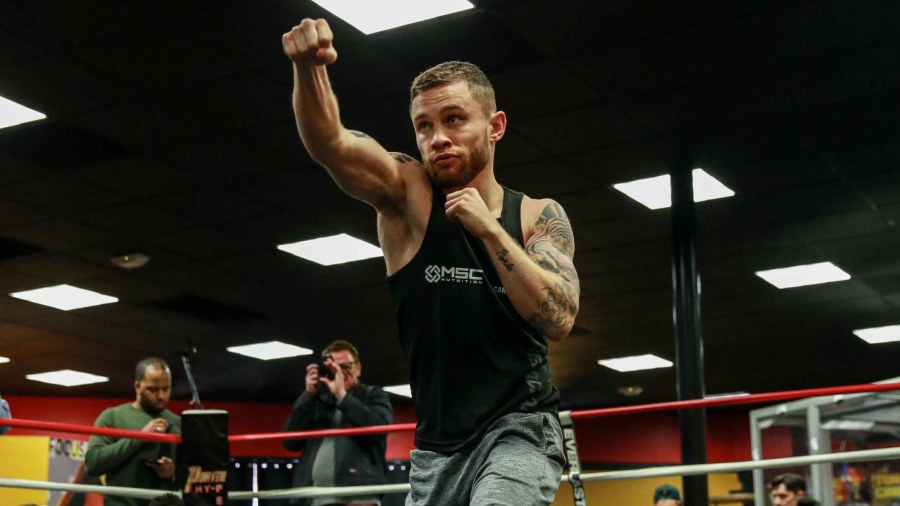 'I don’t feel any signs of slowing up,' warns Carl Frampton

CARL FRAMPTON has been explaining how his preparations have gone for his January 28 rematch with Leo Santa Cruz. “This camp has been even better than the last one. I had a few problems with my hand during the last training camp but this camp has been brilliant. I’ve been able to put a lot of effort into every session,” Frampton, the WBA featherweight champion, said. “I’m hungry to prove that this wasn’t a fluke. I see some people talking on the internet that I got lucky last time or that Leo would have won with his father in camp the whole time. But I believe there is a lot more to come for me. I’ve been performing better this camp than ever before. I think I win this fight more convincingly.

“I think Leo is a confidence fighter. I think his pride has made him go straight back to the deep end again. He’s always been bigger than his opponents. At both bantamweight and super bantamweight he was bigger. Even though Leo is taller than me, I’m the bigger man. On fight night I’ll be heavier and stronger than him. He’s been able to bully opponents and wear them out, but he can’t do that to me. I think he’s making a big mistake jumping right back in.

If Frampton secures a second victory over Santa Cruz, he is eyeing a unification showdown with Lee Selby. “I got drawn in to Leo’s type of fight last time, which made it very exciting. Because of our styles, it’s always going to be a good fight. If it’s two wins to nil for me, I’d rather move on and fight someone like Lee Selby. I just want to be involved in big fights,” he said.

But he is relishing this contest as a major event. “Obviously, being from where I’m from, fighting in New York was a major appeal, and a lot of guys on the East Coast are attracted to an Irish fighter they haven’t seen before. So I got a lot of new support from the East Coast. We brought a lot of people across with us, as well. But now, to be fighting, topping the bill at the MGM in the fight capital of the world, it’s something I never really thought about when I was a kid or when I turned professional. I never really believed I could get to this. But it’s here, and I’m hoping that it can continue for a long time,” he said. “We’re staying at Robert Guerrero’s training camp house, which is a big thing for me in itself. We drove past the MGM Grand and saw my face on the side. That was pretty surreal in itself. I just can’t wait to soak it up.”

“Fighting Leo Santa Cruz in the United States, a three-weight world champion who a lot of people thought was going to beat me and beat me comfortably, that was a big deal. That was the real turning point of my career. And I think there’s more to come. I’m 30 in February, but I don’t feel any signs of slowing up.”