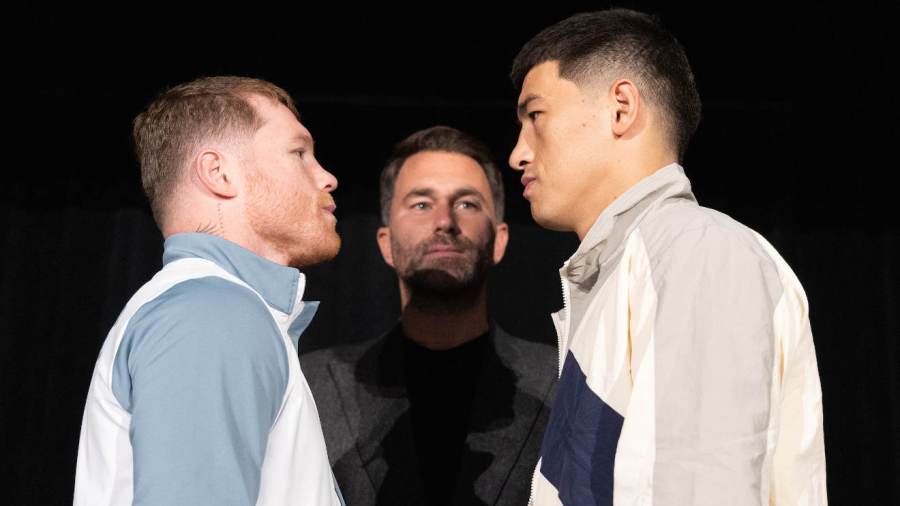 In recent years, Álvarez has turned into an invincible man but next he meets his toughest opponent in several years. Matt Christie breaks down Canelo vs Bivol

AGE & EXPERIENCE
ÁLVAREZ, born on July 18, 1990, is exactly five months older than Bivol. It would be tempting to say that as well as being marginally younger, Bivol is also significantly fresher when one puts his 19 professional fights alongside his opponent’s 60. Yet it’s the adopted Russian – born in Kyrgyzstan to a Moldovan father and Korean mother – who has been boxing for longer. He started at the age of six and, after juggling several combat sports, he compiled a reported amateur record of 268-15 where he won junior World championships, a Youth bronze in 2008 and fought at a high level internationally, including in the hybrid World Series of Boxing.

When compared to Canelo’s record in the vest – supposedly 44-2 after starting at the ripe old age of 13 – Bivol can rightly claim to have superior schooling at grassroots level and, overall, has actually had more fights than his rival. But in the professional ranks, the most reliable barometer when analysing a professional contest, the experience of Álvarez leads the way by a considerable distance.

This will be Álvarez’s 37th scheduled 12-rounder compared to Bivol’s 12th, the opening bell will trigger the 437th round of the red-head’s professional career (to Bivol’s 149th) and this is the first time that the underdog has been in an event anything like the size of this. Needless to say big fights are, by now, second nature to Canelo.

RECENT FORM
SINCE November 2019, Canelo has gone 5-0 (4) against Sergey Kovalev, Callum Smith, Avni Yildirim, Billy Joe Saunders and Caleb Plant. Granted, not exactly a ‘murderers’ row’ but nonetheless a truly exceptional run of form that saw the Mexican win a belt at light-heavyweight before dropping down to 168 to completely clear out the top of the weight class inside 12 months. Furthermore, the men he beat to win gongs at super-middle were all unbeaten beforehand (Smith, Saunders and Plant).

In the same timeframe, Bivol posted 12-round points wins over Lenin Castillo, Craig Richards and Umar Salamov. All solid fighters but none deemed a threat to anyone close to the top of the light-heavyweight rankings. Bivol didn’t hugely impress in any of those outings, either. We have to go back a little further, to March 2019 – more than three years ago – for evidence of Bivol at his best. That was when he dominated the robust Joe Smith Jnr over 12 rounds, highlighting how good he can be. Even so, four of Canelo’s last five opponents – Kovalev, Smith, Saunders and Plant – might be favoured to outbox Smith, too.

Álvarez is jumping up in weight to a place he’s been before; Bivol, however, is taking an almighty leap into the kind of class he’s never once experienced.

SIZE, PHYSICAL EQUIPMENT & STYLE
AT 6ft, Bivol will enjoy a four-inch height advantage and just under two inches in reach. But this is nothing new to Canelo; one has to go back to his 2015 points win over Miguel Cotto for the last time he encountered an opponent he was taller than.

However, Bivol is a natural light-heavyweight, boxing in the weight class since he turned professional in 2014. This will be his 20th fight at 175lbs, compared to Canelo’s second. Not having had to gain or lose weight is an advantage; his camp will have been all about preparing for the Mexican superstar.

The 4/1 underdog is an excellent fighter, too. He does all the fundamentals very well, he’s intelligent and never hurried. Like Canelo, he likes to fight in a deliberate and methodical manner behind one of the best jabs in the sport. He can also throw lead hooks with aplomb and has a tidy straight right hand. Also like Canelo, he can burst into action and fire quick combinations from a standing start.
Canelo has developed into a patient and artful assassin. He may lose rounds here and there but it’s a long time since he misplaced his composure; he remains calm, assured and confident at all times. His feet and defensive skills are almost as supreme as his attacking prowess. Hard to fault in any way but, when it comes to the 175lbs class, Bivol is the more established.

WHAT BIVOL MUST DO TO WIN
TO HAVE any chance whatsoever against Canelo, the jab has to be on point, it has to be regular and there can be no fear when it comes to following up; to beat Canelo he will need to boss from centre ring and be brave enough to throw more than just ones and twos while varying his output to head and body. Bivol is capable of doing exactly that if – and it’s a big if – he turns up at his very best.

Álvarez opponents often fall under the Mexican’s spell and fight at his pace, so Bivol – who also rarely over exerts himself unless there is good reason to – may actually find the tempo of the early going to his liking. Unflustered and confident, it’s likely he will use his height and reach advantages more effectively than recent Canelo opponents and win rounds. The more he can win, or even just nick, the more likely it is that Canelo will be forced to take the kind of chances he’s not had to take for a while.

WHAT CANELO MUST DO TO WIN
CANELO has been here so many times before. What he may find with Bivol, however, is a fighter he struggles to break down mentally.
Álvarez may find opportunities to counter limited so expect him to initiate exchanges himself by setting traps as he comes in. The body of Bivol should be targeted by Canelo’s searching hooks before he takes aim up top; Canelo’s right, which he can loop over an oncoming jab or craft into a conventional hook, might be his most effective weapon in this contest.

Although Canelo has had success in the past by draining energy from his opponents, he’ll need to work hard to retain control. The pace, if slow and measured, will suit the favourite. Unhurried, he will likely up his output as the fight progresses.

OUTCOME
THE uninitiated may presume this is just another day at the office for the best fighter in the sport, that simply because his name is Canelo Álvarez he wins this fight. But this might be one of the hardest fights of his career and an upset would not be a massive surprise.

Bivol’s speed and supreme ringcraft make this a difficult night for Canelo. It’s unlikely that, mentally, he will be overawed in any way.

We expect a nip and tuck affair, particularly through the first six rounds. Ultimately, though, Canelo appears the more versatile and his experience at the highest of levels could be the difference in the second half. However, Bivol exceeding expectations may lead to some screaming robbery when Alvarez’s hands are raised after 12 absorbing and tactical sessions.

The Undercard
ZILHEI ZHANG is 6ft 6ins, he’s a southpaw and he’s unbeaten in 24 fights. He’s also one of the most overrated heavyweights of the current era who has been protected throughout his career, largely because there’s chance to do some big business in China where heavyweight boxers are rare.
Filip Hrgović would have been a certainty to beat Zhilhei but the Croatian, whose father died in April, withdrew from the contest due to a difficult training camp. As we went to press, Zhang was waiting on a new opponent.

There’s some good matchmaking further down the card, with some glossy records either set to be strengthened or exposed.

Southpaw Montana Love, 17-0-1 (9) and from Cleveland, Ohio, should win his super-lightweight 12-rounder against fringe contender, Gabriel Valenzuela, 25-2-1 (15). Yet the Mexican, who beat Robbie Davies Jnr in February last year, looks likely to last the course.