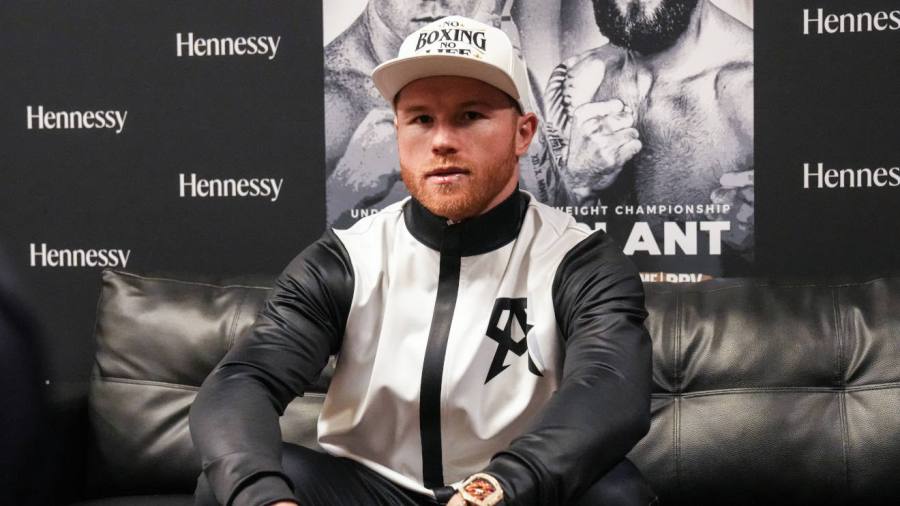 The magic of boxing was in every nook and cranny of Las Vegas during the Canelo Fight Week, writes Steve Bunce

ISMAEL SALAS has a boxing academy in one of the hundreds of anonymous little shopping strips in one of the hundreds of anonymous Las Vegas districts. Salas is a tidy man, compact, powerful, smiling and on the day I visited, he was walking and talking on six-inch wedges. “He has a much bigger pair,” Joe Joyce told me. “I don’t know how he stands up.” Not only does he stand, but he moves – even in the weighty boots – like a tiny, muscular ballet dancer. Perfect balance at all times.

Joyce, or “Joey” as Salas tenderly calls him, was spending an hour moving under ropes stretched across the ring. Salas at his side, whispering, joking and demonstrating. Feint, move, glide under, let a shot go, move, feint, shot. It was heavy, technical and precise work for Joyce, who was fresh from the plane. Joyce’s concentration was total.

“Slip, slip, dip, slip it, back,” said Salas. “Go underneath and you slip inside. Give me a little kick with this one. Beautiful, Joey.” Salas is about balance, poise, style. He moved with Joyce, just a fraction of an inch in front of him, lost inside Joyce’s bulk. It was wonderful choreography. He is a Cuban, make no mistake.

Outside in the sun with the smell from the Korean kitchen gently scenting the hot air, Joyce went over the session. “It’s not deep training now,” he said. “It’s the fundamentals. I’m working on mobility. I’m working on being smart.” I left Joey that day, fully reminded of the sacrifices a fighter has to make to make it. The cost of a mobile camp is the easy part; loneliness and the not knowing is what gets to a fighter. A fighting man can be lonely in a crowd and in Las Vegas the crowds are lonely places.

All week I marched with the Caleb Plant and Saúl Álvarez entourages, the track-suited essentials. The teams swelled as the bell approached. Partners, kids, parents, aunts, fixers, lawyers, priests, Hells Angels, friends, shadow-agents and publicists. Both teams had high levels of access for me; I was stunned when I got a long and exclusive sit-down with each on the Tuesday. Jane for Canelo and Mario for Plant delivered their fighters to dressing room four at the Grand Garden. I honestly expected a blank. At best, three-snatched minutes in a filthy huddle. Instead, we squeezed 30 people in behind the cameras and the two men, deep in fight week, shared their stories for 20 minutes. Laughter, legacy, emotion, stares, truth – it was a delight. Plant was complex, Canelo quick to remind me that he started with nothing. What a pleasure.

A lot of British boxers could learn from that type of professional behaviour.

There was a small gathering on the balcony to watch Mikaela Mayer fight on Friday night. It was an elite gang: Dan Rafael, John Dennen and Donald McRae. That’s it. The Virgin property is an oasis in Las Vegas, the venue intimate. “It’s a posh York Hall – I really like it,” offered Ant Leaver, Matchroom’s American media man. In all fairness, six seats in a bus shelter is a posh York Hall. He was there on Maiva Hamadouche duty. The fight was savage, relentless and deserved a much bigger audience. It’s always odd when a boxing event in Las Vegas slides under the radar, a shadow victim to a bigger fight elsewhere under the lights.

A lot of people had a lot of money on Hamadouche for a stoppage; Mayer is polite, articulate and the fight proved her resilience. She is not the first female boxer to operate under the assumption that she will fold under pressure. She will not.

Bob Arum was in place before the first fight on the Virgin night and only moved at the end. “That’s a real promoter,” somebody on the balcony said. When I left, perhaps 30 minutes later, Arum was surrounded by cameras and I heard him say: “[Angelo] Dundee knew that [George] Chuvalo was a tough man.” You don’t get that pedigree of casual chat at York Hall, my son.

Dozens of times in the past 30 years I have branded some travelling American trainers as comedians. They were not funny, just bad. Their knowledge poor, their corner work abysmal and their availability seems to have been the reason they were hired. Well, Jake Paul has now turned my observations upside down by showing up for his press conference on fight day with a real comedian in his camp. Not everybody found Coach D funny, but he made me chuckle with his nonsense. I particularly liked this gem when asked what the strategy was for beating Tommy Fury.

“I will tell this white boy,” he said pointing at Paul. “Start putting the seven on his chest and stay on the phone, baby.” The pair then demonstrated putting the seven on the chest and staying on the phone. Hey, it made me smile. “Tommy has Sugar and I have Coach D,” Paul explained. SugarHill Steward laughed at that. Less than eight hours later, Plant walked to the ring.

There was a perfect line from the classy Jimmy Lennon Jnr at one of the events. Standing tall, slim and cool, he set the scene: “You can see it, feel it, smell it, taste it – fight week is here.” Classy Jim was right.

Mayer, Coach D, Salas, Leaver, Arum, Joey, Lennon Jnr, Plant and Canelo all had a role in the city of fights in one of boxing’s pound-for-pound finest weeks.