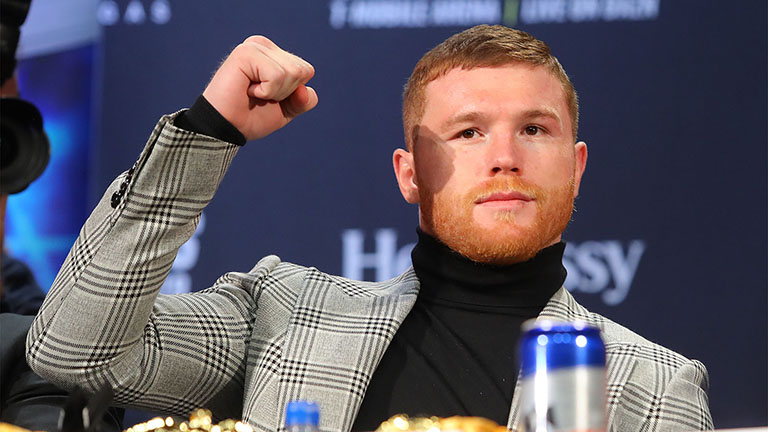 A third fight between Saul “Canelo” Alvarez and Gennady Golovkin might well be the most appealing option for boxing fans. But if so Canelo is going to make the Kazakh work for it. His team feel like there is no unfinished business with “GGG” and, while Alvarez didn’t rule out pursuing their rivalry, he set a significant condition. If Golovkin has a world title, Canelo will fight him.

Given that Alvarez holds the WBA and WBC middleweight crowns and the winner of his May 4 clash with Danny Jacobs will add the IBF title to that haul, which means Golovkin would need to fight and beat the WBO belt-holder Demetrius Andrade.

“The objective this year is to win all the titles. My goal this year is to have all the belts,” Alvarez explained. “If Golovkin has a belt before the end of the year, then yes, we’ll gladly fight him. If he doesn’t, see where it falls later, how it plays out.”

But he added, “Right now my objective is May 4. That’s where my focus is. If a third fight happens, it’ll be better than the first two. Right now my concentration and focus is on May 4.”

Given that all the key middleweights are aligned to the same broadcaster, streaming service DAZN, a major obstacle is removed for producing an undisputed champion at 160lbs.

But Canelo knows that he is the kingpin of the division. “Now more than ever everybody wants to fight me, to beat me. Obviously that’s biggest thing for them. They want to come and beat me,” the Mexican said. “We’re always exposed to that. In boxing anything can happen. That’s why today I train harder than ever, so that it doesn’t happen and we continue with victories and continue winning.”

Alvarez clearly respects Jacobs as a worthy foe. In fact he thinks the American deserved to win the fight he had Golovkin in 2017. “I mean, the fight was close. Could have been to anyone,” he said. “For me Jacobs won the fight.”

“He’s an opponent that is very complete. He knows how to obviously change guards from southpaw to orthodox. He knows how to move in the ring. Very difficult,” Canelo continued. “We know the risk of this fight and it is a high-risk fight. A fighter of my experience, of my level, has to adapt and know how to adapt to all the levels. That’s what we’re preparing for. We’re working very hard to prepare and come out with the victory.

“I believe Jacobs has a unique style because he’s a very complete fighter. He can box, punch, he’s tall, agile.”

But he cautioned, “No matter what’s in front of me, I can adapt and overcome.”

And, Canelo said, “We have a tough, difficult fight ahead of us. As a team, we have a goal. The objective of this year is to win all the belts. If Golovkin has a belt, then yes, why not? We’ve given the fans two beautiful, great fights. Why not a third?”