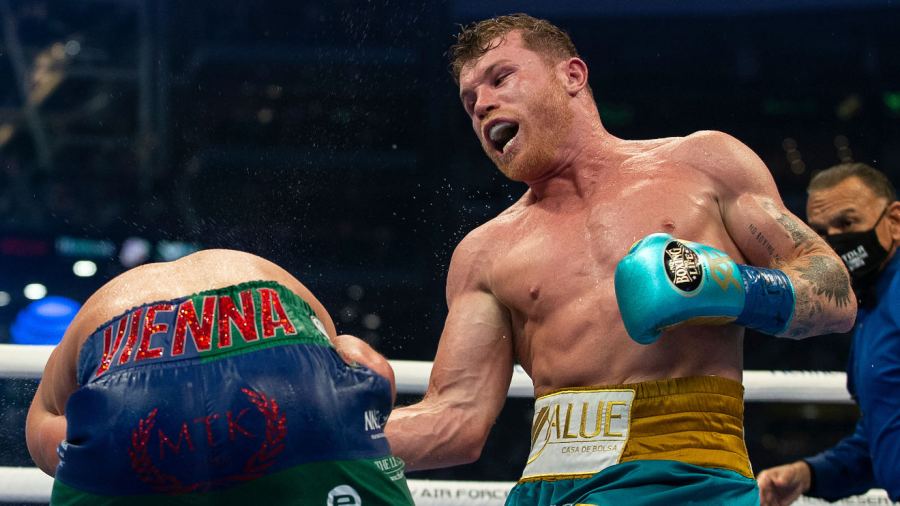 Canelo Alvarez looks to become the undisputed champion next, and ejects an agitated Demetrius Andrade from his post-fight press conference

NO ONE had a better view of the damage Billy Joe Saunders took on Saturday night than Canelo Alvarez. The Mexican realised at once that the Briton would not be able to fight on past their eighth round at the AT&T Stadium in Arlington, Texas.

“It’s hard because I saw when he broke his cheekbone and I went back to the corner and I told Eddy [Reynoso, his trainer] that I didn’t think he could continue. When you break your cheekbone you can risk your life and you can’t continue that way,” Alvarez said. “I knew what I did with that punch.”

The build up to the fight had been fractious, with the camps quarrelling over the size of the ring. Alvarez settled all doubts by allowing Billy Joe the 22 foot ring he’d requested and by scoring the stoppage that Canelo himself had predicted. With the win Alvarez added the WBO belt to the WBC and WBA super-middleweight titles he already held.

“In the end the facts speak louder than words. I’ve been in big fights, I just had to stay focused, do my job,” Canelo reflected. “I love boxing and this is what I love to do.”

“Not much [further] to say, he’s a great fighter,” Alvarez added. “I’m glad he took the fight and we’re going to continue to make history.

“Right now I’m really happy with what we have achieved and now I’m going to celebrate with my family. You already know what I want, hopefully we can get that fight going so I can unify the titles.”

It is a good day then to be Caleb Plant. The American holds the IBF belt, the last super-middleweight title the Mexican superstar needs to add to his collection. That is the fight Alvarez wants next. If Plant is amenable, the negotiations ought not to be overly complex. Alvarez is a free agent and can choose the broadcaster for his next fight. The FOX network and streaming service DAZN are both expected to make “huge” bids for it.

“He’s free to make the fights he wants to make where he wants those fights to happen. So for me I think it’s a very straightforward process and I think that process should start immediately and I don’t see any complications with his position,” Eddie Hearn said.

One person whom Canelo won’t be fighting next is Demetrius Andrade. That didn’t stop the American from gatecrashing Alvarez’s post-fight press conference to try to talk up a fight for himself. Andrade is an alphabet champion; he holds the WBO’s middleweight belt but hasn’t fought anyone close to being regarded as the number one in the division.

Canelo shook his head at Andrade’s intervention and laughed. “You fight with nobody,” he said. “Get the f**k out of here.”

Watch the replay on DAZN. Available for only £1.99 in the UK

Security had to expel an agitated Andrade from the press conference.

Alvarez is determined to become Mexico’s first undisputed champion in the four-belt era. This latest unification triumph was a spectacular occasion in front of 73,000 supporters, an indoor record for boxing in the US.

“I’m going to continue to make history and represent my country.”