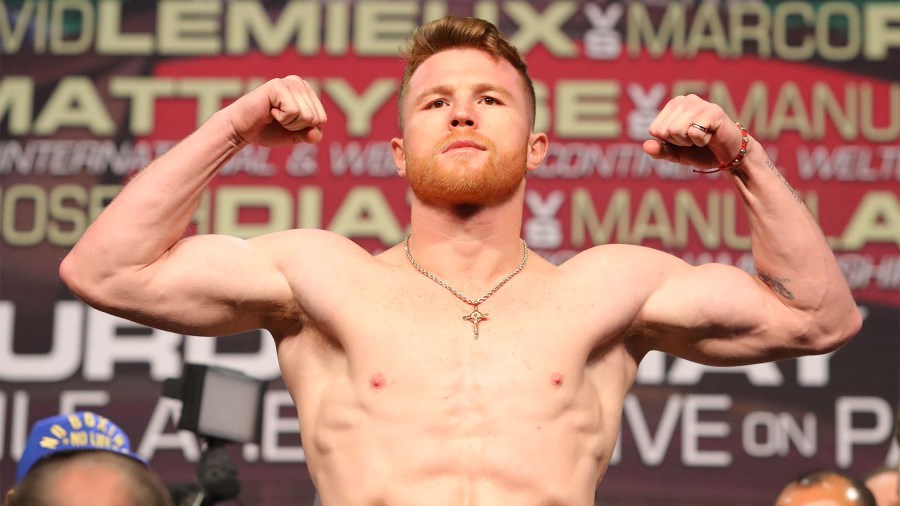 EXCITEMENT is mounting in Las Vegas ahead of Saturday’s Mexican grudge match, Canelo Alvarez vs Julio Cesar Chavez Jr at the T-Mobile Arena. The weigh-in today took place at MGM Garden Arena but the crowds gathered early, filling the lobby outside the doors this morning. The chants were increasingly loud by 10.30am and the doors didn’t open until 1pm (with the weigh-in to start at 2pm). At first glance there were plenty of Canelo headbands being worn, the odd sombrero but an increasingly vocal contingent of Chavez supporters.

This weigh-in is a crucial moment ahead of the fight. Both competitors have spoken of the personal importance of this battle to each of them. Canelo has come up the hard way, turning pro at only 15, just a child really, to make his way from poverty to becoming one of the biggest draws in the sport. To him Chavez Jr has been able to trade on his father’s name and get away with lax discipline yet still be granted chance after chance. This fight though offers Junior a chance at redemption, an opportunity to prove himself worthy of the name. A spoiled prince perhaps, but now he can challenge the new Mexican king for the throne.

But the weight will be key. The target for both was a catchweight of 164½lbs, presumably selected by Canelo’s team to be just high enough for Chavez Jr to agree to it but still low enough to drain Junior as he struggles to reach his lowest weight since 2012. Chavez Jr has fought as high as light-heavyweight, where he lost, and has notoriously failed on the scales in the past as well.

There was though a real, financial incentive for him to make weight this time, with a reported $1 million fine to be levied for every pound above the catchweight.

That did the trick. Chavez has been looking gaunt but came in at 164lbs. There was little doubt that Canelo would make weight. He has been operating successfully at 154 and 155lbs and now scaled a career highest of 164lbs.

But it’s one thing being a massive super-welterweight, it’s another matter bulking up. It leaves open the question as to whether Alvarez’s advantages will translate well to the move up in weight. He is powerful and strong but will he be as powerful, as strong and as effective at over 160lbs? Will the extra size affect him too? He has to shift that additional mass around with him during the fight and that could affect his stamina in second half of the contest.

Chavez is markedly taller than Canelo. If he can replenish himself sufficiently, this could also be a factor. While Junior tends not to fight at range, if Alvarez can’t drive him back, Chavez could push in close and bore down on Canelo with that extra size, leaning down on him, to try to bully and tire Alvarez.

The next phase of the build up, the recovery between Friday afternoon and tomorrow evening, as well as the fighters’ respective weights on fight night, will be the next crucial step.