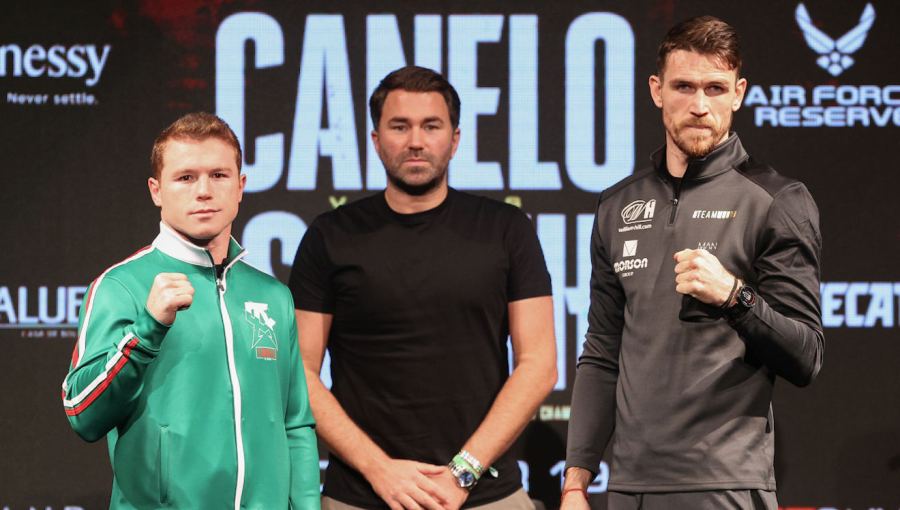 Will Callum Smith be a tall order for Canelo Alvarez? John Dennen analyses how Alvarez and Smith stack up

Alvarez: Canelo is 30 years old and has never looked stronger. Once upon a time he was a welterweight. He won his first world title at a catchweight below the super-welter limit in 2011. He was monstrously strong at 154lbs and is a natural middleweight. Yet in November of last year he was fighting up at light-heavy and stopping no less a foe than world champion Sergey Kovalev. The only question mark is what kind of a toll moving up in weight and back down to super-middle will have on his body. He has though yo-yo-ed up and down in weight before and seemingly thrived through it.

Smith: The Liverpudlian is almost the same age as Canelo, just four months his rival’s senior. He’s not only a very good super-middleweight, he’s a big super-middleweight too. At six-foot-three to Canelo’s five-foot-eight, Smith is much the taller man with the reach advantage, recorded at 78 inches to Alvarez’s 70-and-a-half. Believe it or not Smith was once a gigantic welterweight too. He boiled his frame down to 69kgs when he was starting out his career as an international amateur in 2010. Given his size an eventual move up to light-heavyweight beckons for Smith sooner or later.

Edge: Smith’s advantage here, notably in height and reach, will become apparent as soon as they go head to head.

Alvarez: This will be Canelo’s 57th prizefight, an astonishing record for someone who is still young. But that’s because Alvarez started out as a pro when he was a 15-year-old boy. In that extensive career he’s fought 402 professional rounds and 15 world title fights. The level of his opposition has been phenomenal too: Floyd Mayweather in 2013, Miguel Cotto in 2015, Gennady Golovkin twice and Sergey Kovalev last year. As well as facing the elite, he’s also boxed Ryan Rhodes, Shane Mosley, Erislandy Lara, Danny Jacobs, Amir Khan, Liam (brother of Callum) Smith and many more. When it comes to boxing, at this point in his life there is little Canelo hasn’t seen.

Smith: The Briton, 27-0, is a seasoned pro. He won the English, British and European super-middleweight titles all by first-round knockout. That is a marker of Smith’s calibre. It was the World Boxing Super Series that was the vehicle for bringing Smith to the fore and to the top of the super-middleweight division. Over the course of winning that competition, he beat Erik Skoglund and took the WBA title and the Muhammad Ali trophy against George Groves in the final. He has been in the ring with quality fighters like Carl Froch and Tony Bellew in sparring and as an amateur, boxing Dimitri Bivol, now a light-heavyweight world champion, and brilliant Kazakh Serik Sapiyev in a vest and headguard.

Edge: Canelo has a remarkable résumé having boxed the best of this era.

Alvarez: Defeating Miguel Cotto for the WBC middleweight title was an outstanding win. Toppling Sergey Kovalev at light-heavyweight was very good too. Kovalev though had shown against Andre Ward that he could be hurt and Canelo’s team well calculated the timing of that fight. The Mexican’s finest performance probably came in his rematch with Gennady Golovkin. That didn’t entirely lay to rest the controversy of their first fight. The build up to it was marred by Canelo’s suspension for the consumption of tainted beef and the rematch itself was close. But Alvarez showed how he had developed since the first fight, he’d learned from his mistakes, withstood Golovkin’s huge punches and at times his boxing was sensational.

Smith: The WBA champion has an outstanding victory in his title winning performance against George Groves in the WBSS final. Groves had battled back from a career threatening shoulder injury against Chris Eubank Jnr in his previous bout but nevertheless Smith was in excellent form. He measured out Groves, hurt him, but was patient too as he set up his final assault. The left hook that stunned Groves and the following salvo was savage.

Edge: Smith’s key win over Groves was significant and decisive, but in eventually edging Golovkin, Canelo was victorious in the best fight that could be made in the sport.

Alvarez: It’s hard to hold a draw with Jorge Juarez when he was still just a15 year old boy against Alvarez. Although many thought his draw with Golovkin was a fight Canelo deserved to lose, the contest itself was a thrilling collision, regardless of how the judges actually scored it. It was against Floyd Mayweather, the best he’s ever fought, that Alvarez looked at his most flatflooted, at times his most forlorn and for once, strangely out of ideas.

Smith: Smith attracted the most criticism for his most recent performance, a hard fought battle with John Ryder. But looking past the past losses on John’s record to Rocky Fielding and Jack Arnfield, Ryder is still a good fighter who was in fine form at super-middleweight. Smith was at his most underwhelming when tamely outpointing Nieky Holzken, a Dutch martial artist whose primary career is as a successful kickboxer.

Edge: Canelo’s loss was to the best of his era and Alvarez clearly learned from the experience.

Alvarez: Alvarez can adapt. He learned from the Mayweather defeat, and proved himself against a slick stylist Erislandy Lara shortly afterwards. He evolved between the first and second Golovkin fights. He is heavy-handed, hurtful with hooks and straight punches to the body and the head. He can work lovely combinations and excellent defensive movement of his own head and body allows him to stay close in and counter-punch effectively. His punch resistance is also impressive, without that he couldn’t be going 24 rounds with “GGG.”

Smith: Works well from range and his size is intimidating. Smith’s left hook has been a dangerous weapon and his right cross is hurtful too. His fundamentals are well schooled, his guard tight and he is tough too. He took shots from George Groves, an explosive puncher, and rode them well.

Edge: Canelo is the number one pound-for-pound for a reason.

Alvarez: His footwork can be slower than his fast hands, so he is more at ease with opponents who come to him rather than highly mobile opposition. He can find it hard, sometimes, to open up a boxer who is thoroughly defensive and can be guilty of fighting in sporadic bursts rather than boxing through the full three minutes of every round. He is a small super-middleweight which puts him at something of a disadvantage in this division.

Smith: With his height and his reach, Smith should be keeping his opponents stuck on the end of his long jab. But last time out Ryder showed an unexpected facility for slipping inside his jab, getting up, close and working there. While Ryder is a southpaw and therefore more awkward than orthodox fighters, Smith did not diffuse those tactics as effectively as he should have done. On occasion he has been caught off guard and outjabbed.

Edge: Canelo’s weaknesses are more readily identifiable but that’s because he has consistently fought at the highest level.

Boxing, in theory, can be simple. The taller man wants to position himself so he can land and his smaller opponent can’t. Far easier said than done. In Callum Smith’s case he’s got to pin down pound-for-pound the number one fighter in the world, the best of the best. If his jab is hesitant, if it’s slow or inaccurate, Canelo will pounce quickly and on the inside Smith’s long body will suddenly transform into an inviting target. Alvarez’s fight with Rocky Fielding was a showcase for just how devastating his body attacks could be against a bigger man.

That Smith stopped Fielding more quickly than Canelo managed doesn’t mean that he’s the better boxer but it is a reminder that the Liverpudlian also carries dangerous power.

He’ll have to try to clip Alvarez on the Mexican’s way in. But he can’t wait and hope for a one-punch KO. He needs to impose himself on the fight, set a furious pace and maintain an intelligent, long range bombardment.

Even that might not be enough. Canelo is not only resilient, his defence is excellent. Smith needs aggression to win rounds but that can leave him vulnerable to Alvarez’s high calibre counter-punching. Eventually Canelo is likely to work his way inside Smith’s long levers and attack effectively up close. The Briton might well to have to call on own his own reserves of toughness as the bout progresses. Canelo is likely to win an exciting fight, against the best in the 168lbs division, on points.