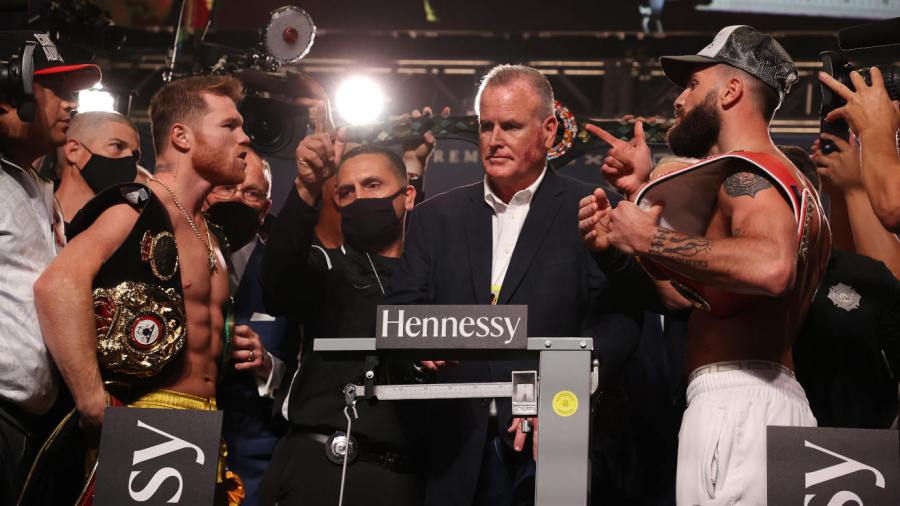 Matt Christie breaks down Canelo Alvarez vs Caleb Plant and believes that for any chance of the upset, Plant must somehow stay composed and switched on for all 12 rounds

AGE AND PHYSICAL EQUIPMENT
AT 31 years old, Canelo Álvarez is surely in the midst of his peak and showing no signs of slowing down. Quite the contrary, in fact. Since emerging from a close middleweight rematch with Gennady Golovkin in 2018 with his hand raised, the 5ft 8ins Canelo has won six bouts against predominantly solid opposition with four of those coming inside schedule. Looking at Canelo now, thick-set, muscle-bound and almost impossible to budge, it is difficult to believe that as recently as 2016 his then-promoter Oscar De La Hoya stated that Álvarez was a natural super-welterweight. Though he has been a pro for 16 years and compiled a hefty 56-1-2 (38) record, he only seems to be getting bigger, better and stronger.

Plant, at 29, might be at his best, too. And though it can rightly be argued he finds himself ranked as the second best super-middleweight by default – the likes of Callum Smith and Billy Joe Saunders, for example, saw their rankings hit by defeat to Canelo – he is indeed worthy of taking on Álvarez in a bout to crown the only king at 168lbs. Both slick and brave, Plant – 21-0 (12) – doesn’t have fight-ending, one-punch power but what he really lacks, and what he’ll get here, is serious top level experience. With that in mind, anyone picking Plant to not only make that jump but also land on his feet, will know far more than wins over fighters like José Uzcátegui, Vincent Feigenbutz and Caleb Truax could possibly tell us. Though officially five inches taller at 6ft 1, his 74-inch reach is only one inch longer than his opponent’s.

STRENGTHS
It’s difficult to know where to start with Canelo. A supreme and intelligent boxer who is at his best when in the pocket, Canelo’s biggest strength might be that it’s difficult to pinpoint a weakness. His punching power is increasingly impressive; one only has to look at the manner in which he stopped light-heavyweight Sergey Kovalev in 2019 and the state of Billy Joe Saunders’ caved-in face in May this year as two recent examples. He will attack both body and head, artfully orchestrate openings with his own defence and his footwork is balletic but never showy. He effortlessly shifts his weight from one foot to the other, always mastering and dictating both the pace and distance. Nobody since José Miguel Cotto in 2010 has managed to seriously wobble him. Even Golovkin, particularly in their first 2017 encounter, struggled to dent Álvarez despite landing full-blown slugs on more than one occasion. Throw in the fact he’s the biggest draw in the sport and the advantages such status brings, and Canelo is the closest thing to unbeatable the sport currently has.

Watch a three-minute highlight reel of Caleb Plant and you’d be forgiven for thinking the Las Vegas resident is the second coming of Roy Jones Jnr. Plant has fast hands and feet, he can double, even triple his jab effectively and likes to screw a bizarre but effective uppercut-cum-hook-cum-jab when it suits him. He often throws his punches from the waist, even his jab, which can discombobulate his opponents. Far from one-paced, Plant will patiently up the speed of his attacks as the fight progresses and is always quick to counter and punish any mistakes. Happy on the front or back foot, in defence or on the attack, Plant is versatile in his approach. Though he’s yet to face anyone like Canelo, he’s so far exhibited a solid chin and good stamina. Mentally, Plant – who has endured all manner of hurt in his personal life – is particularly sturdy and that quality will be needed in abundance if he’s to score the upset.

WEAKNESSES
The old notion that Canelo can’t cope with slick boxing has been dispelled so many times since he lost to Floyd Mayweather in 2013 it’s almost pointless to dwell on it. However, Saunders did have some success keeping Canelo behind the jab earlier this year. So while it is untrue to say Canelo struggles, the jab – when used well – can unsettle the superstar for short periods. The first bout with “GGG” highlighted this, as did the rematch to a lesser extent. Sergey Kovalev also backed up Álvarez with the jab and when he managed to add the straight right hand, the Mexican looked uncomfortable.

Plant might be fast but he’s far from unhittable. Even a worn-out Caleb Truax connected with two hefty right hands, thrown in close, as Plant tried to zig and zag his way in. He tends to keep his hands fairly low, often relying on shoulder rolls to change direction and someone as educated and spiteful as Canelo can surely make the American pay for any mistakes. And Plant does make mistakes. His jazzy approach can see him overreach and miss; he’s regularly been tagged as a direct consequence.

HOW PLANT WINS
His jab is key. But it’s imperative that he gains the Mexican’s respect early. Plant is no home run hitter but he has enough on his punches to stop Canelo simply walking through him. Plant must keep Álvarez on the back foot, not allow the Mexican to set himself on the inside and aim for whatever he can hit (including arms, gloves, stomach, chest). Take one round at a time. Many of Canelo’s opponents fall into being overly respectful but if Plant can feint with the jab, as well as doubling it without fear of being countered, he has a chance. In short, keep it simple but effective. Start with the jab, mix it up to head and body (a target zone too often forgotten about by Canelo opponents), throw his right hand with purpose and retain his shape by finishing with the left as Canelo looks to roll away to his right.

HOW CANELO WINS
Against a fighter as agile as Plant, Canelo should look to counter the jab and attack the body. Canelo can take his time in the early going before increasing the pressure in the later rounds. The favourite will be aware of the danger coming from Plant’s right hand and look to offset the threat with left hooks, up and down. Canelo is a supreme combination puncher, often using the first one as decoy to set up what comes next. Attacking the body will go some way to slowing down his opponent, so too his ability to slam home straight punches before immediately switching to hooks and uppercuts in close. Canelo’s head movement and feints, as he burrows inside, are almost as important as the punches that follow.

THE OUTCOME
Plant’s style gives him hope. He may have success in spots. But to retain concentration for 36 minutes, while landing enough of his own punches to bank the required amount of rounds to win, is a massive ask for “Sweethands”. If Canelo breaks through early, this one could finish inside the first six. But the feeling is that Plant is genuinely ‘up’ for this challenge and will bring out the best in his opponent. And the best of Canelo is bad news for anyone facing it. Expect Álvarez to crank up the pressure, have Plant teetering on the brink of defeat by the closing rounds only for the underdog to gutsily hear the final bell before losing a wide verdict.

UNDERCARD
Barely worth writing about. The super-lightweight 10-rounder between Elvis Rodriguez (11-1-1), a 25-year-old southpaw from the Dominican Republic, and Mexican Juan Pablo Romero is okay but not exactly mouth-watering. Leonardo Baez (21-4) of Mexico might give returning super-bantamweight countryman Rey Vargas (34-0) something to think about for a few rounds and super-middleweight Anthony Dirrell (33-2-2) should ease past fellow American Marcos Hernandez (15-4-2).