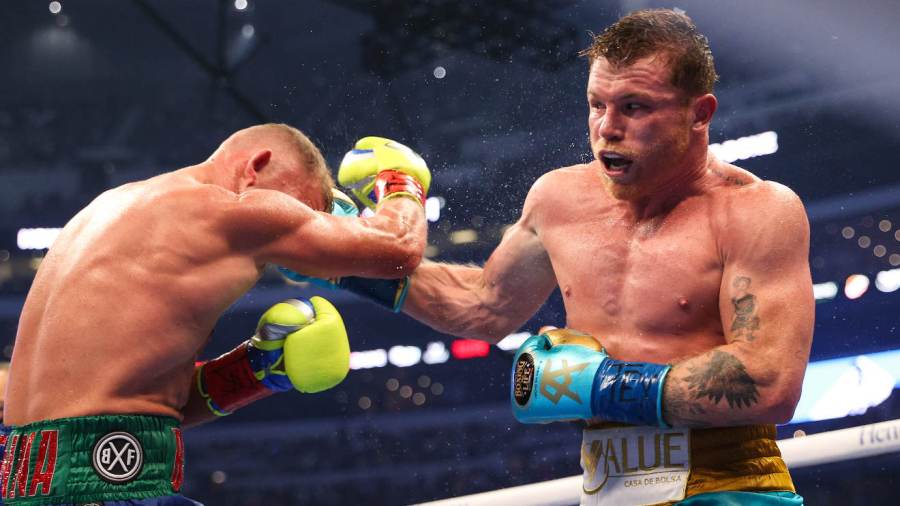 In all my years watching boxing, it’s rare that I’ve seen a fighter as awe-inspiring as Canelo Alvarez, writes Ian Probert

ALTHOUGH I’ve written a fair amount about boxing over the years I consider my ongoing fascination with this addictive business to be little more than a dilettante guilty pleasure. Even at the height of my professional involvement during the 1990s I was never one of those people who knew the name of every six-round fighter in the country. When access to that level of detail was required there was always someone out there willing to fill in the blanks. But even though the sport’s appetisers would rarely fail to serve up a tasty treat or two it was always the main course that unashamedly held my interest. So it remains to this day.

And this is why in the early hours of May 8 I couldn’t resist joining a worldwide audience to watch via live stream as boxing’s finest active exponent showed us exactly how things ought to be done. As main courses go, the performance of Mexico’s Saúl “Canelo” Álvarez was worthy of the maximum three Michelin Stars. Indeed, the ruthless efficiency which Canelo displayed in methodically marching down and breaking apart Britain’s overconfident but patently overmatched Billy Joe Saunders was frightening to behold. For a half an hour the pandemic that has choked our movements for the past year was a distant memory. Certainly it was for far too many of those present to watch the fight in Arlington, Texas; face masks largely being conspicuous by their absence.

In common with many others, the 7/1 odds offered by the bookies on a Saunders win were generous enough to persuade me to put my hand in my pocket a few minutes prior to kick-off. But I might just as well have put a match to my money. On the evidence of Saturday’s performance the two boxers could fight each other a thousand times and the outcome would surely never differ. This is not to diminish the talent, commitment and endeavour of Canelo’s previously unbeaten opponent. Double-weight champion Billy Joe Saunders came into the fight justifiably ranked as highly as third by Boxing News. In electing, however, to put his mouth where the money is, it took less than a round for the controversial Briton to discover that he might have chewed off more than he should ever bite.

Not to put too fine a point on it, WBA and WBC super-middleweight champion Canelo, revealed himself to be on an entirely different level to his opponent; as he is, indeed, to any contemporary who is unlucky enough to find himself in the champion’s firing line. The unfortunate Saunders, whose WBO belt was added to the silverware pot, was comprehensively outgunned in every conceivable department. Indeed, from Canelo’s point of view the only notable difference between Saunders and the heavy bag that hangs in his gym might have been the fact that this one moved a tad less predictably. For it is no exaggeration at all to suggest that some of the body blows that bludgeoned a pathway into Saunders’ rib cage would have had that heavy bag itself doubled up in agony.

This is not to imply that myself, along with any number of others watching the fight, remained completely immune to the intoxicating aroma of hopium. With my judgement compromised by cold beer and misplaced patriotism, I was even able to convince myself at one point that Saunders had managed to nab himself a couple of rounds. I did not have him ahead in the contest as one or two dyscalculic ringside commentators inexplicably did but the Briton’s always impressive hand speed and dependable jab must surely have been enough to earn him a share of the points on offer, however meagre that share might be?

A repeat viewing of the eight-round annihilation, however, cannot fail to place matters into their proper context. In the sober half-light of dawn, Saunders’ gutsy efforts were little more than that. Such were the rivals’ cavernous disparities in terms of quality and cruelty that in truth the contest was as a man to a boy. It was like watching a grown adult play keep ball with a toddler – the latter always two clumsy steps behind, the former producing mesmerising feints and back-heels to rival Maradona. Any punches from Saunders that did actually manage to hit the target – the majority of which were prodding jabs – had only marginal impact. Once again it is only reasonable to stress that this was not down to any limitation in Billy Joe’s technique, conditioning or strategy. Had he been up against an opponent purely of flesh and blood, Saunders would undoubtedly have had a fighting chance against any other man in the division.

Perhaps not too unsurprisingly, the punch stats offer a different perspective to most rational onlookers’ interpretation of the action. According to the numbers, Saunders connected with a total of 120 punches – just 14 fewer than his tormentor. To some, this would seem to suggest that Canelo snatched a win by the skin of his teeth. For the rest of us, however, this pointless statistic only serves to confirm that boxing is not and has never been purely a numbers game. Even so, many seasoned observers were charitable enough to award Saunders at least a couple of rounds. From his position at ringside, for example, my Boxing News colleague Thomas Hauser made Saunders the winner of rounds five and six. Now that the dust has begun to settle, however, the number of rounds that Saunders won or didn’t win is immaterial.

On this showing Canelo would have done exactly the same to any fighter in the world foolish enough to touch gloves with him at the sound of the bell. Indeed, prospective opponents can only hope and pray that we have finally seen the Mexican achieve his peak. Because if the 30-year-old four-weight titlist proves to have the capacity to further refine his already supernatural skillset then surely it is time for the rules of boxing themselves to be rewritten? Perhaps, in the spirit of fairness, Canelo should in future be given a pair of Wellington boots and have points deducted if he chooses to use more than one hand. Better still, he could, perhaps, only be permitted to fight in the heavyweight division. At the very least he should be banned from picking on the British, having cheerfully ploughed a furrow through a further six of Saunders’ fellow countrymen.

What made Canelo’s performance all the more impressive to this observer was its sheer uncompromising brutality. From the sanitised refuge of our living rooms it is all too easy for us to misinterpret the images of human drama which appear on our television screens. Without the  vital missing ingredient of the third dimension a life and death struggle will often devolve into a flavourless flatscreen parody of real world events. High octane drama is reduced to an unthreatening watery broth. And the wax and wane of a well-matched contest can take on a more pastoral demeanour.

Not if Canelo has anything to do with it, however.

To borrow an overused phrase eternally associated with Mike Tyson, every single punch that came from Canelo was thrown with bad intentions. There were few rangefinders. Each trenchant delivery was intended to cause pain and erode resolve. And remarkably few of them failed in their duty, no matter what the punch stats may tell you. Except for the very few shots that I can recall hitting thin air every blow was accompanied by a sound like the crack of a starting pistol.

Saunders came out in round one with the energy and bravado of someone who clearly had no idea what he had signed up for. The calculating manner in which Canelo picked apart his sixtieth opponent was surgical in its precision. Indeed, Saunders’ ruthless deconstruction was redolent of one of those toy clockwork drummers that you may have seen as a child; tightly wound with a rapid beat at the opening bell before inexorably slowing down to a standstill with each relentless blow received.

When that standstill finally arrived towards the end of round eight it was both shocking and impressive in equal measure. That the right uppercut delivered by Canelo had such an immediate and destructive effect on its recipient is testament to the correctness of his punching, something that is easy to overlook when faced with the Mexican’s deep well of talents.

Boxing can only heave a sigh of relief that it remains a rarity for a boxer in Canelo’s weight class to be able to generate enough power from a solitary blow to engender the significant injuries which Saunders suffered. Nevertheless, with the sport facing an uncertain post-pandemic future, boxing can only be grateful to have a Masterchef of Canelo’s calibre as its outstanding figurehead.

Ian Probert is the best-selling author of the children’s books <em>Internet Spy</em> and <em>Johnny Nothing</em>. He has also written two highly-acclaimed books on boxing, <em>Rope Burns</em> (1998) and <em>Dangerous</em> (2016). He is the former editor of <em>Boxing Weekly</em> and has written extensively on a wide range of subjects for myriad publications. Ian was first published in <em>Boxing News</em> in 1988 and after a 24-year break from the sport resumed writing for us in 2014. Recently Ian returned to his first love of painting, his exhibition <em>Dead</em> (2018) drawing an overwhelmingly positive response.