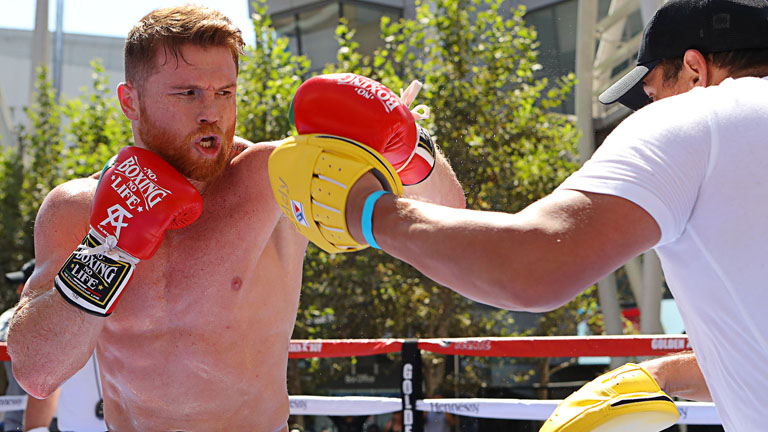 Canelo Alvarez is adamant that he will fight 'GGG'

CANELO ALVAREZ insists he will eventually fight unified middleweight champion Gennady Golovkin, though stresses that the superfight will happen on his terms.

The Mexican has faced extreme pressure from fans to take on ‘GGG’, though will face WBO super-welterweight champion Liam Smith on September 10 first.

Now arguably the biggest draw in the sport, Alvarez understands the demand for him to fight the best but also sent out a reminder to other fighters that he calls the shots.

“No doubt about it, everyone knows that I’m the A-side. The fight will happen when I want it to, that’s the way it is.”

Last November, he won the WBC world middleweight title against Miguel Cotto in a fight made at an 155lb catchweight. He defended that crown in May by flattening Amir Khan in another 155lb-catchweight contest.

When the WBC stuck a deadline on negotations for a fight with mandatory challenger (and IBF/WBA world champion) Golovkin, the 26-year-old vacated his title, which was subsequently handed over to ‘GGG’.

Now, Canelo will shed a pound to fight Smith at the AT&T Stadium in Texas, despite previously insisting he needs time to acclimate to 160lbs – where he would fight Golovkin.

A court battle with his former promoters took up a lot of Canelo’s time in that period, and he claims that focus is why he got rid of his title.

“The critics out there are going to use their power to try and make the fight, with good comments or bad comments, or criticising me for the fight not coming across,” he said.

“Big fights like this take time, negotiations take time, there are things behind the negotiation table that we need to get together and come across. Especially with the WBC organisation, they wanted to put in a timeline and their rules and input into the negotiation – this is a negotiation between promoters and fighters, not with the WBC, they can’t dictate and try and pressure me into this fight as soon as possible when I had other things to take care of in my personal life. The WBC wanted to put pressure on me, making timelines, I’m not going to let anybody pressure me – I’m a fighter and I had issues I needed to sort out first.

“We spent 24 days in Miami until we finalised the case. Why does the WBC have to put on a timeline? There’s no reason for them to dictate anything in the negotiations for a fight or a fighter, there’s the belt but my personal issues were in court, we were in court for 24 days and first things first.”

Canelo, whose sole professional loss came to Floyd Mayweather in 2013, refuses to concede that not fighting Golovkin would harm the legacy he leaves behind once he retires.

Having beaten the likes of Erislandy Lara, Cotto and Shane Mosley, Alvarez feels Golovkin is the one who should be concerned with how he will be remembered.

“I’m 26 years old, I’ve fought some of the best fighters in the world out there, every fight I’m making history. He’s the older fighter and he hasn’t fought anybody, he’s the one who has to worry about his legacy, I don’t have to worry about mine,” he said.

A week before Canelo fights Smith, ‘GGG’ will defend his world titles against Kell Brook, who is moving up from welterweight, where he owns the IBF world title.

Canelo has been fairly critical of the matchup and feels Brook will be too small to trouble Golovkin.

“Amir Khan went up one division when we fought, ‘GGG’ is making Brook go up two divisions for their fight and he criticised me so many times,” he said.

“That’s why I say, ‘don’t open your mouth, because you’ll bite your tongue.’

Smith, despite being an unbeaten world champion, has been cruelly dismissed by some sections of the media and public.

The Liverpudlian understands that the American press aren’t aware of him as he has never fought in the States, though Canelo insists he has studied ‘Beefy’ and is not overlooking him.

“I’ve seen a couple of his recent fights, his style is a come forward style. He takes punches really well, he’s very strong, very powerful, he likes to fight. It’s going to be a great fight,” Alvarez said.

“There’s always negative criticism out there, especially in this case. Just because no one really knows his name, he’s not a big name in the United States, it doesn’t mean he’s a bad fighter. There are always going to be critics who put people down, put him down. We’re going to fight and, come September 17, see if he’s the fighter he says he is.

“My priority right now is Liam Smith in September. If everything turns out good, God willing, I’d like to fight again in December, that’s the plan.”

To read an in-depth feature on Canelo Alvarez, grab this week’s issue of Boxing News magazine. To subscribe, click here.