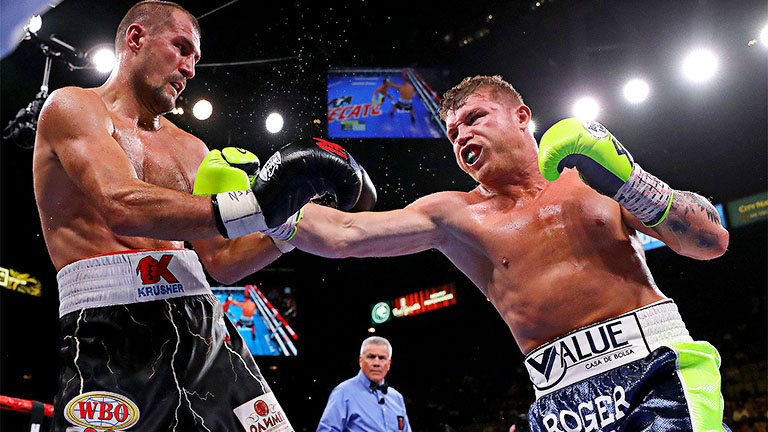 MIDDLEWEIGHT champion Canelo Alvarez stopped Russia’s Sergey Kovalev  in the eleventh round of a 12-round fight to take the WBO light-heavyweight title and become a four-division world champion las night (Saturday, Nov 2) at MGM Grand Garden Arena in Las Vegas.

“I’m very thankful,” said Mexican superstar Canelo Alvarez. “This is just a step in my career, in my history, and all I ask of you, is to be patient because Canelo will make history. That’s a guarantee.”

“The plan overall was patience, that was basically it – to have patience. We knew it was going to be five, six rounds and it was going to take some time for me to get him. But honestly he’s a great fighter. I’m new at this weight, new in this division. Much credit to him, he’s a great fighter, but we stuck to our game plan. It was delayed a little bit but overall it was successful.”

“It was a very close fight because he was defensive, he was closing up his guard. All he was doing was trying to establish points, but we knew what was coming. Inevitably it would come, and everything came out the way we had planned.”

“We have to see what happens. We have to do what’s best for us. We have to look for the best fights, the big fights, but obviously give the victories to Mexico.”

“I was tired after round 6, because I had my last fight very close to this one, but it’s okay, it’s a new experience for me,” said Sergey Kovalev. “Canelo is really a great champion. A little bit right now, I didn’t recover from my last fight. But it’s okay. Thanks for the fight Canelo, I have big respect for him. He made history.”

“I know that I can be a unified champion, let’s make a unification fight. But nobody wants to fight me in my division. This guy is more fresh, he came into my division more fresh. He has more stamina, but it’s okay, it’s a good experience for me.”