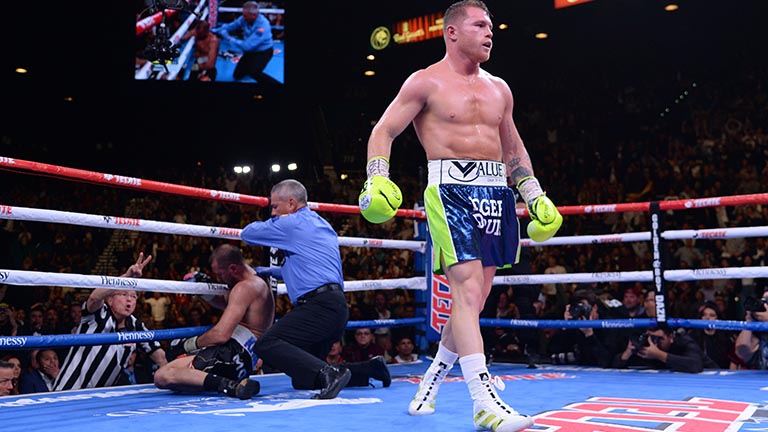 THE physique was thicker and the face, after eating too many jabs, was redder. The opponent was bigger and the threat was greater. But in the end, the result was the same. Canelo Alvarez – the current leader of world boxing – won yet again when he knocked out Sergey Kovalev at 2-15 of the 11th round.

This was no gimme. Kovalev, even at 36, was a real opponent and so it proved during a fascinating bout that ended with Canelo Alvarez winning a world title in a third weight class, this time the WBO light-heavyweight championship. Heap nothing but praise on the superstar’s broad shoulders. He emerged from a difficult and taxing encounter inside Las Vegas’ MGM Grand a knockout winner.

The Russian veteran boxed well, his jab was accurate, he even rallied in ninth and 10th sessions to leave the contest poised. At the time of the knockout, Canelo – now 53-1-2 (36) – was up 96-94 on two cards and level 95-95 on the third. It was a cagey bout between two excellent boxers.

The finish was savage. Kovalev, no doubt physically and mentally exhausted but still firing with his jab, failed to get his right hand in position to block an incoming left hook.

It was as much a mistake on Kovalev’s part as it was a mark of Canelo’s brilliance; after going to the body with it for so long, Kovalev was conditioned to expect another raid downstairs. The direction changed mid-flight. It arced upwards, powered into the side of the veteran’s face and wrecked his equilibrium. As Sergey’s left arm dropped and his legs struggled to stay steady, Canelo’s right hand was hurtling towards the target. It crashed into Kovalev’s jaw and sent him down to the canvas in a heap.

It was hugely impressive. For Kovalev, once the most feared slugger in the sport, it was an inglorious end.

For the historians among you, think of the way Archie Moore crumpled when he lost to Rocky Marciano in 1955, nestling into the ropes like a drunk.

Moore and Marciano are two undisputed legends of the game and much of the post-fight talk was about where Canelo, still only 29, figures in history. Even now, even after this victory, it is still too soon to say. But the Mexican, after defeating Gennady Golovkin, Daniel Jacobs and now Kovalev in the last 18 months, must surely be regarded as the best of the current era.

So what’s next? There was talk of a third fight with Golovkin. At this point, with “GGG” seemingly fading and Canelo getting bigger and better, a contest between the two rivals lacks the intrigue of their first two encounters.

But Canelo’s name figures prominently in three weight classes. He jumped from middleweight for this opportunity. Yet it would be a surprise to see him strip weight and return there. The light-heavyweight division is unlikely to retain his services, either. It would seem that Canelo – a former 154lb king who started out as a welterweight – will settle at super-middleweight, at least for his signature Cinco de Mayo outing in May, a division where he is yet to win a world belt (the secondary WBA bauble he strapped on after beating Rocky Fielding last year does not count).

Canelo Alvarez can do what he likes. After all, he is the sport’s star striker. But to write him off as a mere goal hanger, lurking in the six-yard box waiting for the balls to bobble in front of him so he can smash them in, would be doing him a disservice.

Without question, his star appeal was recognised early on and his talent nurtured carefully. In that regard, he is fortunate. He has been protected to a degree. The failed drug test and subsequent six-month suspension will be an eternal black mark. But look at his record and you will find numerous examples of a fighter who has worked hard to achieve his goals. There has been the odd tap in – like that Fielding win and bogus title – but he would not have been in such a position if he didn’t take the ball and run with it with all his might.

As always, where Canelo ends up will be up to him. He answers to no one. Not his team mates. Not his promoter. Not any governing or sanctioning body. He has free reign of his destiny and that, much to the critics’ annoyance, highlights the immense power of his status in the sport today. But such power is not gained accidentally, or handed over to anyone. It is reserved only for extra special fighters and Canelo Alvarez is exactly that.