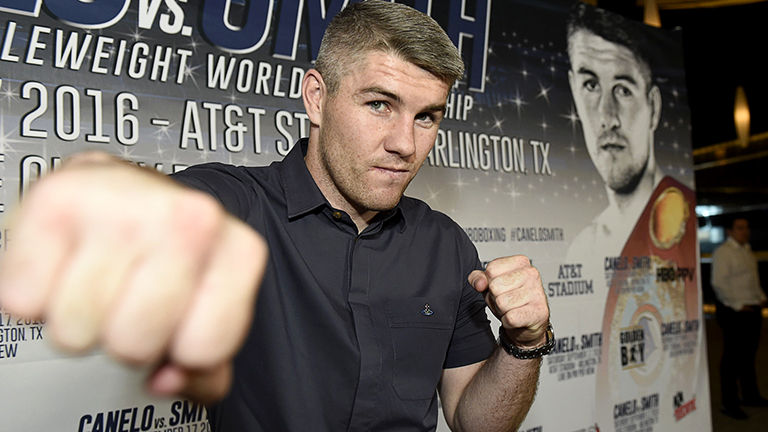 CANELO ALVAREZ insists WBO super-welterweight champion Liam Smith is the right challenge for him on September 17.

“I have looked at him, and the style more than anything is what we like. He’s a good fighter,” Alvarez said. “He’s a champion. He’s very strong. He’s got a Mexican style, you know, a guy that stands there and likes to exchange punches, so that’s one of the things that attracted us to the fight. And, you know, part of the reason for choosing him is he’s a world champion. I want to win another world title in my weight class, 154. Then after that we’ll see what’s available.”

Canelo doesn’t believe the occasion at the AT&T Stadium in Dallas will affect the Liverpudlian. “I don’t think he’s going to change his style. I think he’s going to do what he does best be aggressive, throw combinations, keep coming forward. That’s what he does best. But, obviously, for me, I’m always ready for any style. I prepare myself for any style and I’ll be ready for anything,” Alvarez continued. “Look, whether people consider if he has a name or not, he’s still a very good fighter. He’s a champion and he’s undefeated for the right reasons. So I’m preparing like I always do, 100%. I’m getting ready for this fight. I’ll be prepared for everything. I just don’t want any surprises, but this is going to be a tough fight.”

Promoter Oscar De La Hoya expects a huge crowd and for Canelo to outsell Manny Pacquiao’s events at the same stadium. “I don’t know the exact number. I do know that the building can be scaled for as many as over 80,000 people. So, like I said, ticket sales are going incredibly well. We’re outpacing the last two Manny Pacquiao fights that were held at AT&T Stadium. So Jerry Jones is extremely happy. The fans are happy. We’re happy. And I’m sure that Canelo and Liam Smith are going to be really happy when they see the turnout at the arena,” De La Hoya said. “Well, I mean, look, it would be very impressive. But at this point nothing surprises me with Canelo. Like I said, he’s only getting better. He has a tremendous fan base, and ticket sales show it. He has millions and millions of fans around the world, and ticket sales are proving that.

“We really can’t say how many Pay-Per-Views he’s going to sell, but we’re expecting a big number as always. We strongly feel that Canelo’s star power is only growing. And as we get closer to the fights, we’ll have a better indication.

“But we always gauge our numbers by how many tickets we’re selling in the arena. And as you know, we’re outpacing Manny Pacquiao in ticket sales at the AT&T Arena. So we expect a really strong number come September 17.”