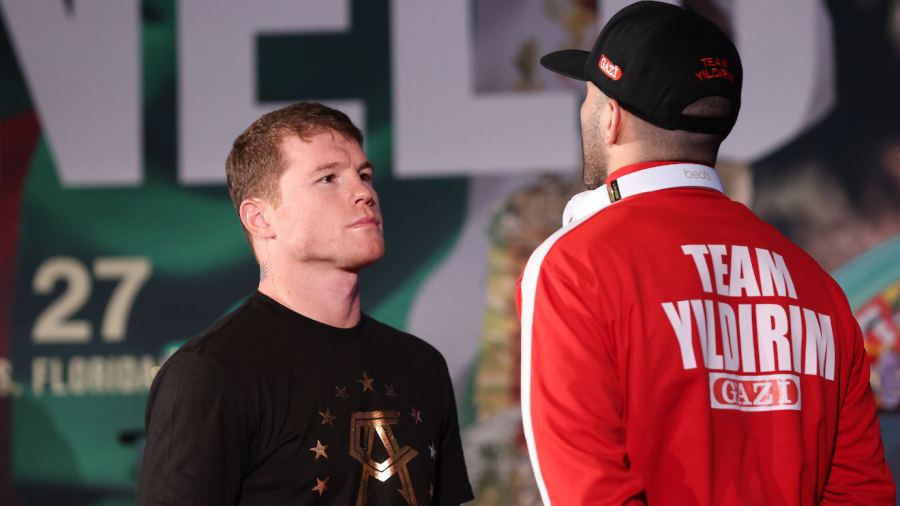 AHEAD of Saturday’s WBA and WBC super-middleweight title fight at the Hard Rock Stadium in Miami, Canelo Alvarez and Avni Yildirim faced one another in their last press conference on Thursday.

Canelo is the overwhelming favourite in this fight but he insists, “I respect all fighters. I respect the challenger that’s in front of me right now. I know he’s a strong fighter. I know he has a lot of tools. I have the same mentality. I’m trying to do my job, and I’m trying to make history.”

The history he is eyeing is becoming the undisputed 168lbs boss in 2021. The indications are that he will fight Billy Joe Saunders, the WBO titlist next, and remain active. He intends to fight four times in 2021, an unusually busy year for him.

“I love being here. I love being in the gym. It’s my life. We’re going to take these fights fight-by-fight, and hopefully I can fight four times this year,” he said. “I’m focused on my rival Saturday. I know right now, this fight is the only one that exists for me, and I’m focused on what I have to do, my job for Saturday.”

DAZN will screen Canelo’s fight for £1.99 a month in the UK. You can sign up HERE (and get Joseph Parker vs Junior Fa too)

“He’s a big champion, everyone knows that. I’m ready for the world championship title for the big chance. It’s my time. Saturday, for everyone, it’s showtime.”