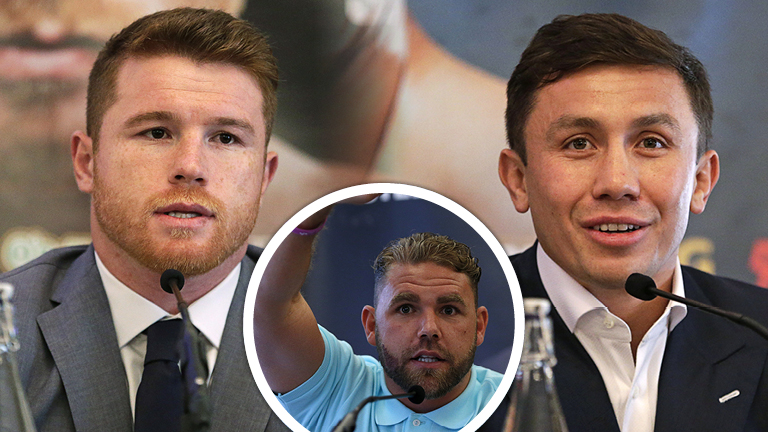 Canelo Alvarez and Gennady Golovkin were left unimpressed by Saunders

CANELO ALVAREZ claims he did not recognise Billy Joe Saunders when the WBO middleweight champion interrupted the Canelo-Golovkin press conference earlier today and fired questions at the two fighters.

Saunders, who will fight on the same night (September 16) in London, asked Canelo why he vacated his WBC middleweight title last year instead of fighting ‘GGG’ and asked whether the winner of their fight would face him.

Though there had previously been talk of Canelo fighting Saunders, the Mexican superstar admitted that he didn’t know who was asking him the questions earlier today.

“I didn’t even recognise him. I saw him, but he’s got to come down in weight first before he fights one of us,” he said.

Golovkin came closer to fighting the unbeaten Brit. After he defeated Danny Jacobs in March, Gennady’s team began talks with Saunders’ about a summer clash in Golovkin’s native Kazakhstan. That fight failed to materialise, and Golovkin signed to fight Canelo.

The WBA, WBC and IBF champion was amused by Saunders’ antics at the press conference, but also claimed that Billy Joe turned down two possible dates for their fight, which would create an undisputed middleweight king.

He is funny. He talks [very] much. He is not a promoter, he talks too much,” Golovkin said.

“I remember for this summer, for June, my promoter [Tom Loeffler] said for him [Saunders] June 4 or June 10 but no, he’s not ready. After this time my focus [turned] to Canelo. Everybody says ‘did you see Billy Joe Saunders talking so much?’ Come on. It’s not interesting. My fight with Canelo is [a] different story. If you want a fight with me and him, please bring him to the ring. He knows. He said no two times. I was ready, I said ‘Tom, please, bring me this fight.’ He said ‘no he’s not ready for June 4 or June 10.’ OK, so my focus [goes] to Canelo.”