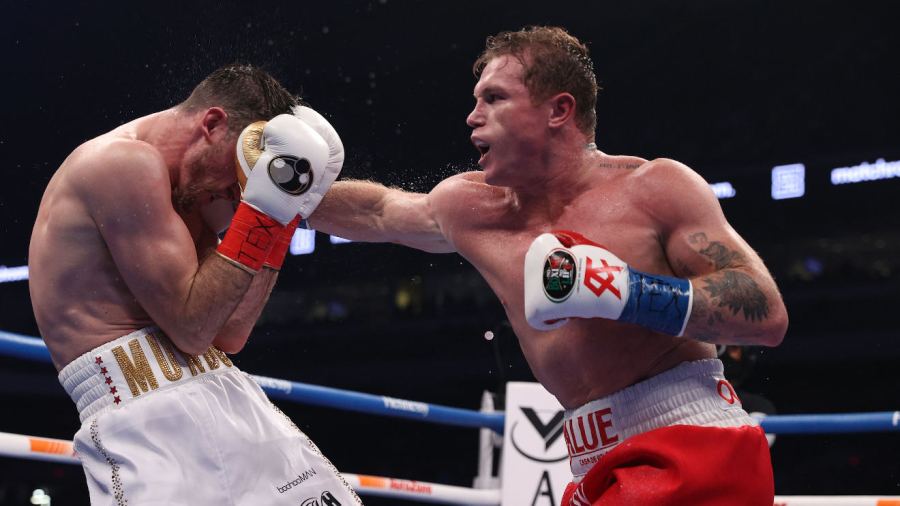 CANELO ALVAREZ hammered Callum Smith over 12 punishing rounds to unify the WBC and WBA super-middleweight world titles on Saturday (December 19) at the Alamodome in San Antonio.

Liverpool’s Smith came into the fight with a towering height advantage but the Mexican’s ability to close him down was frighteningly effective.

Smith starting out jabbing, feeling his way into the bout. But round by round Alvarez upped the intensity. Canelo teed up heavy left hooks and beat Smith to the mark with solid jabs.

Smith’s punching looked lighter, his blows bouncing off Alvarez’s gloves. In contrast Canelo’s shots were hurtful even as he slammed them into Smith’s arms. The Briton landed short uppercuts when up close, lashing his right hook in when he found an opening. But he could only throw infrequent combinations, Canelo’s defensive movements were too good even as he came forward.

Throughout Alvarez maintained his aggression. In the second half of the contest, he drove Smith across the ring. Canelo pinned him on the ropes more often. He blasted his cross to the body, slammed his right hook through to the head and ripped his own long uppercuts in.

Alvarez was banking rounds while Smith was feeling the effects of those shots. His face was marking up, blood streamed from his nose and at times he almost wilted as Canelo barrelled into him on the ropes. But Smith endured. He kept his feet under him and while he could not drag the momentum of the bout his way, he refused to yield and saw out the last round, relying on resilience and bravery to go the distance.

“I’m devastated, I never wanted to lose,” Smith said afterwards. “He’s just smart to be honest with you.”

“His jab surprised me a little bit,” he added. “I let him close the ground a little too easy.”

“I don’t feel as dominant late on in fights,” he said, hinting at an eventual move up to light-heavyweight. “I may have outgrown the weight.

“I’ve been to the top of the mountain. I’ve been knocked off it.”

Canelo Alvarez was well pleased with his performance and rightly so. “I did a great job,” he said. “Callum Smith is a great fighter.”

“One of the best nights for me,” he continued. “One of the greatest fights I’ve had. I’ll go for more.

As for Alvarez’s next move, he didn’t rule out a third fight with Gennady Golovkin. “I don’t run from nobody. I showed [that]. I just fought against the best,” he said.

With this performance, dominating a leading super-middleweight, after vacating a light-heavyweight world title, confirmed that Canelo Alvarez is indeed the pound-for-pound ruler of the sport today.