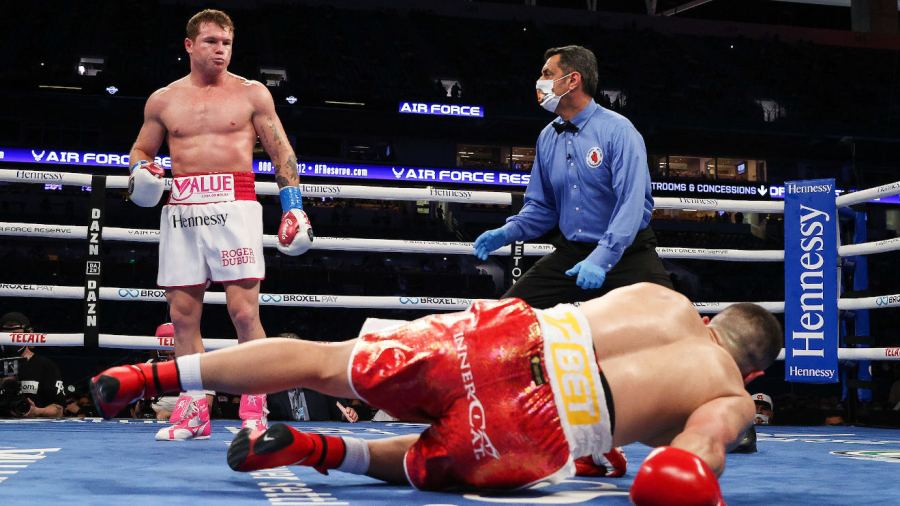 Canelo Alvarez takes an all too easy win in Miami, but he sets a date and an opponent for his very next fight

CANELO ALVAREZ dismantled Avni Yildirim to retain his WBC and WBA super-middleweight titles on Saturday at the Hard Rock Stadium in Miami.

Yildirim, a mandatory challenger for the WBC belt, was just as ineffectual as expected. He began tamely, not even managing to touch gloves with Alvarez let alone land a meaningful shot.

Canelo was firing through crisp shots from the first round. He targeted the body, a couple struck the belt line. But soon enough Alvarez was teeing off. He struck Yildirim with a fine right uppercut. His left hook curved round beyond the Turk’s elbow. The left hook again set up a cross. Yildirim swung a right at him but missed widely and Alvarez countered with a  hard uppercut.

Yildirim was tucking up behind his guard but was offering no offence. A one-two scythed through between his gloves to drop Yildirim heavily. He covered up on the ropes but Canelo hammered him, shots hitting the body and the head. Alvarez hurt him with a body shot and cracked his right hook round Canelo’s guard.

Yildirim managed to return to his corner. His trainer Joel Diaz said to him then, “If I don’t see you work I’m going to stop you.”

But even then the Turk was unresponsive and his corner pulled him out of the contest, sparing him from a knockout that at that point was inevitable.

It sets up Alvarez’s next fight. He will meet WBO super-middleweight titlist Billy Joe Saunders in a unification contest on May 8.

“I came here to my job, I came to win, I came to make history,” Alvarez said afterwards. “I feel strong, I feel fast, I feel comfortable.

“I want to make my own history. I don’t want to be equal to anyone.”

After Julio Cesar Martinez suffered an injury during the week of the fight, Abraham Rodriguez arrived in Miami only the night before his Interim WBC flyweight bout with McWilliams Arroyo on the undercard.

Tijuana’s Rodriguez was sprightly, at first, as he hacked at Arroyo with his left hook and right uppercut. But the Puerto Rican maintained consistent pressure. He kept closing in on Rodriguez, forcing the Mexican to back off. Arroyo tagged him with combinations up close, hurtful shots going in in the third round.

A left uppercut shook up Rodriguez in the fourth and Arroyo continued to walk him down, screwing in hooks and ripping in punches to the head. He forced the Mexican to the canvas. Rodriguez had to survive an onslaught to make it through the remainder of the round.

Rodriguez moved off in the fifth, trying to escape, but Arroyo hammered him with another right. He was hurting Rodriguez and the Mexican’s corner had seen enough punishment and compassionately pulled him out.

You can watch this bout and an archive of Canelo contests on DAZN. See HERE

Towering Chinese heavyweight Zhilei Zhang started well enough. He landed heavy shots from the first round, dropping Jerry Forrest with a short southpaw left. Zhang wobbled the American and dropped him in the second and again, in the third round, he hurt Forrest with a right hook and put him down with the left.

But the gallant American was not dissuaded. He stuck to his task, slinging long shots through. Forrest attacked the body and dictated the second half of their 10 round contest. He dug punches into Zhang’s body. The Chinese fighter visibly tired and consistently held Forrest in clinches. The referee eventually took a point for that.

In the 10th and last round the gutsy American shook Zhang up and left the big Chinese heavyweight clinging on for a draw. Two judges scored 93-93, one had it 95-93 for Forrest.