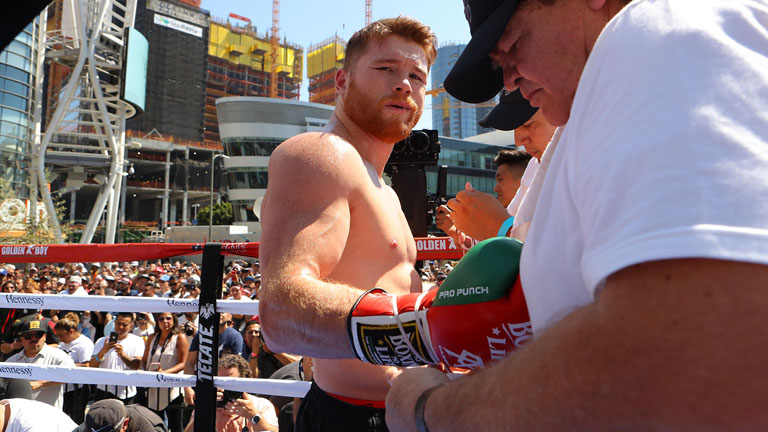 BILLY JOE SAUNDERS and Martin Murray, who will contest the WBO middleweight title on June 23, have condemned the six month ban meted out to Canelo Alvarez after the Mexican failed a drug test for traces of clenbuterol.

Both see the ban as too lenient. “They should let everybody take drugs [if that’s going to be the penalty],” said Saunders. “There have got to be consequences. Because whoever’s in that ring, they’ve got families to go back to.

“They should be banned for life.”

“It is no deterrent for these fight young fighters coming up.”

“To be banned for six months I don’t get it,” promoter Frank Warren echoed. “Most guys who operate at that level fight twice a year… It’s pointless the whole thing is just a pointless exercise.

“If you want to stop drug taking in boxing, you’ve got to be severe.”

It would however be hard for Murray or Saunders to walk away from a potential fight with Canelo, given the kind of money he generates. “For that type of money I think my mum would fight him. And I think she’d win, knowing my mum,” Martin said.

“Boxing is a business,” Saunders conceded. “Now he’s gone down in my estimation so much… He’s a cheat…

But their focus has to be on their own world title fight at the O2 Arena in London on June 23. “You do get overlooked a bit,” Murray warned. “Let’s just focus on this fight first.

“I have got respect for Billy, he’s a good lad. He stands in the way of me finally becoming world champion and getting those big money fights.

“There’s never been a world champion from St. Helens so I want to create a legacy for myself.”

“In my own heart and my own head, I know I can dig deep,” Saunders said. “I want to move on to bigger and better the same as he does… I’m chasing the big fights.

“The reason why I took Martin Murray … is because I need someone to get up to train for,” he added. “He went 11 rounds with Golovkin, fought his heart out and I’ve got to give him respect for  that.

“Am I as good as Golovkin with Martin Murray?”