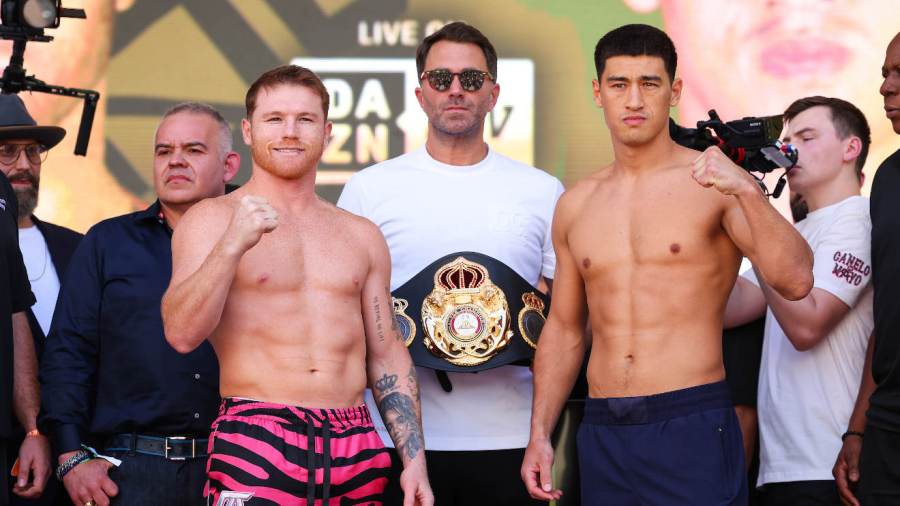 Declan Warrington watches Canelo Alvarez weigh in for his light-heavyweight clash with Dmitry Bivol, but sees the signs that it would be unwise for the Mexican to keep on moving up in weight

Saul “Canelo” Alvarez is expected to overcome the significant size disadvantage that was again demonstrated when he and Dmitry Bivol weighed in for Saturday’s fight at the T-Mobile Arena in Las Vegas. But as they did so it showed that he should surely resist the temptation to again move up in weight.

It is little secret that should, as expected, he collect a 58th professional victory against Bivol then on September 17 he would return to super-middleweight to fight Gennadiy Golovkin for the third and likely final time. Bivol is only his second opponent at light-heavyweight and Golovkin has been discussed as much as, if not more than, the Russian in Vegas; Alvarez, however, has also somehow had to answer questions about him fighting in the region of 200lbs.

Even in the era of lucrative crossover fights with mixed martial artists and exhibitions equally lacking in taste, him weighing in at 174¼lbs for the meeting with Bivol was a reminder of why a fighter who first fought at super-lightweight should not be in contention to challenge for a world heavyweight title and, in Oleksandr Usyk, one of the two greatest cruiserweights of all time. Mexico’s Alvarez may be at his peak and the world’s leading fighter, but as Bivol, at 174½lbs, stood in front of him, his frame showed the significant challenge Alvarez faces.

Victory would represent Alvarez’s finest since that over Golovkin, but Usyk is not only arguably more skilled than the Mexican, he is also big enough to have beaten Anthony Joshua with seeming ease. Less ambitious opponents – Ilunga Makubu among them – will not enhance Canelo’s already admirable legacy. His frame at light-heavyweight also again showed the extent to which he will struggle to compete with the very best.

“To go on and challenge in different weight divisions, where people said it was impossible, given my stature, is historic, and I want to make history,” Alvarez, unquestionably shorter and more compact than Bivol, said earlier this week.

Tomorrow night he may feel differently. If he doesn’t, should that ever become a reality, at some point he almost certainly will.