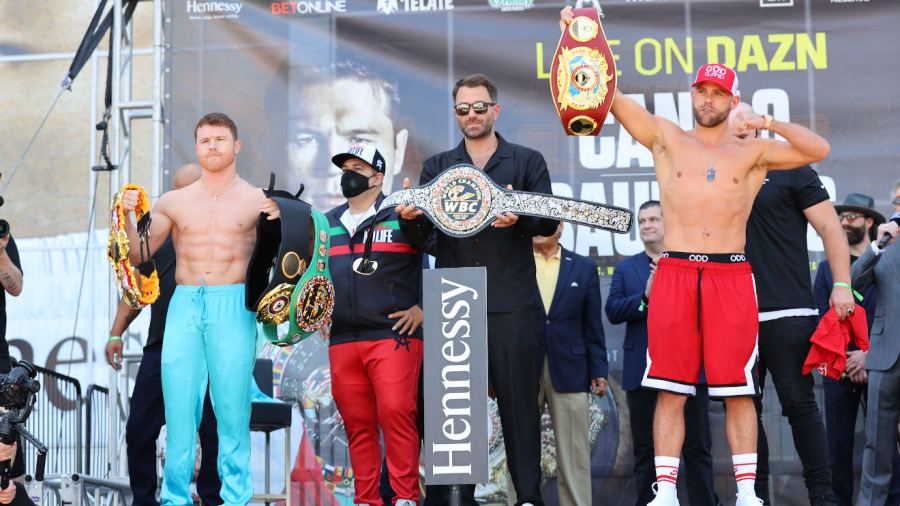 CANELO ALVAREZ and Billy Joe Saunders made weight for their super-middleweight unification. The two box at the AT&T Stadium in Arlington, Texas for the WBO, WBA and WBC titles on Saturday.

Today (May 7) Canelo Alvarez, in magnificent condition, scaled 167.4lbs. Saunders’ conditioning has been variable in the past but he was also in great shape, weighing in at 167.8lbs.

Tension has bristled between the two camps this week, with Billy Joe Saunders demanding a 22 foot ring for the fight and eventually getting it, but not before John Ryder had flown to Texas as a potential replacement opponent.

But this fight remains on and the finalities have been completed. After appearing on the scales the two fighters stared into one another’s eyes without blinking, their last head to head before the fight. Saunders remained animated and Alvarez shook his head once they were finally parted.

Saunders, who holds the WBO title, warned, “I have the spirit, I have the belief, I’ve got the winning mentality… I’ve come here to take all of these titles and take them by storm.

“As long as I bring my fighting spirit and my brains I’ve got it.”

Alvarez, who has already unified the WBA and WBC championships, insisted Saunders would be tricky early on. “A hard fight especially in the beginning rounds,” he said. “He’s a difficult fighter and he’s also a southpaw but at this level you have to adjust to anything.

“Hopefully tomorrow we can give you a good fight.

“I’ve been in big fights before I have the experience to deal with it, I’m ready for tomorrow.”

DAZN will screen the fight in the UK and the US. Sign up HERE for just £1.99 a month

Eddie Hearn, the promoter of this event, is relishing breaking an US indoors attendance record with this fight. “We’re going to have 70,000 people in there,” he said. “You’re going to see I think the greatest atmosphere you’ve ever seen at a boxing event… We break the US record on Saturday.

“It shows you that when we make great fights, this is the greatest sport of all.”