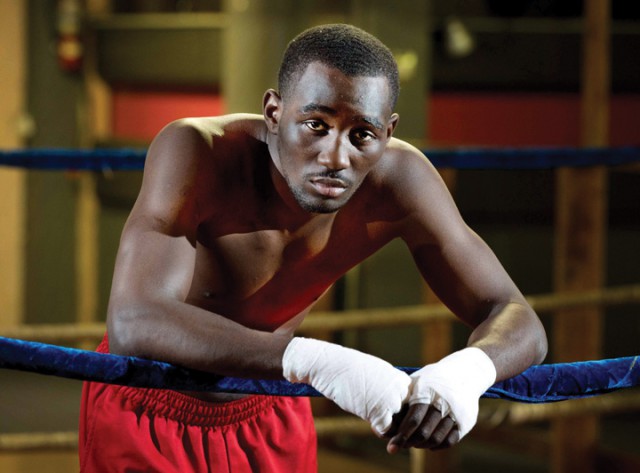 THE MGM Grand is full of boxing fans. They loiter around the Broadcast Center hoping to get a glimpse of their idols. People like Bernard Hopkins, Evander Holyfield and Mike Tyson have all been spotted today. A slight figure walks through the crowd unnoticed. It’s Terence Crawford, a fighter touted by some experts to be the heir to the crown that Floyd Mayweather and Manny Pacquiao contest on Saturday night.

Crawford has been a revelation since he dominated Ricky Burns over 12 rounds to claim the WBO lightweight title last year. Since then, quality trio Yuriorkis Gamboa, Raymundo Beltran and Thomas Dulorme have been thrashed and a second world title at light-welterweight gained.

In his home of Omaha, Nebraska, 27-year-old Crawford is a star. But the rest of the world is largely unaware of his brilliance.

Watching Crawford fight – fluid, intelligent, and spiteful – it’s easy to imagine him one day ruling boxing. But today it’s a tougher vision to conjure. Quiet and polite, he seems a long way from becoming a superstar in a noisy world.

Crawford has fought in front of around 12,000 people in Omaha. But the Mayweather-Pacquiao showdown is on another level altogether.

“Who wouldn’t want to fight on a stage like this?” he asks with a smile. “This shows what it’s all about and what you’re working for.”

The Nebraskan admits he doesn’t envy the task in front of either fighter on Saturday night. Both, he believes, would be hard to fight but predicted that Mayweather would ultimately triumph on points.

“I don’t know [how to beat Mayweather]. I would have to train and come up with a great plan that nobody else came up with. All his opponents have tried different plans, and all of them have failed. I’d have to come up with a good plan.

Crawford is all about smart boxing. About picking the right moment to strike. With Mayweather and Pacquiao at the end of their careers, Crawford is in position to strike. One suspects the next time he’s in Vegas he won’t go unnoticed.

WE TELL YOU WHO WINS THE MAYWEATHER-PACQUIAO SHOWDOWN