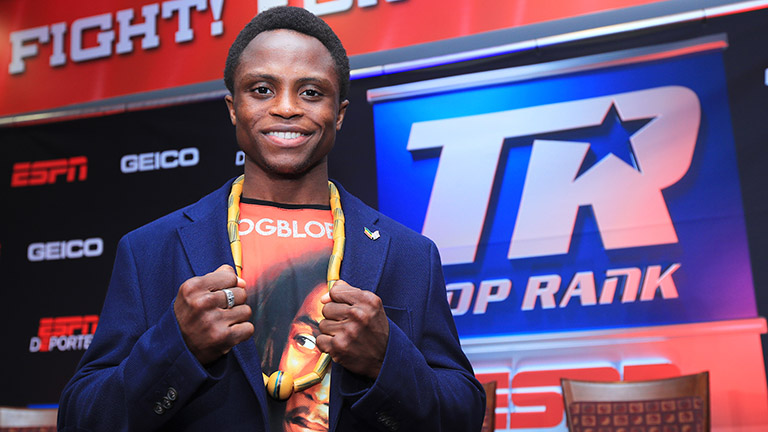 'You can't go into the playground to play with the big boys, and later on, you go crying about it.' John Dennen sees the method in the Isaac Dogboe trash talk

ISAAC DOGBOE is a warrior. He hasn’t previously seemed like much of a trash talker. But he was fully prepared to rile WBO super-bantamweight Jessie Magdaleno on Thursday at the final press conference ahead of their fight this weekend.

He condemned Magdaleno as “the worst world champion ever” and mocked the American for blocking him on social media. “I guess I send shivers into people’s spines,” Isaac said.

Magdaleno hit back. “You look worse than me,” he said. “You look like an alien.

“I can’t beat him any uglier than he already is,” Magdaleno continued. “Come Saturday, we’re going to give him the name that he deserves … the ugly Dogboe.”

“I can sense fear in Jessie Magdaleno already. He can say whatever he wants to say, but when he gets in the ring, he’s really going to find out,” Dogboe declared. “This camp, they started all this social media [stuff]. Look, you can’t go into the playground to play with the big boys, and later on, you go crying about it. When you want to do something, you have to come prepared.

“I guess now he finally his balls to step up to the plate, accepting this fight. I hope come Saturday night he’s prepared and doesn’t complain about anything.”

Magdaleno promised Isaac a punishing night. He said, “We’re ready for Saturday night. I know this is coming. I hope he’s ready because I came ready. I don’t want no excuses. He’s going to get the ass whooping he deserves. I’ve been waiting to fight him. All that trash talk on social media, I hope he puts it up on Saturday night because I’m ready. I’m ready to give him what he deserves.”

There is perhaps method to Dogboe’s trash talk. Isaac is dangerous, aggressive and strong on the front foot. But Magdaleno can box deftly on the retreat and bring opponents on to well-timed southpaw punches. Dogboe wants to goad the champion into a toe-to-toe brawl, the kind of fight he feels will suit him. Whether Magdaleno falls into the trap, we’ll see on Saturday night.