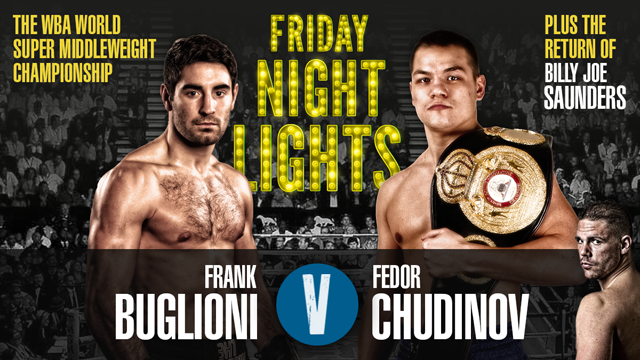 Buglioni goes in deep with Fedor Chudinov on July 24

BOXING can bestow unlikely title shots. Frank Buglioni burst on to the professional scene, racking up stoppage victories and bringing a vibrant fanbase with him. But his momentum came to shuddering halt when he ran up against Sergey Khomitsky, a grizzled veteran who stopped him in six rounds last year. The Enfield super-middleweight repaired with four victories but was held to a draw by Lee Markham in May.

Now however he returns to Wembley Arena for the toughest opponent of his career, WBA titlist Fedor Chudinov. The dangerous Russian is unbeaten in 13 fights, has won 10 of them inside the distance and beat Felix Sturm in Germany to win the vacant regular title from the WBA.

“It’s a dream come true for me to fight for the world title and I can’t wait for the opportunity. Being from an Italian background you could say it’s like a Rocky movie, but this is a golden opportunity for me to cause a huge upset and add my name to the list of burgeoning British world champions. It’s a massive ask, I’m in with a class fighter in Chudinov who went to Sturm’s backyard and well beat him. I know what I’ve got to do and I now I’ve got go away and train to beat him,” said Buglioni.