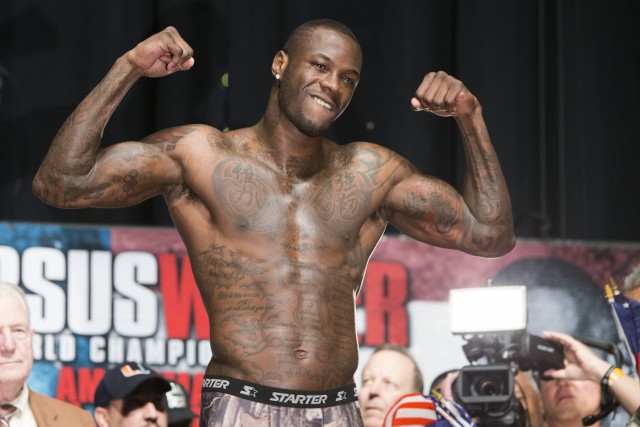 Declan Warrington speaks to Wilder ahead of his WBC title challenge

THERE’S an irony in the belief that the demise of America’s heavyweight scene is attributed to a preference for more lucrative sports when their latest ‘saviour’, Deontay Wilder, shunned basketball for boxing in the pursuit of money.

If, as many expect, “The Bronze Bomber” overcomes WBC champion Bermane Stiverne when they meet at the MGM Grand on the 17th, he will, of course, have taken a significant step towards justifying that pressure-laden label, as well as his decision to leave the basketball court for the boxing ring.

To be a true ‘saviour’, however, Wilder will be required to excite and reign as the world heavyweight champion for years – not mere months, like the last American-born champion Shannon Briggs briefly did until June 2007 – and to do so he will need more than just the exceptional power he possesses, not least a superior skill set than he has so far had to demonstrate.

Stiverne could yet expose Wilder as little more than the latest Seth Mitchell – fundamentally limited and overhyped – but as the last American fighter to succeed at the Olympics when winning a bronze medal at Beijing 2008, and in doing so after only 21 amateur fights, there remains reason to have faith in his natural talent and potential.

If not combined with the work ethic only true hunger can inspire, talent will ultimately only carry a fighter so far, so it is relevant that Wilder’s desire to earn was inspired by his daughter being diagnosed with spinal bifida – a condition in which a problem with the development of a spine and spinal cord leaves a gap in the spine – and not by riches for riches’ sake. Opportunities to pursue college basketball and American football were declined when Naieya Wilder’s birth, and her needs, altered a young Deontay’s ambitions and forced him to combine jobs as a chef and delivery driver.

“Football and basketball were my true loves, my first love,” he told Boxing News. “Until I had my daughter – at 19, I was in college – she was born with a spinal disorder, that’s how I got into boxing [at 21].

“After I had her I dropped out of college. I felt like she was my sport now, so I gotta support her. I had one guy in college, who knew what I was gonna do, but before doing it I told him I should start boxing. He said he thought it was a great idea because he remembers me fighting on the streets, when I had quick hands in the street bars.

“But I was ignorant to the sport then, I felt like every fighter that stepped in the ring made a lot of money [Wilder’s original plan was to be a journeyman]. At that time boxing was a way to make money to support my daughter because I didn’t know anything about the disorder she had. I didn’t know how much money it was gonna take to take care of her.

“When I went into the gym it was like ‘Wow’. I’ve never seen anything like it, it was like the ‘Hallelujah’ music [which Wilder then sings]. It sounded so nice to me when I walked into that gym: the speed bags, the heavy bags. Have you ever been at a point in time when you knew you was in the right place, at the right point in time? That’s how I felt. Like, ‘This is it, this is my last chance to be a famous athlete’.”

Wilder, his manager Al Haymon and his trainer Jay Deas will no doubt hope that the right place at the right time is Las Vegas on January 17, in the same way the Sin City once was for Mike Tyson, Larry Holmes, Muhammad Ali and other heavyweight greats in the era the Americans reigned unrivalled, and unlike it was when Wilder was charged with “domestic abuse by strangulation” following an incident with a female in May 2013.

“Everything that was against me was dropped,” said 6ft 7ins Wilder, 29. “And nothing was filed on my behalf. It’s a thing: I despise a thief, and I felt like at that point in time I was being took advantage of with a thief and some things happen that probably could have been in a different manner but it wasn’t near as bad as what the media put it out to be. Both parties have moved on, and we good.

“Of course I regret that I had to go through that at that time. One particular fight that I wanted that didn’t happen because of that situation is the [Dereck] Chisora-me fight. I always think about that fight.”

The female concerned was among a group Wilder knew from Alabama. Growing up in a state with a deeply racist past left an impression on the Olympian. “For me, racism is everywhere,” Wilder explains. “The only thing about the [US’s] south and racism is that in the south people are more open to being who they are. If you go up north there’s racism up there but people are more hidden, they’re more closed, they try to hide their racist beliefs.

“In the south, they’re more open to it. I’d rather have somebody that’s open about it than have someone that’s racist behind closed doors, than when they’re outside when they’re among you, to fake it, to put that mask on.

“But Alabama’s a great place. Of course you have your parts where people may be racist here and there, but when it comes down to a tragic moment or time, maybe say a tornado, everybody comes together, everybody keeps together man, and that’s what I love about Alabama. It’s a nice place to raise a family, man.”

Given Wilder repeatedly speaks of being inspired by those who doubt his talents, of his desire to “hurt” Stiverne and that he allowed a video of him repeatedly punching – under the guise of sparring – “Twitter troll” Charlie Zelenoff to be posted online (something he wouldn’t discuss through not wanting to “give him any more attention” (Zelenoff had mocked Wilder’s daughter’s condition)) there is little reason to suspect he is simply being diplomatic.

An unmistakable, deep conviction laces the words that leave his mouth every bit as much as it influences his punches in the ring, so though Wilder – in 32 professional victories, all by knockout – has yet to go beyond four rounds, his belief about what lies in his future after defeating Stiverne can’t be dismissed in the same way as so much of the empty rhetoric indulged in by so many of boxing’s figures.

“I definitely wanna change this temple of heavyweight boxing back to how it once was.

“I had it planned out that I wanted to beat Stiverne, fight my mandatory – Bryant Jennings – then I wanted to maybe fight [Tyson] Fury, or do a voluntary, then fight Fury, then fight [Wladimir] Klitschko. He still gotta keep winning as well but in my perfect world that’s how I want it to go.

Praising Wilder’s power and speed, Klitschko has already discussed a potential fight with the American – suggesting he is another who believes Wilder beats Stiverne – and one in which an enticing clash of philosophies would heavily feature; the seasoned graduate, the patient and disciplined 12-round fighter with a proven record of dismissing heavyweight pretenders, against the raw college dropout; the fierce, as-yet-unproven enigma.

“I’m not tryna prove to the world I can take a punch, that’s nothing,” said Wilder, who denied rumours that he knocked out David Haye while the two sparred in 2013. “For me to have a scrambled brain and a slurring in my talk, I’m not interested in that, I’m a let people keep thinking and guessing, ‘Do I have a chin? Can I take a punch?’ Keep thinking. Because anybody who gonna hit me, they gonna earn it.

“I definitely believe I can beat him [Klitschko]. There’s no fighter in the world that I feel I can’t beat. That’s just the confidence I have.

“Twelve rounds is nothing. I wish we could go back to fifteen, that is a challenge. Twenty rounds, now you’re talking about something. Twelve rounds is like an appetiser to a five-course meal.

“Whether I make myself sound good or not, there’s gonna be a point in time when I’m a have to prove that. If I don’t live up to what I’m saying, I’m just speaking bullshit, right? When I prove myself, then people gonna be like ‘Hey, he was telling us a long time ago’. So I don’t want it to be a surprise for people.

“People say ‘He gotta fight someone that hit back’. Well what the hell do they think they been trying to do? I’m not gonna just let people hit me.

“When someone earns that, to hit me, then they’ll see.

DON’T MISS THIS WEEK’S BOXING NEWS FOR THE FULL BREAKDOWN OF THE BERMANE STIVERNE-DEONTAY WILDER CLASH.