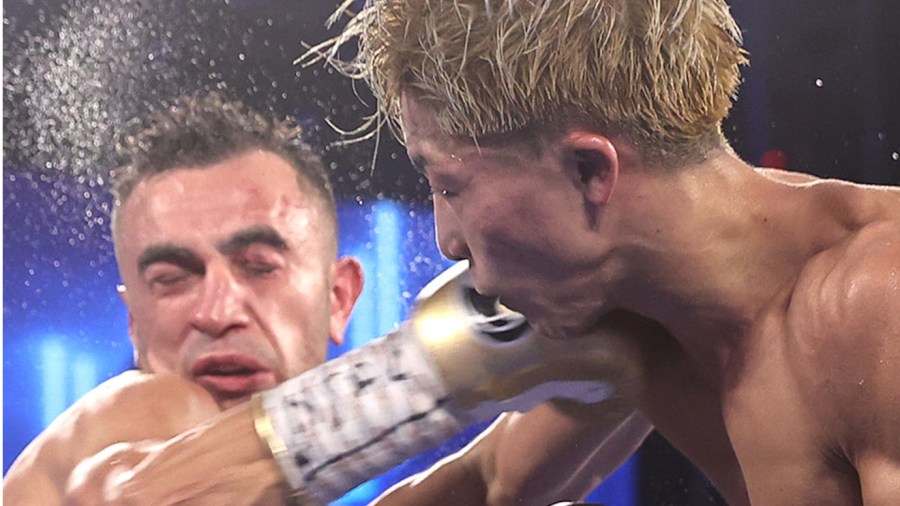 As Japan's terrifying bantamweight champion Naoya Inoue adds yet another victim to his list of KO wins, Elliot Worsell takes a look at five potential opponents for the 'Monster'

That seemed an inevitable conclusion only once it became a reality and it was perhaps all the more shocking because the last time the two had met they had been so perfectly matched. Back then, in November 2019, Inoue had been forced by Donaire to go the full 12 rounds for the second time as a pro and had, in the process of being pushed harder by the Filipino than anyone before or since, lost both exchanges and rounds.

This time, however, with Donaire three years older and Inoue three years better, the rematch was a markedly different proposition. This time, as early as round one, Inoue found his range to devastating effect, dropping Donaire towards the end of the round with what Donaire would later describe as the hardest shot he had ever received as a pro. At that point, the writing was on the wall. Donaire, struggling to make it to the bell, (which, thankfully for him, was just around the corner), was now fighting purely on instinct and was, in round two, eventually finished by Inoue in vicious style.

That brought a premature end to both the fight and the rivalry. It also had Donaire wondering what he could have done differently and many others wondering, with Donaire now consigned to Inoue’s past, who has the ability to come along and tame Inoue at a time when he appears to be gathering more and more momentum and producing more in the way of fear.

Indeed, as times goes on, and as Inoue’s title defences rack up, it is becoming harder and harder to see someone match Donaire’s performance against Inoue in 2019, never mind actually get the better of him and blemish the Japanese star’s unbeaten record. He looks, for now, too strong, too fast, and too powerful for the men in and around him. Scarier than that, he also looks to be improving, growing, and maturing. He looks, at the age of 29, to be entering his athletic prime, a prime his rivals pray will be short.

There will, of course, likely come a time when Inoue meets his match, both physically and stylistically, and we will know then that he is human. But until that day arrives we must wait with patience and we must watch with awe as he tiptoes the line between fighting opponents capable of enhancing his legacy and avoiding the ones who could do irreparable damage to it.

Admittedly, there is a sense that those kinds of opponents are few and far between. However, there are five men out there – ranging from super-flyweight to super-bantamweight – who could at least offer Inoue, 23-0 (20), something he hasn’t seen before, be it a fresh style, a size issue, or even just a belt he hasn’t yet won. And these five are as follows:

Mexico’s Estrada was last seen outpointing Román González in March 2021 to win the second of the pair’s two encounters (the first, which took place in 2012, was won by González). A wonderful fighter, blessed with both aggression and acumen, Estrada has lost to only González and Srisaket Sor Rungvisai, in 2014, and has reigned as light-flyweight champion, flyweight champion and super-flyweight champion.

At 32, and with plenty of miles on the clock, it might be too much of an ask to expect Estrada to confront Inoue at a fourth weight – bantamweight – but he certainly has the quality to do it and, moreover, has in recent years registered some of his best wins, including one against Carlos Cuadras (TKO 11) in 2020.

In terms of risk, there is perhaps no greater one for Inoue right now than moving to super-bantamweight to fight American Stephen Fulton, an unlikely rival who only recently emerged at the top of his own weight class. It would be a risk for Inoue because it would require him stepping up in weight to fight a man of 5’7 (to Inoue’s 5’5) and also because Fulton, still a relative unknown, lacks some of the allure of other prospective Inoue opponents. To beat him would be a fine achievement, no doubt, and would really elevate Inoue’s legacy, yet Fulton, for all his talent, only became WBO super-bantamweight champion in 2020 (when outpointing Angelo Leo). He has since added Brandon Figueroa’s WBC title to that, as well as outboxed Daniel Roman, another former world champion, but one could argue Fulton’s risk is not worth the eventual reward for Inoue. Regardless of that, should Inoue see his future at super-bantamweight, Fulton, for now, is very much the man to beat.

The most decorated of all the fighters in the vicinity of Inoue, Nicaraguan legend Román González is at this point so beloved it would be almost a shame to see him share a ring with a monster in his athletic prime like Inoue. That’s not to say González would find himself overpowered or outmatched, of course (we’ve all made that mistake before), but it would certainly be a fight in which the odds would be stacked against him; a fight requiring a superhuman effort perhaps even beyond González at this stage of his brilliant career.

Still, as it stands, González, despite the fact he is now 34, remains at the very top of his game and earlier this year took Mexican upstart Julio Cesar Martinez to school for 12 rounds. He is, if not quite at his peak, close enough to it to still be a danger and, furthermore, has managed to maintain the kind of skills, poise and composure unmatched by anyone in the lower weight divisions.

If the fight is actually made between Butler and Inoue, few will be picking the Liverpudlian to win, of that there is little doubt, yet that doesn’t mean he is undeserving, nor does it mean the fight won’t happen. In fact, with a WBO bantamweight title to his name, and with John Riel Casimero now in his rear-view mirror, Butler has never been better positioned than he is right now to land a shot against Inoue, the biggest star he could possibly fight. He has, after all, the one belt Inoue currently lacks and he also has popularity in the United Kingdom, a territory one can be sure Inoue is still keen to conquer, particularly in light of his stunning British debut in 2019, when he knocked out Emmanuel Rodríguez in two rounds.

“If I fight Inoue next, I’m stepping in with an absolute legend,” Butler told me last month. “He’s someone who is going to go on and win many, many more world titles at numerous weights. He’s magnificent.

“I watched him live at The Hydro (Glasgow) against (Emmanuel) Rodríguez and thought Rodríguez had a really good first round. I was expecting it to be a competitive fight, but then Inoue came out for the second and as soon as he caught Rodríguez clean that was pretty much it. He’s just so destructive. He’s a very smart fighter, too. He’s someone I enjoy watching as a fan even though he’s in my weight category.”

Though spoken about for some time now, the thought of Casimero getting the chance to share a ring with Inoue in 2022 has never seemed less appealing than it is today. Sadly, whereas it was once a fascinating battle between bantamweight belt-holders, the Inoue vs Casimero fight now carries with it one less title and considerably more baggage, albeit through no fault of Inoue. In fact, blame should be placed solely at the feet of Casimero, whose inability to defend his WBO bantamweight title against Paul Butler in either 2021 or 2022 led to the Filipino eventually being stripped of the title in May of this year. This left Casimero without a belt and therefore without his ticket to a future fight with Inoue. It also left many believing Casimero, whose issues apparently stem from an inability to make bantamweight, would inevitably cut his losses and find himself campaigning as a super-bantamweight. That remains to be seen but, as of now, far more likely is a move up in weight for Casimero than a fight at bantamweight against Naoya Inoue.