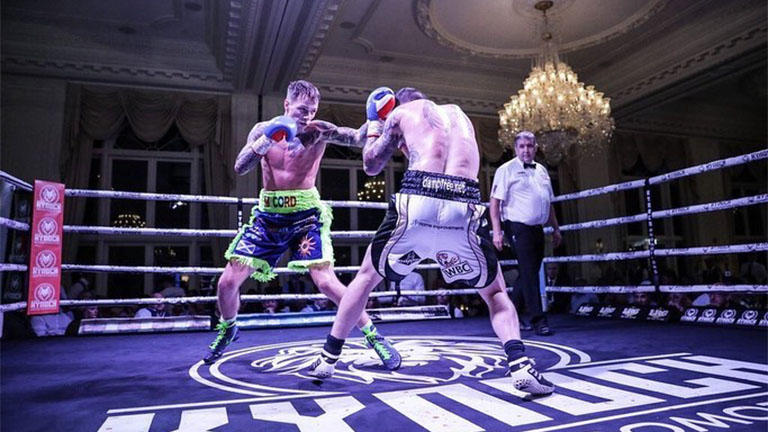 WITH Livingston’s Thomas Dickson withdrawing due to illness just 48 hours beforehand it was a case of all change in the bill-topper of this Sam Kynoch promotion in the ornate Donald J Trump Ballroom at Turnberry.

No longer was Ayr’s unbeaten Calvin McCord defending his Scottish Area lightweight title. Instead his opponent came from south of the border as Birmingham’s experienced former English super-bantamweight champ “Showtime” Sean Davis, already in the gym and preparing for a fight, stepped in at the 11th hour to trade punches over eight rounds.

Not ideal by any means for Calvin, though looking on the positive side this was a great learning fight – and having banked eight good rounds it was his arm that was raised at the finish, the score reading 77-75 in his favour.

There was southpaw success over eight rounds too for Dundee’s Scottish Area super-welterweight champion Paul Kean, who though not having things all his own way was adjudged the 78-74 winner at the conclusion of his contest against Eltham’s unbeaten Ohio kain Iremiren.

Dumfries super-middle Trigger Wood and super-flyweight Neil McCubbin from the small village of Drongan both maintained their 100 per cent records, neither of them dropping a round in respective sixes against Atherton’s gritty William Warburton and Middleton southpaw Steven Maguire, a tryer who is better than his poor record might suggest.

Both opponents had boxed the previous weekend where they also succumbed on points over six, so it was a case of deja vu with Warburton, in his 191st contest, losing out 60-54 and Maguire sharing a couple of sessions in a contest that finished 60-56.

There was a first pro outing for Arran McGarvie, who hails from Dailly in South Ayrshire. He went in over four with 29-year-old Hull stalwart Luke Fash over four and celebrated after banking victory number one, the card reading 40-36 at the end of 12 minutes.

The Verdict Calvin’s title defence will have to wait but eight hard rounds will have done him no harm.