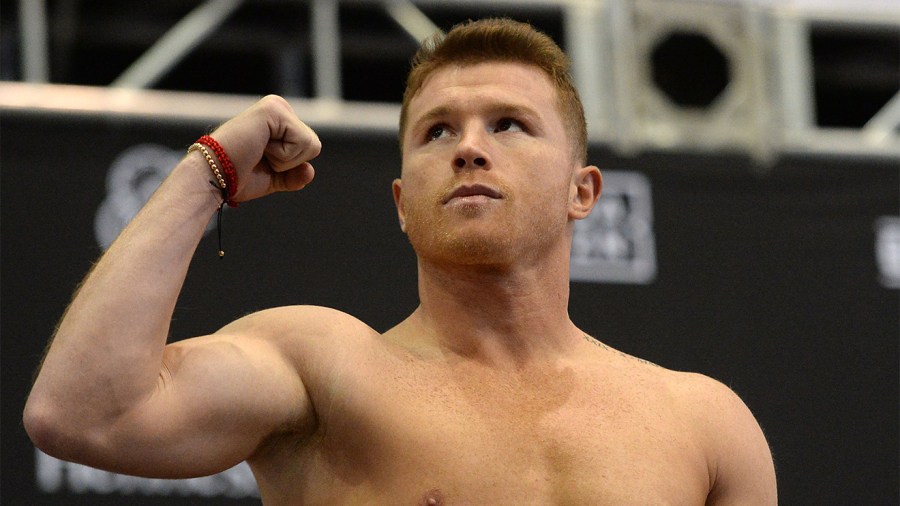 Two British fighters are in line to get the ‘golden ticket,’ a shot at Canelo Alvarez in the US or Mexico in May, writes John Dennen

BRITAIN has two super-middleweight world champions, both waiting to see if they will get the “golden ticket,” a shot at Canelo Alvarez in America or Mexico this May.

Alvarez recently won the WBO light-heavyweight crown, when he knocked out Sergey Kovalev in November. But he has now vacated that belt and is likely to compete next at super-middleweight, the division where Liverpool’s Callum Smith holds the WBA title and Hatfield’s Billy Joe Saunders has the WBO belt.

“We’ll just have to wait and see,” Joe Gallagher, the trainer and manager of Callum Smith, tells Boxing News. “It’s like being Charlie at the Chocolate Factory waiting for the golden ticket, to go to Las Vegas or Mexico, because that was a venue that Eddy Reynoso [Canelo’s trainer] mentioned. It possibly could be Mexico in May.”

Gallagher met Reynoso in December in Arizona and discussed the possibility of Smith taking on Alvarez. “I managed to grab him, sit down and we had a good conversation. I spoke to him about the opponents that were in the frame: [WBO middleweight champion Demetrius] Andrade, Billy Joe Saunders, Callum and then we sat and we had a good chat. At the end of the meeting he said to me Callum Smith was the kid that he wants to be in the opposite corner to Canelo in May this year. We shook hands on it, I had to go away over the festive period, he had got to speak to Canelo over the holidays, tell him that Callum’s the man,” Gallagher said.

“Now things can change from him saying this to something else. Obviously Billy Joe’s in the frame, I think it’s going to be down between the two of them. If Billy Joe gets it, brilliant, brilliant for British boxing, I wish him and Ben Davison [Saunders’ trainer] the best of luck, great for them over there. If Callum gets it, it will be great for Callum as well.”

Gallagher did tell Canelo’s team that after the window to make a fight for this May closes, Smith will have to move to light-heavyweight. He won’t be available to box at 168lbs by September of this year. Joe added. “You can’t accuse Canelo of ducking Callum Smith, that’s outrageous, Canelo’s the pound-for-pound number one, he’s a thrill seeker, he likes fast cars, wild horses, he isn’t going to duck Callum Smith. I think it’s down to financial reasons.”

Gallagher has been in the opposite corner to Alvarez before, with one of Callum’s elder brothers, Liam Smith. The trainer is adamant that they learned plenty from that experience. “I don’t think you realise how good Canelo is until you’re up there up close and personal with him,” he says. “Callum Smith will give Canelo a very good fight. He’ll give him problems. Styles make fights and that’s a huge fight.”

“He [Callum Smith] is the number one, he’s the 168lbs world champion,” Joe continued. “We’d be hugely confident of winning the fight.

“With Callum, Canelo would most probably slip [inside] the long arms, similar to Kovalev. Callum’s inside game is good. I think it’s just an exciting fight. I think they’re two fighters that will meet head on.”

He believes that Billy Joe Saunders will be a difficult challenge for Alvarez too, but make for a different type of fight. “I think apart from James Kirkland, Canelo has had trouble with southpaws, [like Erislandy] Lara, [Austin] Trout. I think he has problems with them and close decisions. I think Billy Joe, his movement, his side to side movement, his timing, could cause Canelo problems for a certain while. It’s how long Billy Joe can keep Canelo off him. [Canelo’s] timing, his generalship, is a level above David Lemieux, who he beat, levels above. So it’s being able to contain Canelo,” Gallagher said. “If Ben and Billy Joe get it, then good luck to the pair of them.”

They will all however just however have to wait and see. “Canelo’s become the Floyd Mayweather of boxing. He’s the star. What he says you do, to an extent. Whether it was in Las Vegas or in Mexico we’d have no problem taking them fights. We just want the opportunity,” Gallagher continued. “All we know is it’s between Callum and Billy Joe. It would be great for British boxing. We’ve got two world champions at super-middleweight in position to fight the pound-for-pound number one in the world, so whoever gets it fair play to them.”

If Alvarez does fight Billy Joe Saunders instead, options become somewhat thinner on the ground for Smith. Caleb Plant and David Benavidez, the other world champions at 168lbs, have rival promotional affiliations. Danny Jacobs could be a richly appealing fight for Smith at super-middleweight. “Obviously if Billy Joe gets a fight with Canelo, for Callum it puts him out in the wilderness a little bit. The Benavidez and Plant fights, they won’t happen, because they’re on the other side of the street as you see with [Terence] Crawford and [Errol] Spence, so they won’t happen. Callum then does he fight Jacobs? Does he step up and fight Gilberto Ramirez? Does he go and fight [Artur] Beterbiev? Does he move up in weight?” Gallagher pondered.

“If we’re not getting Canelo we want to be out in America and fight in April. We want to be out there. We just dealt with our mandatory, let’s go out there and have a fight and see what happens in the summer time.  If we don’t get Canelo or anything else, we might revisit John Ryder. You just never know.

“The 175lbs division looks a very good option for us at the moment, especially with that vacant WBO belt and a possible fight against Gilberto Ramirez, that’s a good opportunity for Callum Smith as well.”