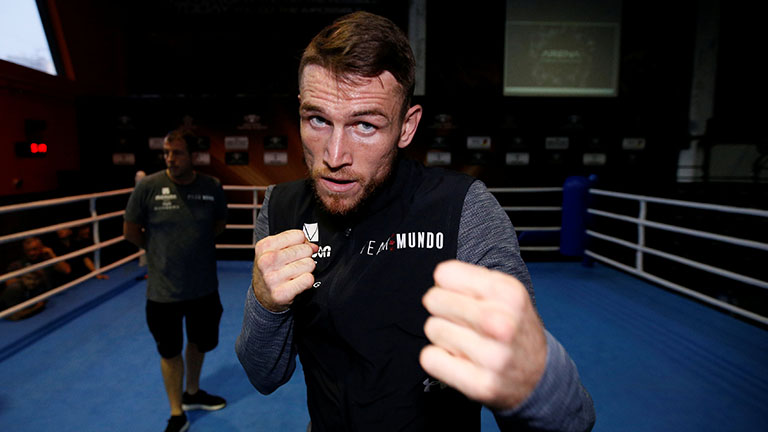 Even though Saunders, 28-0 (13), has joined forces with Eddie Hearn and Matchroom Boxing, also Smith’s promoter, all the immediate talk is of Saunders, the WBO super-middleweight champion, one day fighting Gennady Golovkin and Saul ‘Canelo’ Alvarez, the two undisputed money-making stars of the sport.

Fellow Brit Smith, the WBA champion at 168 pounds, should be the more realistic target for Saunders at this point, but, bizarrely, the pair’s shared nationality could end up being more of a curse than a blessing – at least in the short term.

“Callum’s open to all the unification fights,” Smith’s coach Joe Gallagher told Boxing News. “He wants to win the belts and have the big fights. With Billy Joe moving to Matchroom today, hopefully that can now happen. I can’t see it happening this year, though.

“I think everyone will agree, and Eddie has more or less said, that it’s a big outdoors fight next year. We have a small window to make outdoors fights in this country and unfortunately now we’re going into the autumn so there’s no chance it happens this year.

“It will most probably happen in April or May time next year so long as both stay undefeated.”

For as long as Smith remains a super-middleweight, it’s hard to see too many potential threats to his 26-fight unbeaten record. However, his ambition, as well as a desire to capitalise on recent good form, could soon see him make the move to light-heavyweight, at which point the ground becomes a little shakier.

“I think you look at the super-middleweights at the moment and, with the potential for some to move up, this time next year the light-heavyweight division will be the hottest in world boxing,” said Gallagher. “You’ve seen (Gilberto) Ramirez move up and you’ve got (David) Benavidez, (Anthony) Dirrell, Callum Smith. They will all eventually go up to that division and I think the division is going to be red hot next year.

“Callum’s looking for defining fights now, but it’s very problematic to do unification fights at super-middleweight. PBC (Premier Boxing Champions) have got their WBC belt over there, and the IBF, while the WBO was obviously with BT and Frank (Warren), but now it’s over here.

“It’s been very hard to make those fights, especially when TV companies put rankings out and don’t even acknowledge the other world champions, instead making out they don’t exist. It’s really hard.

“I think the reason Callum will go up is because he will think, I’m number one at super-middleweight, I’ve done it all there, and I’m moving up for a new adventure at light-heavyweight.

“If you look at them, most of the light-heavyweights belong to Bob Arum and ESPN. There’s a relationship there that could work, and Callum could get those big fights. You’ve got the winner of (Sergey) Kovalev and (Anthony) Yarde, you’ve got (Dmitry) Bivol and you’ve got Gilberto Ramirez. There’s a lot going on in that division.”

Closer to home Callum Smith has Billy Joe Saunders. And they’re closer today than they have ever been – or so you’d think.