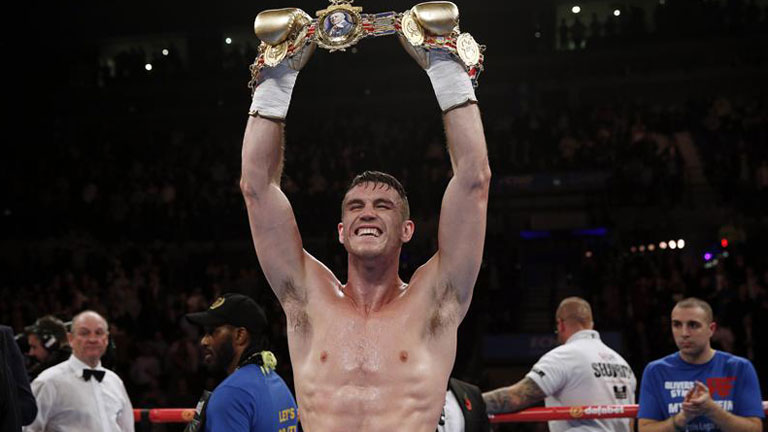 CALLUM SMITH’S next fight, a European super-middleweight title challenge against Hadillah Mohoumadi at the Echo Arena in Liverpool on April 2, will be a final eliminator for Badou Jack’s WBC title.

“I don’t think it’ll be my next one, to be honest with you, because I think [Jack] is due a voluntary pretty soon, I’ve heard rumours he’s going to fight around April. Once he gets that out the way [it’ll happen]. I don’t know how the WBC work, whether because he beat [George] Groves as a mandatory then he’ll have a voluntary now and I don’t know whether they automatically put another mandatory on you,” Smith told Boxing News. “Some organisations are different. I’ll have to wait and see but as long as I win this fight, sooner or later I will get my shot. Whether it’s next or in a few fights doesn’t really affect me, I’m in no rush. I’m only 25, the longer the better, the more learning I’ll do but I believe given the chance now, I could beat Badou Jack. If it’s after this one then so be it, but if it’s a couple of fights down the line then it’s even better for me.”

George Groves has insisted that Smith should fight him before getting his tilt at the champion. But Callum reflected, “George Groves is a good fight, I’m not denying that. But I think he contradicts himself. The fight was talked about a year ago when I was number three with the WBC and he was number one and they said it didn’t make sense for him because he was number one and he had his route planned out to Badou Jack. It’s the same now. I’ve got a final eliminator, if I win that, I’m mandatory. So he’s not really in my plans but he feels like I should fight him. It’s the exact same situation but flipped around. He feels like I should fight him when a year ago he didn’t feel he had to fight me. He is a big name. He is a good fighter so it isn’t a fight that I’d turn down. I do think it will happen but my next fight’s planned and if I win that then I’m next in line for Badou Jack.

“I think the thing with Groves, he just feels because he’s George Groves he automatically deserves a shot at the title. But he’s had three and lost them so I feel he should go and get a few wins. He’s had one win. Although he looked good, the opponent was quite poor so I do think he needs to beat someone of note and maybe have another final eliminator or beat a decent name and earn another shot. I’m not denying that he belongs at that level but just because he’s George Groves he shouldn’t automatically warrant another shot at a title.”

“My aim is just to win a world title. I don’t care who I have to beat to get it. If they were to say I was to fight George Groves in a final eliminator before this one, I would have taken it. I want to get to where I want to be. But ideally if I’ve got a world title, the best people to defend against are Brits. We’ve seen with Froch-Groves and Quigg-Frampton domestic fights are a lot bigger especially with a world title on the line. I could fight Groves, James DeGale or Martin Murray once I’m world champion, it’s only going to be good for myself personally and good for the division and British boxing,” Smith said.

“That [revenge] would be an added bonus. Arthur Abraham’s a world champion so I’d love to have a fight with him, same with James DeGale, he’s a world champion and at the minute I believe he’s probably the best in the division so that is a fight I’d want in the future.

“I think every boxer’s dream is to become a world champion and I believe I’m in touching distance now. The WBC’s the route I have the ranking in so that’s the one I’ll go but hopefully I can win that, then I’d like to fight other champions as well. I believe I can become the best super-middleweight in the world. Winning the world title doesn’t guarantee that. So if I was to win a world title I’d like to fight some of the other champions to see who’s the actual number one in the division.”