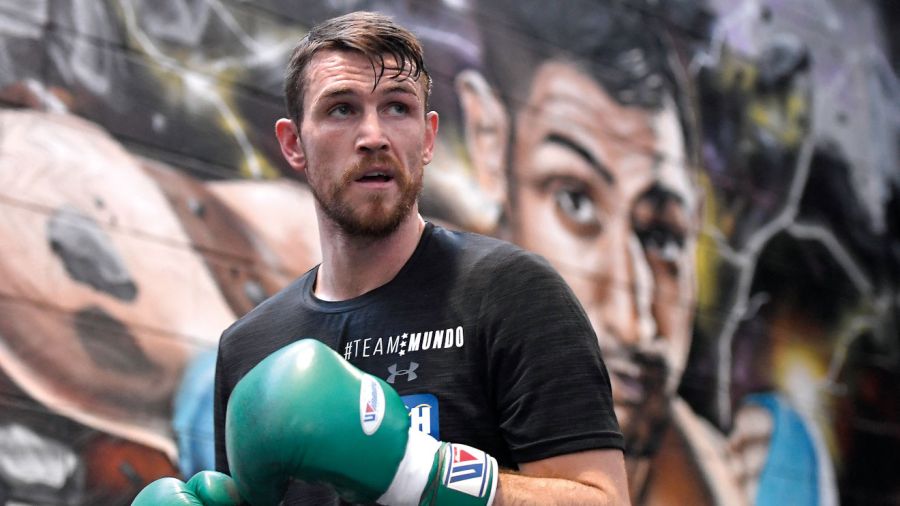 CALLUM SMITH is waiting. He had been holding out hope for a clash with Canelo Alvarez. But the Mexican star was heading in another direction before the global lockdown shut down the sport. After a closer-than-expected WBA super-middleweight title defence against John Ryder, Smith had been eager to box early in 2020. “I still believe I’m the best super-middleweight in the world. The rankings still have me as number one. A bad performance doesn’t take that away from me. I believe I’ll beat whoever I need to beat to prove myself as the number one in the division. I think I’ve shown whether I perform or don’t perform, I’ll always do enough to win,” Callum told Boxing News.

It could have led him to that showdown with Alvarez. “I was thinking if I’m ever going to get the Canelo fight, it’ll be now after that last performance,” Smith observed. “I do think stylistically I’m not ideal for a small super-middleweight moving up from middleweight. I’m not saying he’s avoiding me or he’s scared to fight me. But I do think stylistically I’m not ideal.”

He had been training to be ready to fight on May 2. Those discussions with Canelo however broke down. “I was involved in negotiations for the biggest fight possible for anyone around my weight,” he reflected. “Negotiations aren’t straightforward when you’re at the highest level. That’s part of boxing you’ve got to learn to deal with.

“I’m guessing if that [Canelo-Billy Joe Saunders] fight doesn’t happen it’ll be because he’s agreed to fight ‘GGG’ [Gennady Golovkin]. So I’m not sitting around waiting for that fight again. I’d like to just carry on with my own career. Secure whatever fight I can, the best one possible.”

America’s Danny Jacobs, promoted by Matchroom like Smith, is a likely target for the Liverpudlian. “A fight with him, if I can’t get one of the other champions, is probably the fight that makes the most sense for me,” Smith said. “If Billy Joe fights Canelo, then there’s Caleb Plant, IBF champion, David Benavidez, WBC champion. Danny Jacobs has just stepped up and beat Chavez. He’s a big name, a huge name in the States. He’s a good fighter, someone I do rate.

“I feel I’m the best in the world and I believe I can cement that by beating some of the bigger names out there and Danny Jacobs definitely is one.”

It is unclear how future boxing events will be staged in a world blighted by the coronavirus pandemic. But it’s plausible that it will come back in different states in America at different times. Smith is perfectly prepared to travel for the Jacobs fight. “I’m not one of these who’s hell bent on home advantage, I will go to the States. I believe I’ll perform wherever the fight is,” he said.

He points out, “I don’t need Canelo Alvarez to be involved in big fights.” Light-heavyweight, as well as super-middle, is stacked with world-class potential opponents. “[Dmitry] Bivol’s another good fighter, I boxed him in the amateurs. He’s a good fighter. There’s a lot of good ones who aren’t champions, Marcus Browne, Badou Jack. There’s a lot of good names there,” Smith said.

When Smith was an amateur welterweight, he was in camp in Russia with Artur Beterbiev, now the unified WBC and IBF light-heavyweight champion. “He dropped a couple in sparring. We kind of knew that before going over there he was heavy-handed and he proved it while we were over there. I’ve seen a lot of his fights, he’s put a load away and he continued to do it in the pros,” Smith said.

Smith was training alongside gym-mate Callum Johnson ahead of the latter’s gallant world title loss to Beterbiev. “Tactically I thought him and Joe [Gallagher, their trainer] got it spot on,” Smith said. “[Beterbiev] is a little vulnerable himself. He can be hurt, he’s not invincible.

“He can be hurt but he can certainly hurt his opponents.

“I do believe I’m good enough and big enough to compete at world level and win a world title at 175lbs. I’ve always said it’s inevitable at some point. [But] I’ve always said I’d like to achieve as much as I can at 168lbs before making the jump up.”