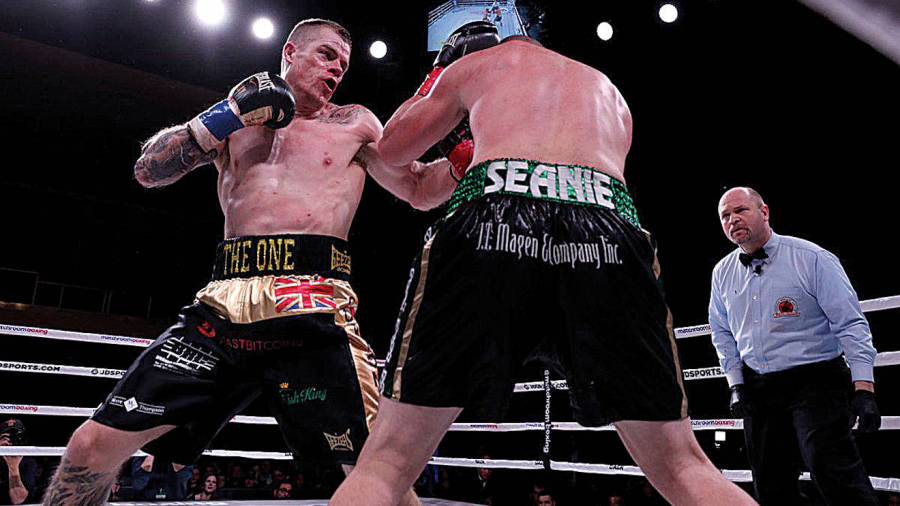 Ahead of a comeback, after a long time out, with a new promoter, Callum Johnson spoke to John Dennen

CALLUM JOHNSON has been out of action for too long. In his last two fights he has clashed with Artur Beterbiev for the IBF title and knocked out Sean Monaghan. Then the opportunities dried up. He hasn’t fought since March of 2019. But now he is coming back and looking to serve a reminder that he is still the best light-heavyweight in Britain.

The long wait for a return had been hard. “It’s been frustrating, it’s been really frustrating. To be honest there were times through it where I was doubting. Is it really worth it? Is it ever going to happen again for me? Obviously you go through those moments but all I’ve done was just as soon as them thoughts came in my head I just sort of pushed them out and cracked on with what I was doing, getting myself fit and ready for when something did come,” he explained. “I always knew something would come, somehow, some way something would come up for me. I had two choices. I could have sat on the settee, got fat, got out of shape and then had a massive, massive mountain to climb. I thought I’m not going to do that. I’m going to stay active. I was always expecting something to pop up out of the blue anyway. It never did.

“If you look at my last three fights, you got Frank Buglioni, I won the British and Commonwealth, then I went and fought Beterbiev, okay I got beat but it was a great fight while it lasted. Then I went back to America and put in a great performance and took out Seanie Monaghan. After that you’re thinking I’m going to get some opportunities now, I’ve cemented my place as one of the top fighters out there and I’ll get some good fights. I don’t know, it’s just weird really, weird the way it happened.

“But at the same time we are professional athletes and we have to keep ourselves alright. Luckily for me I did do that so when the opportunity came I was ready to go into camp anyway.”

Getting that fight date made all the difference. “Last year especially I was so focused anyway in my training. I was always training hard. It made a difference mentally. There was a relief there. It took that weight off my shoulders. That pressure was gone. I finally got the date. I got a new fight contract. I had a plan. Just took the bad thoughts away and made me kind of happy again,” he said.

This bout against Markic will be the first of his new four-fight deal with promoter Frank Warren. “I was never really promoted by Matchroom anyway. I fought under the Matchroom banner but I was never actually a Matchroom fighter. Things weren’t happening there, I saw Frank was doing good things with BT,” Johnson said. “Frank gave us a great offer and it was the right thing to do for me and my career.

“I’ve had a lot of time out of the ring, a lot of inactivity and I just want to make these last few years count and get some good fights.

This bout against Markic the definition of a must-win for the 35-year-old. Defeat would end his career. “It’s not an option. It’s all over if that happens. That’s not really an option. I’m not seeing that as an option,” he says. But he notes, “He’s not a bad opponent. He’s 32-2, he’s got 24 knockouts, he’s held numerous different titles himself in the past. So it’s not like I’m just coming in there with a journeyman for a six, eight-round fight and it’s just a routine job. It’s a fight that I’ve got to be on form for. I can’t take any chances. I’ve got to treat him like he is a world champion. Because at the end of the day if I take it lightly and I slip up, it’s over anyway. I’m taking it very seriously and I’m ready to go and do the business.”

Anthony Yarde and Lyndon Arthur are other light-heavyweight talents that Frank Warren promotes. For Johnson these will be the natural fights to make. “I think it’s inevitable them fights will happen. We’re all with Frank, we’re all on BT Sport, we’re all the best of bunch in Britain. I think they’re the fights that are going to be made and they have to be made really,” he said. “That’s one of the main reasons I like the idea of signing with Frank as well. Frank seems to say things and he seems to do it. You’ve got Lyndon Arthur, you’ve got Anthony Yarde, they’re big, massive fights in Britain. They’re the kind of fights I want to be involved in as well. It’s there. I think the opportunities are going to come.

“I’d love to jump straight in with [new WBO champion] Joe Smith, but obviously that’s probably not going to happen. But if I’ve got to go through Lyndon Arthur or Anthony Yarde to do that then I’m more than willing to do that as well.”

But he insists first his focus has to be on Markic. “There is pressure there,” Johnson said. “Because I’ve got to come back and I’ve got to look good. I’ve got to go put a statement and remind everybody and make everyone go, ‘Oh wow, he’s back.’ And that’s what I’m going to do.”