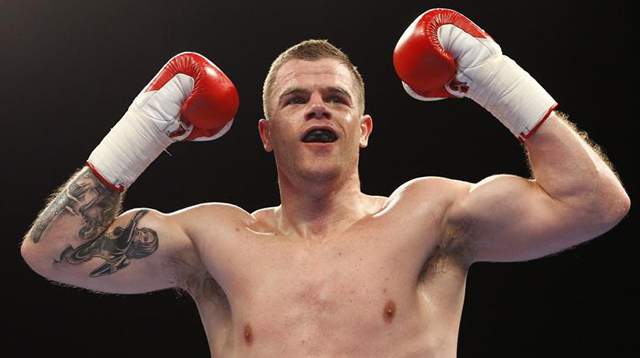 BACK in 2010, Callum Johnson appeared to be on a fast-track to success. Having won the Commonwealth Games gold medal in hugely impressive fashion that year, the man from Boston, Lincolnshire – who represented Scotland at said Games – signed with the legendary Naseem Hamed as his manager and promoter Frank Warren and won his pro debut via stoppage. What followed was immensely frustrating. Johnson fought only twice each in 2011 and 2012 and made just one appearance in the following year. Johnson’s obvious talent was, for whatever reason (he is understandably reluctant to apportion blame), in danger of withering on the vine.
Now, with his trainer Joe Gallagher having taken on managerial duties, Johnson has rebuilt on small-hall shows, with five fights – all wins four inside-schedule – in 10 months and is now ready to step up the quality of his opposition.
“The inactivity was through no fault of my own early on” Johnson insists. “But in the last eight-10 months of my contract with my previous promoter, I’d kinda packed in, I was semi-retired. Joe is trying to get me out in April so I hope to have six fights in a year and make up for lost time. I’m ready for anybody, especially in Britain, I’m ready to take the domestic titles. It’s now in Joe’s hands to get me big fights and on big shows.”
Despite the problems he has encountered, Johnson has not been deterred from once again signing a long-term promotional deal with a major player.
“Possibly if it was a good deal and the right thing to do because I probably need it,” he concedes. “I’m thankful for those five fights on smaller shows but I need a promoter to push me now. People can watch clips of me on YouTube but it’s not the same as being live on TV.”
The light-heavyweight division is far from the deepest in Britain and while the humble Johnson is not taking anything for granted, he believes he has the talent to compete in its upper echelons.
“The top two-three domestically are pretty good and they’d be pretty tough fights,” he admits. “But I’m in the game to prove I’m the best in Britain and I will get that chance. Enzo Maccarinelli is number one at the minute but he’s not getting any younger and it’s time someone was taking his place. I’m not one for calling people out but I fancy all those fights and I think I’ll win them.”