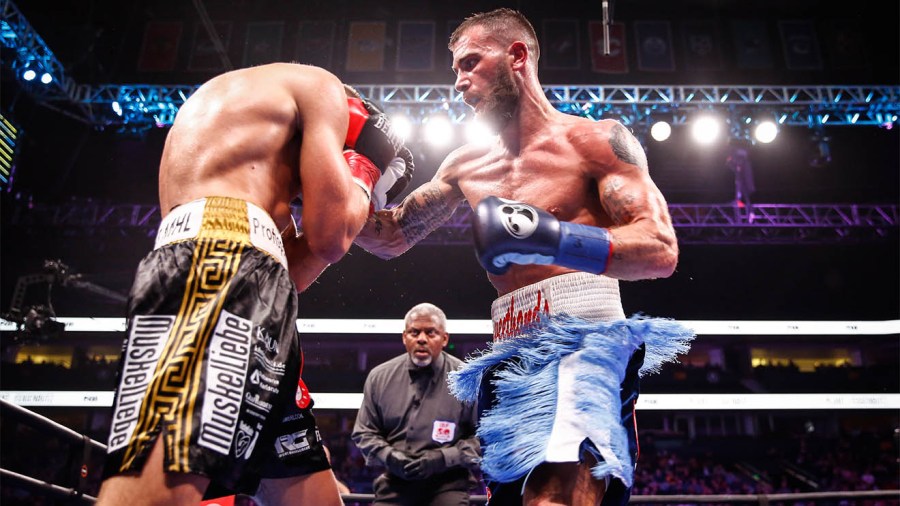 NASHVILLE slickster Caleb Plant calls himself the sport’s greatest super-middleweight, but in order to make that claim a matter of public record, he will need to test himself against men far more formidable than the Vincent Feigenbutzes of the world.

In an energized hometown debut, Plant performed a flawless vivisection of Feigenbutz, pasting the poor, near-anonymous German with fluid, eye-catching combinations all night en route to a 10th-round stoppage win. This was the 27-year-old’s second successful title defence of his IBF belt, since he wrested it from Jose Uzcategui last year in a mild upset.

Postfight, Plant stated that his biggest priority is to unify belts with WBC titleholder David Benavidez. “Everyone knows I want that unification fight with David Benavidez,” Plant said. “You know who the best 168-pounder is. If you want that, you’ve got to come see me. I want that fight; I’ve been asking for it and I’m tired of waiting.”

A win over the young and talented Benavidez would certainly mean something, to say nothing of the other titleholders in the division, including Billy Joe Saunders and Callum Smith. Feigenbutz, after all, was a late starter who skipped out on pursuing an amateur career altogether. His lack of education showed in the ring on Saturday night.

Plant controlled the bout from the opening bell, working behind his jab, before settling into one aesthetically pleasing combination after another that had Feigenbutz tottering around the ring like a pinball. By the fourth round, Plant had displayed every punch in the textbook, including a nifty uppercut that continually split his opponent’s high guard. To his credit, Feigenbutz, bloody-nosed from the second round, flashed something of an iron chin, as he never once went down. But he sure took a beating.

The signature moment of the fight arose in the sixth round, when Feigenbutz went after Plant with a barrage of punches, many of which missed. Afterward, Plant simply shook his head, stuck out his tongue, and blew a reproachful kiss.

On the undercard (TGB Promotions), shades of the infamous ending to the Julio Cesar Chavez-Meldrick Taylor 1990 super lightweight title bout sprang to life when Arizona’s Abel Ramos, down big on the cards, stormed back in the waning seconds of the 10th and final round to score a sensational – and no less controversial – stoppage over Bryant Perrella, who had hitherto been in control of the fight.

With 20-odd seconds remaining, Ramos uncorked an uppercut that immediately put Perrella, of Fort Myers, Florida, on his back. Perrella got up on wobbly legs only to go back down again, courtesy of a right hand.

But just as in Chavez-Taylor, the referee played an outsize and tendentious role. With a second remaining on the clock, referee Jack Reiss asked Perrella to walk to his left. Perrella complied, but he stumbled as he did so, at which point Reiss decided to wave off the bout.

The official time of stoppage was 2-59 of the 10th round.

It was Perrella’s bout to lose. Working behind his southpaw jab, Perrella fought intelligently off the backfoot as he continually circled to his right and mixed in hard left hands and uppercuts. Ramos seemed lost in there, greatly fatigued at one point, but still managed to pull off the monumental stoppage, with some help from Mr. Reiss, of course.

In a battle between southpaw lightweights, the veteran got his hands raised. Working behind a two-fisted attack to the body, Diego Magdaleno bruised his way to a unanimous points decision over 24-year-old hometown favorite Austin Dulay. In the seventh round, Magdaleno dropped Dulay for the lone knockdown in the fight with a body shot. In the same round, he had a point taken away by Mr. Reiss for straying low with a punch.

Judge Benoit Roussel had it 97-91, while Mike Fitzgerald and David Hudson both had it 96-92, all in favor of Magdaleno.

Dulay started sharp, but Magdaleno, last seen getting stopped by lightweight titleholder Teofimo Lopez, got on track in the third round. Dulay had no answer for Magdaleno’s onslaught to the body.