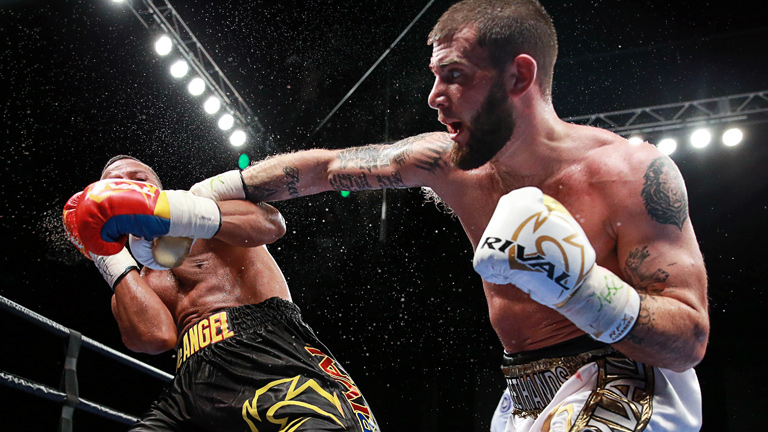 The 24-year-old super middleweight prospect controlled the bout from bell to bell and scored a flash knockdown of De Angel in the fourth round for good measure. All three judges scored the bout 100-89 for Plant.

“It’s another win in the bag,” said Plant. “I had bounce in my legs for all 10 rounds. I was taking my time in there and I feel like I’m getting better each fight.

Plant, a former national golden gloves champion and former kickboxing world champion was well-poised throughout the match. He never seemed flustered nor hurt by anything that De Angel showed him.

The Tennesseean had a comfortable home for his left hook all night, especially in the fourth round when he stunned his opponent near the ropes and then caught him again with a short one that sent De Angel to the canvas.

When De Angel found his feet, Plant took no chances and approached him calmly rather than making attempts to knock out his opponent. Looking back on the fight, some may consider this a missed opportunity for Plant to make the statement he was hoping to make. For better or worse, the conservative route in this sport is rarely as memorable as the brilliant finish.

That said, fundamentally, Plant’s skills were on display, feinting and managing his distance effectively with his stiff jab, being supremely quick on defense and cutting off the ring when necessary.

There was also never a moment during which he seemed even the slightest bit out of balance, surely a product of his kickboxing pedigree.

In the end, it was relatively slow-paced and uneventful first headlining event for Plant who was hoping to make a splash in the super middleweight division, home to his PBC mates, world champions and potential future foes Badou Jack and James DeGale.

“I’ll fight whoever my team has lined up for me,” said Plant with regards to his future. “It feels great to win as a headliner. We’re going to get right back in the gym and get ready for another fight.”

Plant is packing his bags and moving to Las Vegas this week in search of higher-quality sparring opponents. Who would have guessed that there aren’t many of those in Tennessee? It’s a plunge which he hopes will bring him one step closer to an eventual world title opportunity.