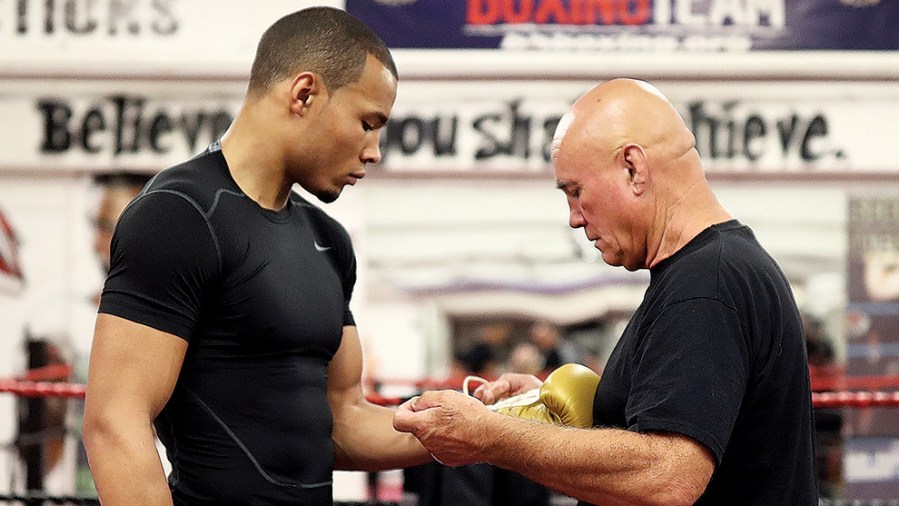 Talking to fighters who are days away from battle is an unpredictable business, writes Steve Bunce

THERE is no masterclass or rule available as a guide for meeting and talking to boxers in the last days before a big fight.

It is best to avoid getting your head chewed off by a bored, weight-drained, starved, anxious man when you ask him how the last five weeks have been. An hour before the Savannah Marshall fight was scrapped, Karriss Artingstall might have just eaten a live swan had one wandered through the hotel lobby.

I have also witnessed Mike Tyson lose it too many times at that same dumb question, at that same dumb time. Josh Taylor in fight week is a classic example of a boxer it is best to avoid. I have no problem with that, actually I prefer it. There are signs, obvious reasons for not asking too much and the ability to read a situation is crucial.

In the gym, under the sea in Hove, Ronnie Davies has been reading fighters for decades. That is what true boxing men can do; they know what is good and bad the moment a fighter lumbers through the door. “He’s good today,” Ronnie told me. He could probably tell at 50 feet.

Chris Eubank Jnr had just arrived in that fancy car that fascinates people. Ronnie knew from his first strides how the day would be. It was close to the end of sparring; it was close to fight time. I knew I was pushing it when I got to the wonderful gym. It is the gym where Ronnie sits in the dark and talks to ghosts – he’s been there 60 years, his father before him. This Eubank camp has been a closed and private camp and that is understandable.

I obviously stepped out during the sparring, wandered a few feet on the sunny front and tried the legendary black spaghetti with crab in Marroccos. Later, Eubank Jnr was terrific, open, honest and grimly determined. Forget the trolling, this version was serious. I was still conscious of a promise to work to an exact time and not outstay my welcome.

Each time I approach a boxer late in their schedule, I think of the wonderful American scribe, AJ Liebling, and his relationship with Floyd Patterson. They had met at the Helsinki Olympic games; Floyd was a teenager and he won gold at middleweight in 1952. So, Liebling had some form and that is crucial.

Liebling had been there through the thick and thin and vulnerable and damaged versions of Floyd. A decade together, bonding at fights and sharing a history. That happens, it can’t be taught.

So, with about 30 hours before Floyd’s third and final fight with Ingemar Johansson in Miami in 1961, Liebling arrives at Floyd’s door. The door to his private house, I should add. The rest of the press pack had been camped in Miami for five or six days. It included a large British contingent; the boys had been loyally following the codes and ethics of our trade. They had been hanging around the gym, propping up the bars and scribbling away. It had been a good week; Patterson’s mix of fragility and power made him good copy. Plus, Cus D’Amato was in town with a headful of conspiracy theories and a mouth full of soundbites. Cassius Clay was also in town and Angelo Dundee was selling the kid. And selling him hard. What a few days it must have been. In June, I had six-days of storms, South Beach, the latest 5th Street gym, beans and rice and Don King in Miami and it was not too bad.

On the afternoon before the fight, Liebling goes to Patterson’s fight house. The champ is sleeping – he was legend at kipping. Liebling waits in the hall, sending one of Patterson’s team up the stairs to wake him. Liebling considers the large white villa, on a nice residential street, “pretentious”. There are golf trophies on the side; there are also sleeping sparring partners on the sofas. It is exactly 33 hours before the first bell and Liebling, the boss scribe, has summoned the heavyweight champion of the world. It tickled me that he had that power to arrive and demand an audience.

Liebling writes: “Patterson, polite beyond the call of courtesy, came down to see me.”

But Floyd is not smiling when he appears and tells Liebling: “The other writers been down here four, five days already, and you just come in at the tail end. No time for talking now.”

Liebling ignores the mildly critical words and writes a beautiful story about the exotic black silk Oriental dressing robe that Floyd was wearing. They also spoke of dreams and ambitions and their friendship. They spoke of glory and sorrow. It was 32 hours to the first bell when Liebling left. They were friends again – I know that feeling. The writer had his story. Bosh.

Here are a few words on Floyd’s first appearance: “He was wearing a silk Oriental dressing robe – orange and black, like a butterfly wing – and under it his back made a blocky rectangle. There were ropes of muscle at the base of his throat – he was a full-scale heavyweight now.” He sounds like a proud father after his son has taken his first steps.

Floyd went back to bed and Liebling went back to the fabulous Fontainebleau hotel on Miami Beach. There was an option to eat and watch Frank Sinatra in La Ronde, one of six places inside the hotel serving food. The city was alive with boxing folk, make no mistake. In the Sixties and Seventies, heavyweight fights often attracted as many as 600 requests from a global newspaper market.

The following night Floyd knocked out Johansson, but was dropped and badly hurt first. It was all part of the Floyd Patterson story. Getting knocked down and getting up. Liebling was witness; a man who understood fighters and fight people. He would have liked Ronnie Davies.

Ronnie was right, by the way. Eubank Jr was good.