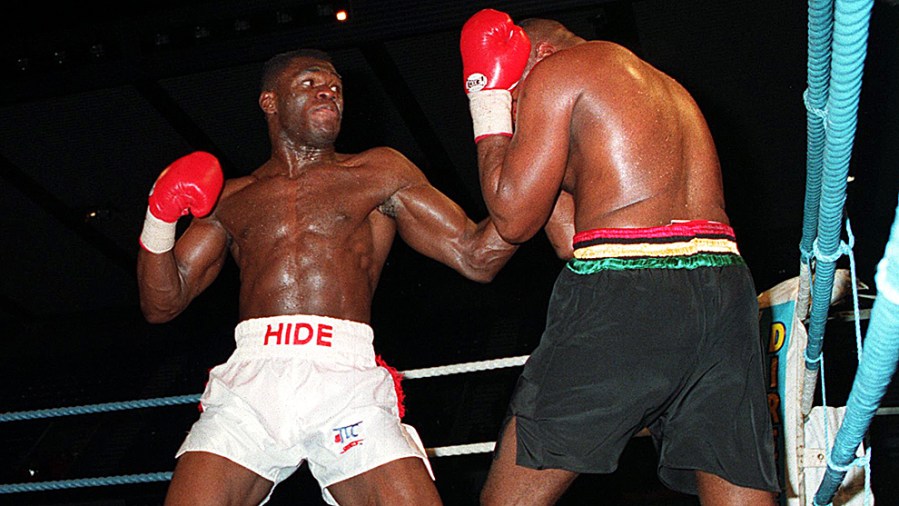 HERBIE HIDE was from another time.

There was a gym once in Camden Town, not far from the modern Camden Boxing gym, where Herbie Hide once stared at a nail for an hour.

It’s a long story with a stop in Las Vegas, the new Den and a courtroom or two.

At the new gym last week, Adam Aziz, was going through the motions of a media day. He was slick, posed wonderfully, smiled and he is still only a baby in boxing years. Once, in Jim McDonnell’s gym just down the road in Camden, a sparring session in front of the media turned ugly and Hide let his punches and senses go after the bell.

At another press conference to announce a world title fight, there was a full-scale fist fight with his opponent. One night at York Hall, when he was there to push a fight with Audley Harrison, there was a riot. No, a proper riot with the lights on and the police walking through the wrecked seating. He might have been innocent of all three skirmishes: Welcome to the world of Herbie Hide.

So, one night in Las Vegas in the summer of 2019, Riddick Bowe was at an old bar telling boxing stories. An hour or two earlier he had been selling selfies inside the MGM; in the bar he was eyeing another gang of eager fans. Bowe’s tumble from greatness remains one of boxing’s tragic modern tales.

“The hardest I was ever hit was by Herbie Hide,” Bowe said. “Damn, he was brave and dangerous.” Most of the people listening had never heard of Hide.

Herbie Hide is, without any doubt, British boxing’s most invisible and forgotten ‘world heavyweight champion’. He is one of British boxing’s lost fighters. Hide’s trip to Las Vegas to lose his WBO title to Bowe is seldom mentioned when heavyweight fights are discussed.

The Bowe fight was Hide’s first defence. He had won the title by knocking out Michael Bentt in 1994, outdoors at Millwall’s stadium. That fight is also forgotten. Hide also regained the heavyweight title, made two defences and lost it one night, when he was the betting favourite, to Vitali Klitschko in 1999. That was a weird night at the old London Arena.

In 1995, at the MGM in Las Vegas, Hide was dropped a total of six times before the merciful ending in the sixth round. He had, as Bowe admitted, hurt the big man. Hide went on to have 22 more fights after that night and remained an enigma and a danger. Hide’s last fight was in 2010, a bizarre Prizefighter appearance at York Hall; he won, but had to withdraw with a terrible cut.

The giant house that Hide built was paid for by the money he made losing to Bowe. A few years later, at a party, a man was killed at the house. Hide was not there at the time. Hide was in a lot of scrapes, that is for sure.

After the loss to Bowe, there was a quick fight for the vacant WBO title when Hide dropped and stopped Tony Tucker in just two rounds in 1997. Hide was just 25 when he regained the title. Hide stopped a lot of his opponents with both fists; he finished his career with 53 fights, 49 wins, 43 quick and just the four losses. When he lost to Bowe, he entered the ring unbeaten in 26 fights with 25 ending quick.

“It just seemed that something would always go wrong,” Hide once said to me. “I get a big fight; I get a win and then something happens, and it all goes wrong.” He was known as The Dancing Destroyer, a name given to him by Darkie Smith one night during a long drive back from somewhere like Preston. Well, that’s the version I remember; there are two or three versions to most Hide stories.

Hide did have some spectacular fallouts with people. There were court dates and legal threats. He was banned from a couple of channels for swearing. He would always apologise later. He did me like a kipper on Setanta and then a few years later, when his book was out, he repeated the word on BoxNation. “You are game for having me back,” he said, by way of a warning.

“Losing to Bowe made me tougher,” he once said. He had the ability to take big men out with just one punch and he could unravel. His two fights with the tough Joseph Chingangu serve as a perfect example of the good and the very bad Hide. Chingangu stopped Hide on a Harrison undercard in a shock, and then was stopped in a round when they fought again. Hide had been battling demons on the so-called safe side of the ropes. Everybody in the Herbie Hide business knew about his struggles, and today he might have got some help. He was, however, accused of some nasty stuff.

“Herbie never had a great lifestyle; I tried to make him think differently and change the way he lived,” said McDonnell. The nail idea, incidentally, was to improve concentration.

And then there are Hide’s crimes and misdemeanours. It’s a disturbing list with convictions, appeals, accusations going both ways, innocence, guilt, being cleared and being in bad, bad company. It’s a sad list of ugliness.

One sunny afternoon in 2007, in Hide’s gated community in Las Vegas, I was over interviewing him in his kitchen when Crocodile, aka Steve Fitch, wandered down from an upstairs bedroom. Crocodile was Mike Tyson’s eternal fixer and mouthpiece. He was a player in Las Vegas. I think Hide was Croc’s next project; at that time, Hide was simply putting a roof over a friend’s head. Crocodile had his child with him. “He’s a cool guy and needed somewhere to crash,” Hide told me with a shrug.

Hide could really fight. It is a pity that he gets no attention for his boxing.  He was better at fighting than he ever was at criminality.