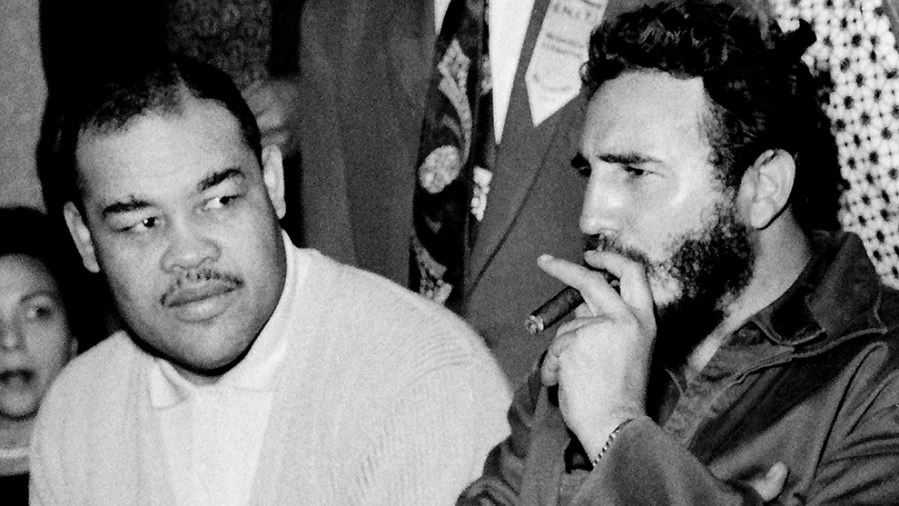 IN December 1959, Joe Louis got off a plane in Havana and went straight to meet the country’s new revolutionary hero, Fidel Castro.

It was the start of a match made in heaven that quickly ended in hell. Poor Joe never stood a chance.

Louis was there as a special guest of Castro at the New Year’s Eve celebrations. Castro had ousted Fulgencio Batista to end a regime in January of 1959. The revolution was won and done, and it was time to celebrate the overthrow of the rotten government. It was also time for Castro to plan an economic future and that is where the great heavyweight came in. And Louis was a hero to Castro.

It was certainly a powerful mix, a show of strength for the country and the images of Louis and Castro on that night are magical. However, back in America, very loud alarm bells were ringing. Damn, those commies were dangerous!

Louis was working with an advertising agency called Rowe-Louis-Fischer-Lockhart, Inc; the former champion made personal appearances for them. Louis had been involved with the agency for over 20 years; he helped recruit clients. He was in Cuba on tourist duty. Make no mistake, Louis was in Cuba on business.

Joe Louis was also about to become a fully-fledged member of the Cold War, an innocent abroad in many ways; Louis was knee-deep in a battle he had no chance of winning. The Soviet advisers were already in the country and the Americans were scared.

Just over two years later, Castro introduced Resolucion 83-A and professional boxing was banned. The best Cuban pros at the time, including Jose Napoles, had sensed the way the wind was blowing and had moved to bases in America and Mexico. They moved permanently and often left behind loved ones. They knew, those first defectors, that they would never return. Castro got rid of boxing because it was “vicious, exploitative and corrupt.” Wow, no change in over 60 years.

It might have all been different if the Louis trip had not led to the involvement of the darkest of dark forces operating at the paranoid heart of the American government. As I said, poor Joe had no chance. The CIA started to add file after file to his dossier. There would be hundreds at the end, and they detailed the tiniest of perceived anti-American slights.

Louis helped put together a delegation of 71 prominent members of the black media, which mostly meant newspapers in 1959. There were owners, editors, and writers. It was called the Joe Louis Commission and Castro’s government officially recognised their work. Their job was to sell and promote Cuba and to make it a tourist attraction for black Americans. The Commission secured $282,000.00 from the Cuban government to promote travel to Cuba. Castro, who was a hands-on kinda guy, was President of the Tourist Institute.

And then it got a bit serious. The State Department in Washington DC moved and moved fast. Louis was seen as a communist sympathiser. He was targeted.

In early 1960, after his trip to Havana, Louis endorsed the travel plan when he said: “Cuba was the only vacation spot where negroes could go without bias.” It was a strong endorsement. And then Castro added his bit: “What would happen if negroes in Southern US, so often lynched, were given a rifle?” That was simply too much for America to stand.

Poor Joe was stuffed. He was threatened with prison, exile, reminded of his precarious tax position and shunned. He had to release a statement and release it quickly. His plan was crashing fast.

“We have nothing to do with Castro or politics,” said Louis. It was a bad footnote to what could have been a glorious relationship.

Louis was under constant CIA surveillance and mounting pressure to end the deal with Castro’s Cuba. In June of 1960, the tourism deal was terminated. It had been a whirlwind romance.

A few months later, Jose Napoles had his 21st and last fight in Cuba and moved to Mexico City; he took a break of a year before continuing his career in exile. Castro’s ban came in at about the same point in 1962 when Napoles fought again. The professional game in Cuba was finished; the amateur game had started. It was at some point in 1962 or 1963 that the great Soviet coach, Andrei Chernevenko, arrived to transform the system. The first Olympic medals came in Mexico City in 1968 and the rest, as they say, is history.

And what a history it is. Excellence in the world’s amateur ring and too much misery away from the spotlight. Cuban boxers became the world’s most expensive cargo and men with speedboats and millions bartered for them. Pirates were involved, drug cartels have been involved and it has been an ugly history of abuse and brilliance. Some boxers have finished their careers with millions and other fighters have finished with nothing.

The great Napoles finished his life as a dancing and singing freakshow, picking up pesos for entertaining diners in restaurants. There are other sad tales of defections that went wrong, careers that never started and families left in poverty back in Cuba.

If Joe Louis and Fidel Castro had been blessed with a bit of luck and understanding in early 1960, it could have all been so vastly different. It would have also helped if Castro had not floated the idea of arming “negroes in Southern US.” It is a great tale.